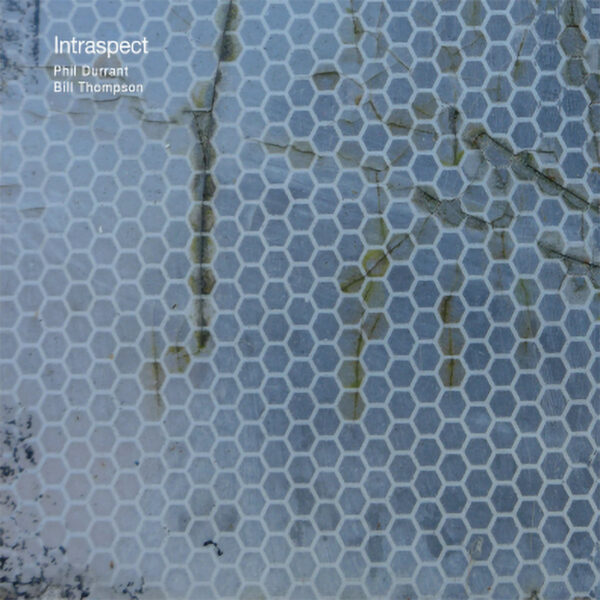 Always ready to welcome a new record by Bill Thompson, our primo-fave rave “king of the drone” from Texas who appears to have found his home in the UK. He continues to run his record label and play his fabulous Moog Guitar set-up to release thick and heavy drones of impassable serenity. What I didn’t know is that he’s been running live concerts under the “Intraspect” banner since 2017, where he’s brought in some outside droners and minimal bods such as Phil Julian, John Wall, and Mark Wastell.

One such is Phil Durrant, the UK stalwart who has lately become the emperor of the Modular Synth, and though he’s duetted with Bill T for a few years now (again, news to me), this is the first time they’d laid it down to wax, record-wise. Also we might add it’s only the third release on Bill’s own Burning Harpsichord Records label, but it’s been a strong chain of cultural sweetness so far if you are lucky enough to own the previous CD and cassette items. Well, you can’t get a cover image much simpler than the “blue honeycomb” effect we scan on Intraspect (BHR003), although the cracks appearing the surface give relief to the eye and trace interesting random shapes across its otherwise orderly pattern. Slip the disc into your well-greased mailbox slot to plug in to 31:18 of droning paradise, one single track and something approaching a milestone in free-improvised noise. Who’d have thought that Durrant, who once skittered with the most skittery of UK players, would have it in him to remain so stable and focused on such as task…well anyone would really, if they’ve been following his work with Trio Sowari and his recent solo release Sowari Modular for Linear Obsessional. But this record is very much of apiece, a solid slab of dronery, one that monoprints any trace of “player’s ego” out of existence by dint of its sheer presence and supremacy. I am getting the expected “healing medical waves” which I expect whenever Bill Thompson is in the house – matter of fact I am lobbying to have him made available as a prescription medicine – but on this occasion we’re also zapped with a healthy stab of wasp-like cruel noise rumblings at key points.

This noise indeed is the aural equivalent to the cracks breaking up them blue hexagons, and it’s not an invasive beat-ye-up noise that the table-toppers tend to favour, instead billowing outwards with as much aesthetic charm as a good electrical thunderstorm from the tropics. Summa: Intraspect may only do one or two things, but it does them highly effectively and memorably. From 24th October 2019.