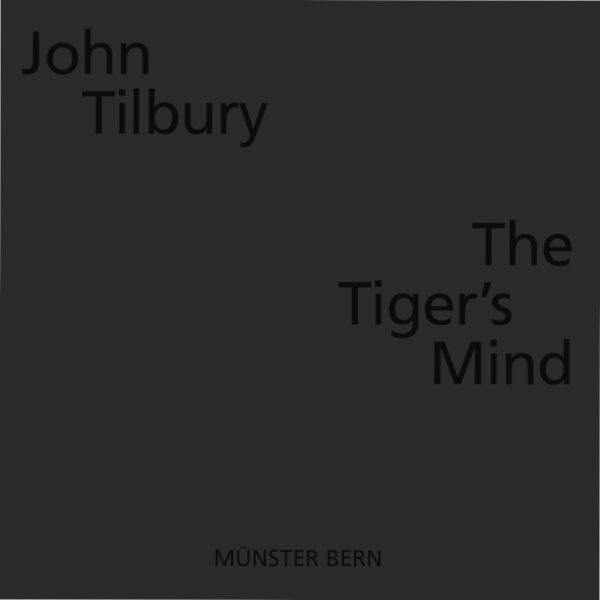 Here’s the great John Tilbury with what’s shaping up to be an essential release. The Tiger’s Mind (CUBUS RECORDS CR372) was performed in 2018 at Münster Bern, is a single 57-minute piece, and has been released by the excellent Swiss label Cubus Records. It’s a solo piano work (with some other interpolations – which we’ll get to shortly) and is based on a text score by Cornelius Cardew. It’s been beautifully recorded and mastered by Fabio Oehrli, and it’s a compelling set of beautiful, mysterious modernist music, interpreted by a grand master.

The story of The Tiger’s Mind is outlined by Tilbury in his concise sleeve note…apparently Christian Wolff heard some music by AMM and made an observation about conventional notation, how their music had nothing to do with that particular aspect of classical composition. Cornelius Cardew (who was one of the early members of AMM) produced this piece as a direct response to Wolff. Except that it’s not exactly a conventional notation, it’s simply a piece of prose which intended as an instruction for a piece of music. It’s short; the whole thing is printed on one panel of the digipak here. It’s a story; it reads like a fable, perhaps a Chinese fable (which wouldn’t be too out of character, considering Cardew’s Maoist predilections).

More accurately, it’s a kind of drama or play; the story contains six characters. You’d have to be a very attentive reader to identify them in the text, but luckily Tilbury does this for us. Since Tiger’s Mind was written as a Sextet, I suppose it was meant as a group piece for six players; this too has other instances in new music, for instance in the sort of game-play improvisation methods which have been used by Chris Cutler, John Zorn, and the Rova Saxophone Quartet, although I’m prepared to believe Cardew – who also championed the use of graphical scores for notation – was one of the pioneers. The intentions are probably different, too; improvisers wanted stories or role-playing to free themselves from playing the same old thing, but Cardew has a certain precision and focus operating at many levels here.

Tiger’s Mind allows for the possibility of there being fewer than six players. The instruction by Cardew is that a solo player can do it, and fill the other five roles by using “people, objects or sound-sources” which can be used as “dummies”. Dummy is also used as a term in bridge, and has quite strict rules about how it applies; I mention this just to emphasise the game-playing aspect here, a game which has to be taken very seriously. We now come to John Tilbury. Evidently, he’s had to exercise considerable skill and imagination in interpreting the piece, and where lesser creators would want to inform us of their genius by printing 18 pages of self-centred text, Tilbury outlines his plan in a few deft sentences. He used recorded sound to take the part of the dummies, so occasional tape recordings interpolate the (mostly) piano music; but he also used the venue itself, that of the Bern cathedral. This isn’t just about the natural acoustics of that grand building (though they do play a part), but also about the character of the place; to use Tilbury’s own words, “Bern fortuitously provides a character in some shape or form which is irresistible”. I’d add that many good improvisers find they are attuned to the “mood” of the room or they venue in which they’re playing, interact with it, and often describe it as a member of the group; Angharad Davies is one such, but I refer you to many other players on the Another Timbre label.

Already we’re getting into intangibles, intangibles which depend on the musician doing the work, and which can’t really be scored or notated; but a text-score like this one by Cardew allows for these possibilities, and indeed this openness is necessary to fuel the work. Of course it helps when the person in question is John Tilbury. Few musicians have done more to interpret difficult modern music, and his heroic efforts with the work of John Cage alone should have won him several medals, but he’s also performed Morton Feldman and Christian Wolff, and – which is news to me – Samuel Beckett. According to the press notes, Tilbury has been performing plays and prose by Beckett for the last ten years, but it’s a connection that goes back even further; for instance, his ‘Beckett As Music’ appeared on Phrênésie #2 – A Space Of Language Experimentation in 2003, and in 2005 Matchless Records released John Tilbury Plays Samuel Beckett, on which he interpreted two Beckett radio pieces with electronics and voices.

I find that The Tiger’s Mind was composed in 1967, when Cardew was still in AMM, one year before he formed the Scratch Orchestra, and some years before he became more involved in left-wing politics and populism (which led him to denounce the same avant-garde he had formerly championed). I mention this because it feels like there’s been a long gestation period between 1967 and 2018, which has allowed Tilbury to realise this incredibly assured and brilliant interpretation of the piece; and the fact that he can spin an hour’s worth of compelling, beautiful music from such a slender source is amazing to me. But the depth and richness may be coming from another place. As an index of the success of the work, I will highlight two observations from the night which Tilbury reported on. One is how the audience were so mesmerised by the work that they looked up into the rafters of the cathedral to look for the birds, which were in fact coming from Tilbury’s tape sources; that indicates, not that the sounds were “realistic”, but that the musician was doing his job in telling the story correctly. The second observation is about the position of the piano. Because the venue was a cathedral, not a concert hall, the instrument was not positioned centre-stage. Evidently Tilbury approved; a lot of his career, AMM especially, involves rethinking the hierarchy and power structures of conventional classical music, and that includes challenging perceptions of the performance space and position of the players, which can reinforce those hierarchies. Anyway…politics aside…this is a tremendous record which gets highest recommendation. From 4th November 2019.