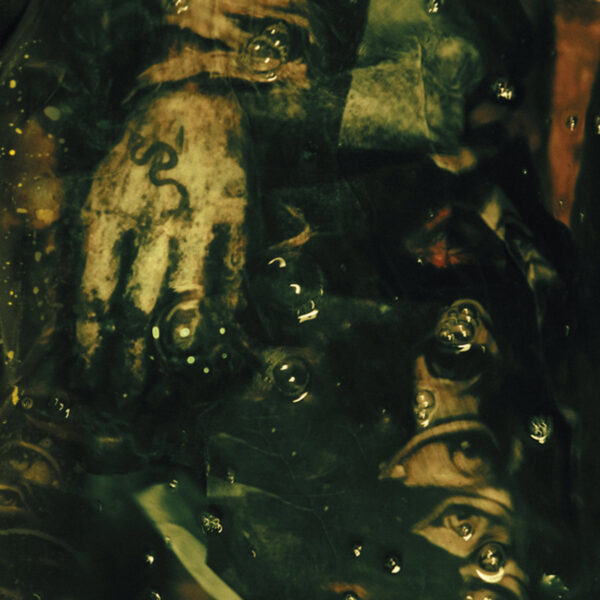 After releasing their fourth album “Värähtelijä” in early 2016, Oranssi Pazuzu took a long break from recording more studio albums and the various members got involved in various side projects including death metal band Three Pound Trigger and a collaboration with fellow Finns Dark Buddha Rising called Waste of Space Orchestra. (For those of us who know Oranssi Pazuzu and Dark Buddha Rising, that sounds pretty stupendous and I’m beating myself up that I didn’t find out about this project much earlier.) The break and the various collaborative activities sure did our citrus-coloured demon heroes a lot of good: “Mestarin kynsi” (“The Master’s Claw”) sees the band leave its black metal moorings far, far behind with the barest of attachments through vocalist Jun-His’ snarling rasp, and launch far out into the worlds of psychedelia / progressive rock with even some free jazz influences and elements. Keyboards and atmosphere have a much greater part in the band’s music and the sonic weaponry that OP wields in creating and painting strange worlds of dark moody psychedelia has expanded hugely. And heck, these guys have even signed a deal with a major metal record label, Germany’s Nuclear Blast: a sure sign that OP are well on the way to conquering the planet!

Every OP album I have heard has been an epic listen in its own right and “Mestarin Kynsi” is no exception. Hearing this recording a few times is the very least required to get a grasp on where our fave psych-BM Finns are heading in their complex sonic universe. For one thing, all six songs on the album are over 7 minutes long and each and every one of them is a dense and heady ride in a very sinister world indeed. For those who understand Finnish, a theme of propaganda and its indoctrination, and the consequences that ensue when bat-shit crazy disinformation masking an agenda collides with reality, informs this work and the nightmares within.

The journey begins with the piano-from-hell melodies and Jun-His’ death-spider vocals along with various keyboard and electronics effects of “Ilmestys” which basically serves to soften up listeners for the punishment to come. The second track “Tyhjyyden Sakramentti” is slightly more familiar Oranssi Pazuzu territory with the frenetic pace and bleached sound, even with the band’s new-found delight in sonic space and space-ambient background effects. As always, Jun-His’ dry croaks do battle with the guitars and keyboards although it seems that much of the time he is coping well, perhaps because the music has a more open and spacious feel with clear-toned synth melodies in parts. “Uusi Teknokratia” (“New Technocracy”) combines elements of progressive rock, industrial metal, black metal, dark ambient of a very moody surly kind and an oddly poppy rhythm structure into a riveting piece of dark malevolence, and is the most distinctive track in the first half of the album. Jun-His’ voice rises to an unbelievably savage and demonic level and the hellish music follows in his direction to deliver sheer metallic derangement in the track’s second half.

The second half of the album continues with the general descent into demented and discordant mayhem with “Oikeamielisten sali” which sounds a bit like a movie soundtrack pulled through a wringer and wrenched into a twisted parody of whatever it was originally. At this point Jun-His is starting to get lost in the music – he probably should consider giving up and getting out of the way of the psych-prog-rock steamroller lurching towards him. “Kuulen ääniä maan alta” is as far from the Oranssi Pazuzu I thought I knew: mad industrial rhythms and machine organ melodies infused with the OP outlook go on a demented lemming death march into near black oblivion. Oops, I spoke too soon: “Taivaan portti” is even more deranged, coming across like a huge dense black cloud of swirling suffocating electronic miasma and the most insane mechanical rhythms.

Each song is truly a unique musical being in itself, inhabited by demons I never knew could exist (and which probably don’t exist at least on this material plane) and potentially on the verge of generating a new musical genre different from what the other songs on the album could generate. Oranssi Pazuzu have outdone their previous work to the extent they have become a completely different band. At the risk of sounding pedantic, the only weakness I can find here is that (as on some of their previous work) Jun-His’ vocals get lost in the sheer volume and density of the music. Apart from that though, these guys have seemingly broken into a new musical universe, the Pazuzu Universe – the music here is completely unlike anything it was inspired by – which is a stunning feat indeed.

Unless anyone else can match what Oranssi Pazuzu have achieved with “Mestarin Kynsi” – an unlikely possibility – these guys will be walking away with the Best Album of 2020 award.