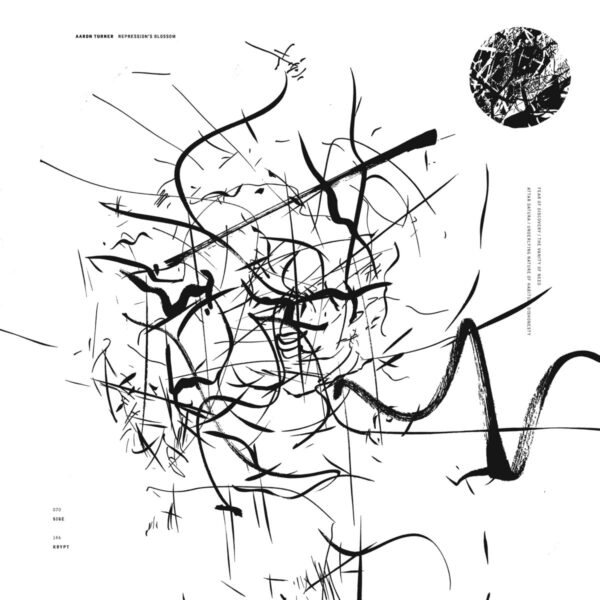 American musician Aaron Turner is growing into an avant-rock hero. Besides being the guitarist and vocalist in Isis, he was also one of the main men behind Old Man Gloom, both bands who I used to collect quite keenly for a while around 2004 onwards. Unsure how to characterise these odd items, though at the time I often filed them next to “math rock” such as Dillinger Escape Plan and Pelican. I particularly liked the very odd parts of Old Man Gloom, with their strange dynamic shifts in volume, their buried voices in unexpected parts of the mix…I can only suppose Turner must have had a substantive hand in the construction of them. And let’s not forget he ran Hydra Head Records and has played in a large number of other rock groups I haven’t yet heard; Sumac seems to be the one everyone likes, but there are about eight or nine others.

Turner has been evolving down a more avant-experimental route in recent years, and apparently there have been collaborations with Haino, Brötzmann, Merzbow, Stephen O’Malley and Kevin Martin, all of which sound interesting (though not sure if they always resulted in records). He’s here today with a solo record of guitar noise, Repression’s Blossom (SIGE RECORDS SIGE 070 / EKTRO KRYPT 141). Well, it’s probably more accurate to describe it as a “layered” record, involving effects and overdubbing and tapes, maybe even some feedback, which has resulted in the creation of abstract noisy backdrops over which our man lays down some heavy guitar blasts. I say this in case you were expecting to enjoy the sound of one man feeding back into his amplifier in an uncontrolled manic fashion; on the contrary, Turner is clearly a fellow who likes to sculpt his noise patiently and carefully. Apparently this is his first solo record.

It’s got a lot of the things I liked about Old Man Gloom, including the mysterious logic that compels him to stop and start unexpectedly and alternate between moments where he broods contemplatively, before smashing up mountains with his big iron fists as he erupts into sudden violence. I suppose one difference is that Old Man Gloom were doing it in the context of song-form and semi-commercial considerations for metal fans, while this Repression’s Bloom could be read as an all-out art statement. It’s also not at all like Isis, whose brilliant music I mostly recall as following an incredibly rigid tempo (their drummer must have been trained with the US Marines), the better to deliver their steely karate chops of guitar roarage. Conversely, this solo record is fairly free-form, admits of no borders or boundaries, and Aaron Turner follows his muse wherever it takes him. While there may be one or two longeurs on ‘Attar Datura’, this record mostly succeeds very well, particularly on ‘Underlying Nature of Habitual Dishonesty’, which is like hearing a sermon from the mountainside delivered by a particularly fanatical black-garbed preacher with a baleful glare; and ‘The Vanity Of Need’, which just seethes with implied violence and bitterness and expresses itself in broken chunks of anguish.

The only complaint would be that, as an LP, it’s kinda short; side one is less than ten mins, and side two barely gets past the 15-minute mark. Even so, this brevity actually works heavily in its favour. Now feeling like I really need to investigate more of Turner’s recent collabs, besides revisiting my Old Man Gloom LPs. Great stuff! From 27th November 2019.