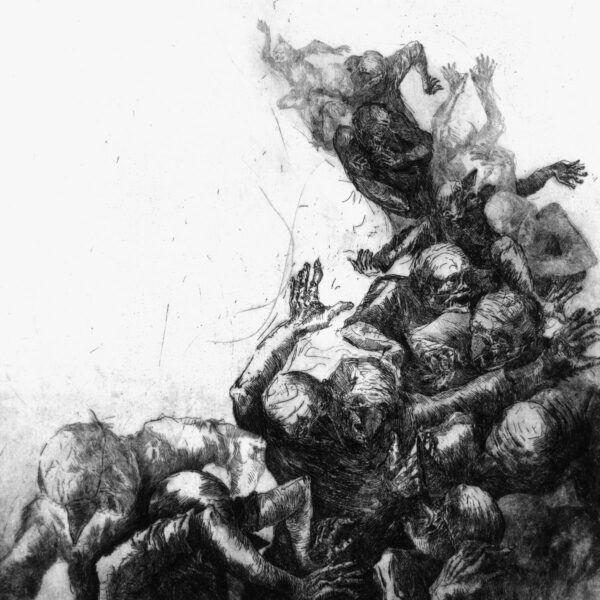 Now for a concept album of Norwegian gloom delivered by Norway’s finest noise-rock combo joined by a doomy percussion-vocal group…the album Vi Som Elsket Kaos (CONRAD SOUND CNRD327) has been made by the trio MoE collaborating with the Pinquins percussion group, and is based on a literary source, about which more shortly. We heard MoE on their Tolerancia Picante record from this same label where they added their own brand of punkified, angry rock noise to the disaffected sax blasting of Mette Rasmussen, and created a shocking statement from which a hundred chauvinist men in grey suits are still reeling. Their guitarist Håvard Skaset, and bassist Guro Skumsnes Moe, were also heard on the conceptual acoustic-noise creaker Harpoon, with Lasse Marhaug. Pinquins as a group are new to these pages, but the threesome of Ane Marthe Sørlien Holen, Sigrun Rogstad Gomnæs and Johanne Byhring are clearly strong players when they’re given a martial snare drum to beat, and rise to the task they face. We must single out Holen as a major player; among other things, she’s a member of the great Ensemble neoN, and has a respectable background in conservatoire and academic training. Pinquins also supply most of the vocals on this Kaos fest; said vocals are a combination of singing, spoken recits, dramatic actor-like performances, and even some impassioned shouting when the text demands it. Although there are lighter moments, they mostly come across as pretty severe, their voices holding a warning for mankind; this much is clear, even to a non-speaker like myself (the entire album is in Norwegian and there aren’t even English translations in the lyric booklet).

This brings us to the core themes of Vi Som Elsket Kaos. The piece is based on the work of Jens Ingvald Bjørneboe, who is regarded as one of Norway’s most important post-war writers. A poet, playwright, novelist and essayist, his most well-known work is a trilogy called The History Of Bestiality. It’s the first book in that trilogy, Moment Of Freedom, originally published in 1966, that has formed the inspiration for today’s record. I never read a page of Bjørneboe, but I guess it’s fair to say he took an extremely pessimistic and critical view of modern life, and the themes that concerned him here were individual liberty and the ways that freedom is crushed by the authoritarian state; by the end of the trilogy he had scaled this up into a world-view that condemned all abuses of power across the whole of Western society. Happy to call himself an “anarcho-nihilist”, Bjørneboe challenged authority whenever he could and courted controversy throughout his life; he also suffered from chronic depression, became an alcoholic, and killed himself in 1976.

Since Moment Of Freedom is in the form of a novel, it’s been possible for MoE and Pinquins to recast the story of the main character into the songs and pieces we now hear. The narrator was apparently the clerk of a court in Heiligenberg, where he observed frequent abuses of humanity and recorded them in his personal “history of bestiality”. I suppose it’s the voice of this character we’re hearing in the anguished music on the groves. Evidently, wild changes of mood are called for; the music can be impossibly grim and slow, such as on the interminable ‘Det Sorte Hull’, or rush past at an alarming rate in a state of near-panic, such as on ‘Den Ubehagelige Behagelighet’. A piece like ‘God Natt!’ is quiet, restrained – like a child singing a carol in a deserted classroom – but I suspect it contains a bitter message of futility. On ‘Drommen’, the penultimate cut, the music becomes a steady, resigned plod of foreboding bass pulses and impatient, twitching rhythms, while the narrating voice speaks with a dreadful, clear-eyed finality. There may be some “macabre humour” in places, as promised by the press notes, but one is left overall with a feeling of complete desolation and despair. I’m not sure if the record – or the novel – details the mechanisms by which the state exercises its power to keep us repressed and unhappy, but I am clear after playing Vi Som Elsket Kaos that the situation is very serious, and absolutely nothing can be done about it.

The label seem keen for the audience to appreciate the depth and complexity of this release, even comparing it to reading a novel; to appreciate it properly may require calling on old-fashioned skill-sets such as literary comprehension and understanding of character development. We’re even admonished to “go back to the CD player…sit down and experience the journey”, suggesting that to consume it any other way would compromise the integrity of the text. Even the package of the gatefold cover and the printed booklet have a classical simplicity and elegance, tending to confirm the literary aspirations of Vi Som Elsket Kaos, which translates into For The Love Of Chaos. In its form, it almost reminds me of certain operatic pieces by Stockhausen that used speech-singing, such as the Licht opera cycle; and given its engagement with contemporary problems, and the seriousness of its intent, I’d suggest this record deserves to be included in such company. Recommended. From 27th November 2019.