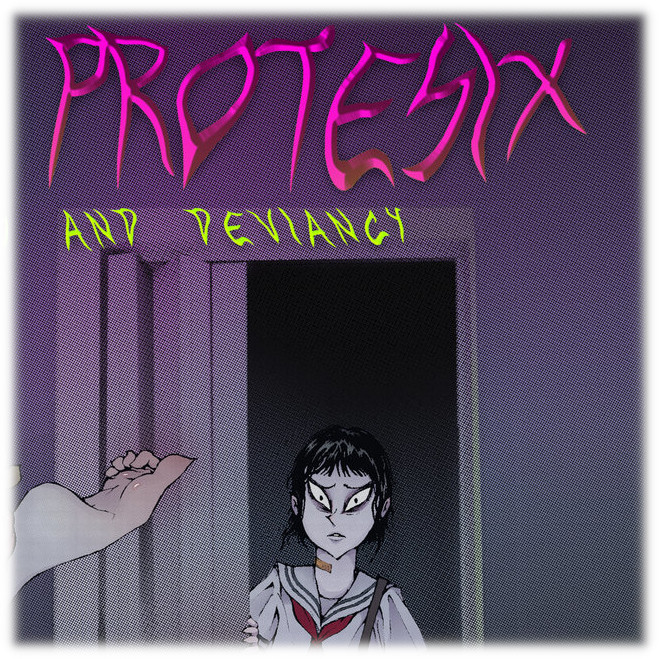 Latest vinyl item of irritating noise from Venta Protesix is Loneliness And Deviancy (URBSOUNDS [/] URB046), a purple vinyl pressing housed in a lurid cover which I may suppress from the blog today, depending on how prudish I’m feeling…we’ve been hearing product from this Italian fellow (who might be Italo Belladonna) since around 2016, when he set out his stall in no uncertain terms, openly declaring his addiction to self-abuse and boasting of his comprehensive internet porn collections. His noise concoctions have followed suit, with provocative album and track titles where no subject was too obscene for inclusion, and the music was always a fast-paced, delirious ride through a dangerous internet session as lethal as a minefield, where sex-traps, pop-ups, trackers, and multiple window-opening were the least of our worries.

For today’s item, I’m wondering if Venta is starting to develop as an “artist” or if he’s dialling-down the obnoxio factors by a few degrees…what once was loud-volume, shrill, excessive and repellent din is starting to sound a lot more accessible, musical even…he’s playing more attention to dynamics, balancing a range of timbres and textures with a certain amount of dexterity, and even allowing the odd tune to creep into the shark-infested lagoon of erotic thrills. There’s even more variety in the tempo and the mood of the pieces, particularly (as the track titles suggest) he’s attempting to portray a certain amount of remorse and melancholy in the work. Just about every track title speaks of the regret and rue felt by many a sex addict when they come to their senses next morning after a night of debauchery, and the author tries to direct an unblinking eye on what really happens to a human when any emotional connection is so emphatically disconnected from the act of love.

This all feels a lot more grown-up than the callow youth who gave us Anni Di Masturbazione in 2015, unrepentant in pursuit of his solitary pleasures and pretty much telling the audience to “deal with it”. However, if his music is mellowing, the sleeve art is doing just the opposite…two Manga-styled drawings by David Genchi adorn the front and back cover of Loneliness And Deviancy, both of them coloured in nocturnal shades redolent of decadence and despair. While the back cover image might just evoke our compassion, the front cover goes all-out to outrage and shock us, touching on such sensitive topics as bondage, amputees, mutilation, and blood-letting equated with sexual orgasm. The lurid act is witnessed by a mute girl wearing the Japanese sailor-suit outfit beloved by fetishists around the world, and the grim scene is reminiscent of that Anime sequence inserted into the first Kill Bill movie by the loathsome Tarantino. Harsh digital cybersex-themed noise for the jaded mind…use carefully. From 30 October 2019.