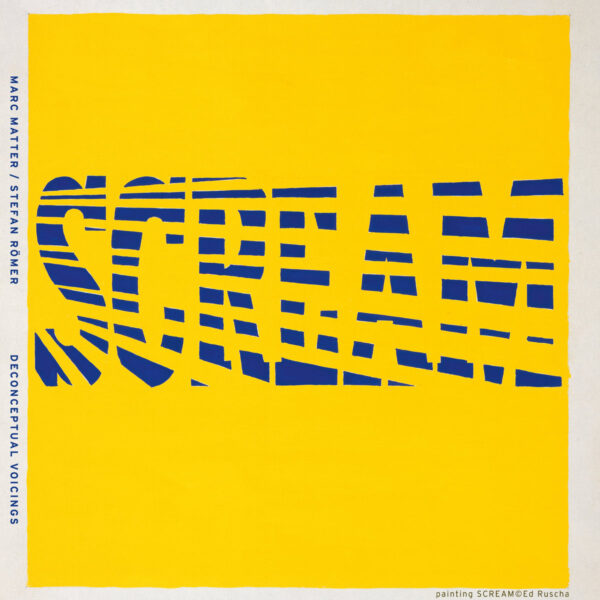 Last noted Marc Matter with his 2014 cassette when he called himself Voiceover and produced Nervous Breakthrough for Tanuki Records, effected by reworking tapes and samples of his own speaking voice along with other elements (such as turntabling). He’s here today with Stefan Römer, and the pair have teamed up to create Deconceptual Voicings (SLIMVOLUME #10) for this London-based label; Stefan Römer is a new name to me, but I find he made a record called Die Erweiterung Des Alphabets in 1988 for the German label Laurel Productions, which evidently made use of cut-ups and sampling in an attempt to make a statement about how “politicised” words can become.

Today’s record applies this cut-up / sampling / montage technique to a different source, i.e. recorded interviews with eight visual artists, mostly American, mostly 20th century. Over eight tracks, Matter and Römer give us fragmented highlights of the speeches, then attempt to turn them into some kind of musical form. They do this largely by adding a form of beat-boxing as a backdrop, so the artists appear to be speaking in time to a rhythm; or by cutting up the phrases and looping them, so they appear to be rapping or singing. The musical components, such as they are, sound like they were made by someone who just bought a toy Fairlight and is trying to play a nursery rhyme based on samples of them saying a rude word. I’m not impressed, in case it’s not yet clear. Matter and Römer are not doing the artists any favours with these interventions, and failing to add any insight or understanding of the work of Rosler, Ruscha, Fraser, Weiner and the others. I do appreciate what they’re trying to do on the Sol LeWitt piece, where by parsing the phrase “idea of a serial progression” into segments and looping and repeating them for a long time, they manage to convey in sound what a serial progression is like. Well, big deal. I’d much rather just hear Sol LeWitt speak for himself, or better yet just look at one of his artworks; do so yourself, and you’ll soon understand what he means by a serial progression, and why it’s important to him. Conversely, this 5:20 track by Marc Matter and Stefan Römer is simply a heavy-handed over-simplification of the concept, which labours the point into the ground.

The working method of the duo is explained on the back cover with a simple workflow diagram, which superficially looks like a piece of conceptual art in itself, but when you look into it the lack of structural integrity, and complete absence of true intellectual understanding, quickly becomes evident. For the record, I regard the artists represented here as extremely important representatives from the worlds of pop art, conceptual art, performance art, and dance, and they are ill-served by this tacky record. Their words, which were intended to inform us about their practice and their ideas, have become just one more sampled voice for dilettantes to play with. Avoid this phoney record! From 18th November 2019.