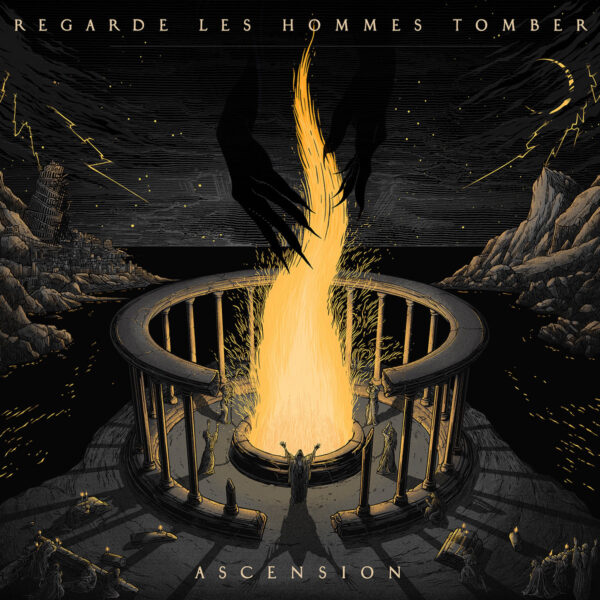 Since releasing second album “Exile” way back in 2015, this five-piece French band has been quiet with regard to new releases but elsewhere these guys have been busy, signing up to Season of Mist and rethinking and refining their style and approach. While previous albums were a mix of melodic post-BM / sludge / hardcore with very raspy BM vocals, third album “Ascension”, RLHT’s first for their new label, has a more robust feel with a stronger and more varied vocal performance. There is a very strong emphasis on actual songs with definite riffs and melodies, and the bleak melancholy mood can be deeply felt. The band seems to be angling towards a mixed underground / alternative mainstream metal audience so the sound is slightly more commercial than what it has been in the past and the style of music sometimes incorporates elements from death metal and maybe other well-known French underground metal bands like Deathspell Omega (herreafter DSO).

After a short soft and mostly ambient introduction, “A New Order” starts the album proper and promptly stamps its style on what will come: a defiant mix of epic melodic BM with anguished singing and shrieking, a cold atmosphere and lots of speed changes ranging from speedy blast-beat bursts to mid-paced swank and drawn-out guitar drones, and a brief bit of acoustic stillness. Parts can be bombastic and highly theatrical as reverbed singing goes into chanting or shouting overdrive. The band really throws everything into this track, making for a frenzied roller-coaster ride through so many dark and desolate parts of the underworld that you wonder if there’s going to be anything left for the rest of the album to cover. And herein lies the problem: much of the rest of the album does turn out to be revisits of the same territory as set by “A New Order”.

It’s with track 5 “Stellar Cross” that the album becomes more interesting with a dark jangly guitar sound that may owe a debt to DSO and others that have followed in that band’s path. The mood becomes anguished and introverted, and the atmosphere feels oppressive, even suffocating with the repeating jangle riff. At last we have a song with some individuality due to a change in mood and a turn towards darker brooding music that sometimes has an exotic Middle Eastern feel. The track is followed by a doomy instrumental “La tentation” which for once shies away from the constant changes in style and speed and instead relies on a steady buzzy guitar drone that builds up to a climax in layers of sound and intensity. Outro track “Au Bord du Gouffre” returns to the aggression and hostile attitude of “A New Order”, the constant jumping from one riff or melody sequence to another and the mix-up of different speeds, escalating in intensity to a frenzied and deranged conclusion.

By the end of it all though, listeners might pretty well feel they’re back at first base without having journeyed much at all through RLHT’s sonic universe. The album begins with one very good track which ends up overshadowing the rest of the album until the last three songs – but many people might not last the distance just to hear those few. “Stellar Cross” and “La tentation” show that the band is willing to experiment with aspects of its sound and blackened sludge style, and there should have been more of this experimentation in earlier tracks. While the music is solid, the musicians have put in a lot of effort and the production is very good, the band’s style and sound probably needs to be thicker than it is – it can be thin in parts – and grittier as well. The singing really needs music to complement and contrast with it, and to emphasise the lyrics and their message of defying God and the consequences that follow.

“Ascension” completes the trilogy that began with the self-titled debut and follow-up “Exile” so the next (and fourth) album will be a new beginning for the band. By then, RLHT may have the robust and dense sound their music and lyrics deserve, and their song-writing abilities will have matured as well.