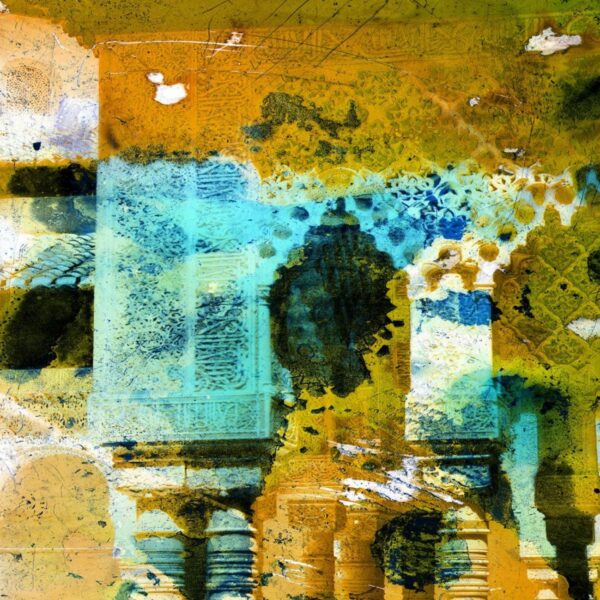 Have heard a couple of charming musical forays from UK genius Stuart Chalmers in the past, for instance Fata Morgana in 2018 and Daydream Empire in 2012. He recently teamed up with Claus Poulsen, the Danish musician who forms one half of Star Turbine with Sindre Bjerga, and the result was this lovely cassette Fictions In The Age Of Reason (APHELION EDITIONS APHELION014-CD), decorated with a deliciously murky cover print that seems to suggest faded, distressed images of forgotten civilisations, their architecture, and their wallpaper designs.

On the tape we have four tracks of music that has its head in the clouds and is not afraid to while away the hours in productive free-form daydreaming, thinking about times past and wondering about events that probably never even happened. This is the kind of fleeting, evanescent music that somehow evokes nostalgia for childhood and longing for a lost home in the green hills of Earth. They do it with lots of tape loops, layers of percussion, gently chiming guitars, and musical effects which can only be described as “shimmering”, creating a busy but not over-cluttered tapestry which, at its best, resembles a clockwork music-box from Heaven. Parts of this reminds me of Skaters, that hyper-prolific Californian duo who managed to arrive at a similar space though through different means (I think it involved hacking into karaoke machines, or something).

With their titles such as ‘Sky Rivers’, ‘Earth Dance’ and ‘Eclipse’, Stuart Chalmers and Claus Poulsen indulge their nature-boy tree-hugging inner selves making a trip to a sunlit pastoral Neverland without being sentimental or twee about it, and indeed the entire album is genuinely affecting. Chalmers has been known to make music by treating and splicing old cassette tapes, but Fictions In The Age Of Reason feels much more like a “performed” record, as though the musicians were playing it all the way through, with just a light patina of permitted dream-like gauze distortion suspended over the recording for extra wistfulness. This also takes us one remove from the somewhat grittier and noise-embracing world of Star Turbine. The tape closes with ‘Phantasmagorica’, a lovely made-up word that indicates a journey to the spirit world where the ghosts are mysterious, but also friendly and welcoming. If you enjoy Kate Bush’s ‘The Ninth Wave’ suite which occupies side two of her 1985 album, you will certainly enjoy this record. From 23 December 2019.