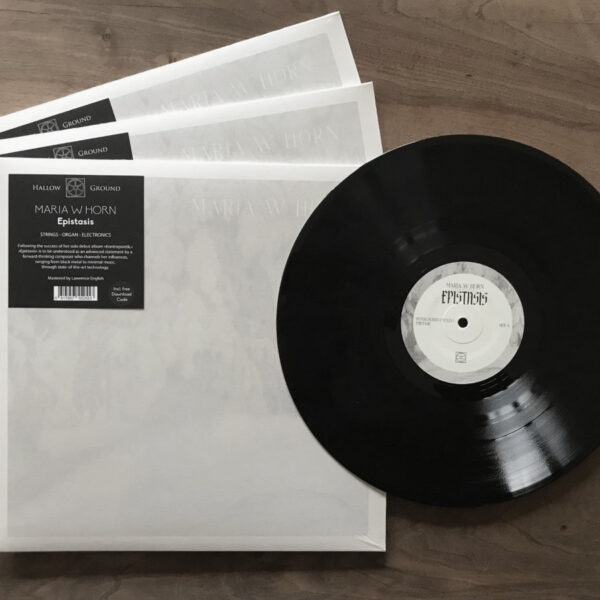 Hailing from Ångermanland in northern Sweden and currently based in Stockholm, Maria W Horn works with electronics, digital and analog synthesisers, acoustic instruments and audiovisual tools and techniques to explore human perception and how psychoacoustic phenomena, the audiovisual senses and changes in perceptual stimuli (especially if overloaded or severely restricted) can combine to transcend everyday life and induce changes in consciousness and mental states. “Epistasis” is Horn’s second solo work (after “Kontrapoetik”, released in 2018 by the Portal Edtions label and XKatedral, the latter co-owned by Horn) and her first for the Hallow Ground label.

The title track of this work was originally composed for a string quartet and was first performed live 2018 with the musicians’ playing doubled by distorted and processed recordings of their work. Horn adds a layer of overdubbed electric guitar feedback; the result is a very sorrowful and piercing droning piece of blackened ambient electroacoustic music. As this music progresses, the mood changes to contemplative, even a little hopeful, and there seems to be a spiritual aspect as well. Another track that appears equally spiritual and meditative is “Konvektion”, inspired in part by Estonian minimalist composer Arvo Pärt’s technique of tintinnabuli in works where the music consists of simple notes or tones that seem to vibrate constantly (parallel to black metal’s use of tremolo guitar chords) and rarely change tempo. This track features the most sparse music and yet it seems the most intense and spellbinding just by its place perhaps in the whole recording.

The tracks that bookend the album are part of a series “Interlocked Cycles”, exploring the notion of authenticity and artificiality, using a computer-controlled Disklavier piano to play the main melody while electronic drone ambience plays in the background. Both parts I and II feature changes in pace and tone amid the repetition resulting in changes in mood, and a narrative seems to develop resulting in both pieces sounding complete in themselves.

Each track takes the listener on a deep brooding journey that may involve self-discovery even in very limited sound environments. Sometimes the last few moments – or even the very last minute – of a piece may be a contrast to what has come before and the listener may end up feeling quite a bit conflicted about the piece’s resolution as opposed to the music that developed and which invoked whatever perceptions and feelings the listener may have experienced up to the climactic point. The album might present as a collection of sound art pieces but all of them are united in the way they may over-emphasise or suppress melody and tone to achieve emotional effects. Epistasis (referring to the interaction of different genes in cells, leading to the actions of one gene being suppressed by another gene’s actions: an example being the way genes for dark hair suppress genes for red hair in humans) is a very apt title for this recording.

As an aside, I looked up Ångermanland online, to see what influence growing up there might have had on Horn’s development as a sound artist with her particular interests. I discovered the area, historically a province but now broken up into different administrative regions, has a history of socialism and industrial conflict – a 1931 incident involving the military shooting on unarmed civilians to break up a general strike in Ådalen in the area has become famous in Sweden – and since the 1970s has been spiralling downward in a cycle of social and economic depression and disintegration with people leaving the area to find work and the dismantling of social services leading to more job losses and more unemployment. One can see parallels with Ångermanland and many parts of the English-speaking world (the Midwest in the US, northern England in the UK) in their deindustrialisation, and how these areas end up being demonised by urban elites as racist and ignorant despite past histories of workers fighting for their fair share of wealth and ownership and the popularity of socialism among them.