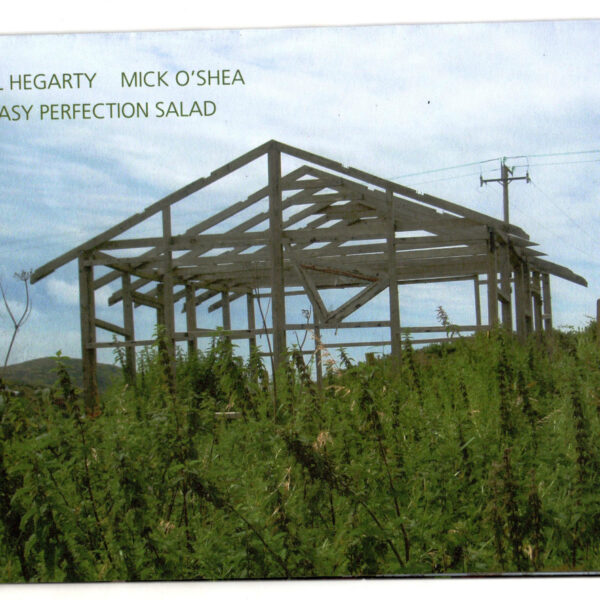 We’ve been receiving good records from the Irish Farpoint Recordings label for some time now. More than many labels operating in an experimental music area, the curators here cover a lot of ground – field recordings, minimalist, electro-acoustic, noise, tape assembly – but they have never released a stereotyped record or anything that falls too comfortably into generic conventions. Today’s record Easy Perfection Salad (FP 045) continues this welcome trend to a large extent…it’s really hard to pin it down, it’s not exactly clear how the record was made, and the printed credits remain largely silent as to who was doing what. Add to this mysterious bundle the rather enigmatic cover wrapper, which unfolds into a set of photographs (the label calls it a “visual essay”) of a barn or house being erected in the countryside, but electing only to show us the timbers that form its wooden skeleton. Perhaps the photographer, Irene Murphy, is just trying to tell us something about building; the music on Easy Perfection Salad sometimes feels like it’s being put together right in front of us, starting from almost nothing. It’s as though the creators arrive on an unpromising-looking site of materials, and set about patiently piecing together something new. What was it that Derek Bailey liked to say about the Company Week events? Didn’t he use a building site metaphor?

The imaginative and subtle creators Paul Hegarty and Mick O’Shea apparently played all the sounds live on Easy Perfection Salad, doing it at The Cork Artists Collective in Sherkin Island and in a venue called The Guesthouse in Cork. They’re credited simply with “found and prepared…materials”. We might be hearing some musical instruments, and there is certainly some electronic or amplified processing going on, but it might just as likely be made using “objects”, that useful catch-all phrase that comes to hand to describe musicians who use junk, bricks, metal, and any non-musical physical item in the world that might produce a sound of some ilk. I’d like to point out that Hegarty and O’Shea are exhibiting ingenuity and restraint with their approach across these long and mysterious tracks, particularly on the major centre-pieces ‘MEAT trimmings’ and ‘MEAT render’. Here, the work reminds me most of the sort of cluttered-stage malarkey that Guido Huebner used to practice in Berlin since the 1980s with his Das Synthetische Mischgewebe projects. These were events whose boundaries it was hard to trace, and like today’s record it wasn’t at all clear what was happening to produce the bizarre and puzzling sounds that made it onto vinyl or CD. But where DSM sometimes didn’t successfully transfer their intentions across, or stopped short of creating a compelling listening experience, these Easy Perfection Salad tracks just keep on giving. Giving, that is, in a very low-key and intriguing manner. Given the quiet and unhurried pace of this lovely record, it might be worth reminding ourselves that half of the act, Paul Hegarty, has long been associated with harsh noise (particularly in the band Safe), and has run the label DotDotDot music to publish international choice gems of electronic obnoxia. It’s good to learn he has other resonating strings to his Dobro. As to Mick O’Shea, I don’t think his presence has graced our pages in the past, but he has been represented before on this label, on the Soundcast 4×4 record in 2010 and as part of his duo The Quiet Club (with Danny McCarthy). More directly relevant might be his membership of Strange Attractor, an affiliation of artists which includes said McCarty and said Irene Murphy who did the photo essay, plus David Stalling and Farpoint label boss Anthony Kelly.

A fascinating and distinctive release which will win you over with its gentle pace and very organic approach to sound-art creation and recording. The opening cut ‘Vegetables 1’, which has a buried vocal somewhere in its swampy mix, may throw you off the scent a little and lead you to expect an entire album of wayward avant-garde songs, but it’s uncharacteristic of the remainder of this Salad. Very good. Arrived 31st December 2019.