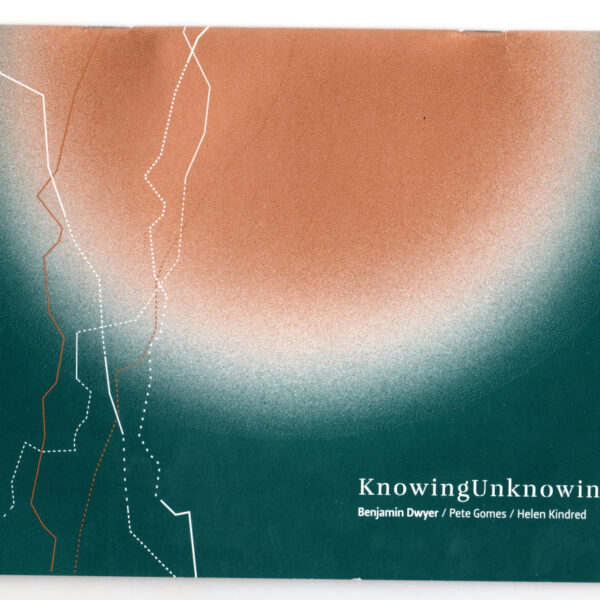 KnowingUnknowing (FARPOINT RECORDINGS fp065) is a package featuring the work of Benjamin Dwyer, a guitarist whose work is new to me. I see he’s an important player in international orchestras, and while he’s a classical guitarist he also does free improvisation, composition, and is known as a musicologist. I see he’s recently made some recordings with Barry Guy’s Blue Shroud Band (not heard by me), and is a champion of new music in all its forms.

On the CD part of this set, you can hear him playing a number of modern compositions for the guitar, written by David Fennessy, Peter Moran, Judith Ring, and Paul Hayes; the four short pieces by Hayes include a tribute to Morton Feldman, which may help orient the listener. Or perhaps not; Feldman’s studied patterns and repeats can be quite restful, yet I was left with an impression of musical restlessness by most of this disc, with Dwyer intent on demonstrating many modes of musical expression and many styles of guitar-playing. For the latter, it’s relatively easy for me to point to techniques such as harmonics, hammering-on, muffling, and scraping the strings to produce textural roughage, but then you also have to account for his near superhuman abilities when it comes to executing complex atonal runs at high speed, while also admiring his uncanny skill at holding long notes while producing an incredible ringing clarity. Not a fluffed note anywhere on the album; not many guitarists can boast of attaining such craft and dexterity in their music.

For the former, I’m on much shakier ground in appraising musical modes, but for what it’s worth I sense that Benjamin Dwyer rarely fits the mould for whatever pre-determined genres you want to bring into the factory. Lots of melodic phrases and tunes across the whole sweep of KnowingUnknowing, but probably too melodic for your average Derek Bailey imitator who’s intent on following Bailey down the Webern route; yet most conventional classical guitarists would fold up in terror at the prospect of executing some of these complex and harrowing scores, a task which our man evidently relishes. I won’t say he makes it sounds easy, but you can tell he likes getting his teeth into all this density, this richness, this earthy dissonance.

The whole record is great, but the piece that really hit home for this listener is Dwyer’s own composition ‘KnowingUnknowing’, a three-part epic which ends the record and is the most intense 30 mins of acoustic guitar music you’ll hear this year. I have rarely encountered such bravado and passion in the improvisation genre before…some astonishing gestural sweeps of the right hand produce amazing effects, there are dynamics in volume and tone that rival any orchestral work, and there’s a concern with rhythm and regular pulses that should please all the die-hard Steve Reich fans among you. Dwyer produces music as lush and detailed as a Harry Partch instrument (not that he’s trying to imitate the Kithara or Harmonic Canon) and is as adventurous as Robbie Basho when it comes to exploring non-Western harmonies and tunings.

I’m only scratching the surface of this impressive piece of work, but hope to direct you towards picking up a copy and doing all you can to discover the music of Dwyer. KnowingUnknowing is also the name of the dance piece on the DVD part of the package, featuring the dance of Helen Kindred and filmed by Pete Gomes. I haven’t yet played this part of the release, but we must at least mention Dwyer’s membership of the Coterminous collective, which has the explicit aim of bringing together the three disciplines of music, film, and dance, indicating he has had a long-standing commitment to this broad-minded and culturally voracious philosophy. From 31st December 2019.