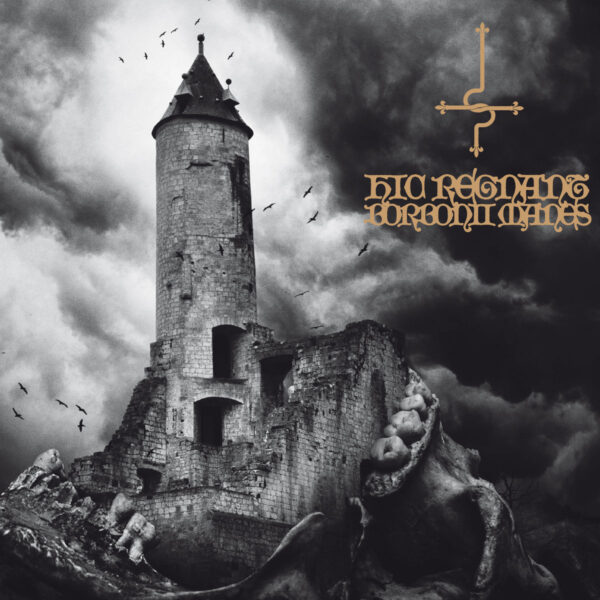 I read that Suhnopfer, the solo melodic raw BM project of Ardraos (whose long rap sheet includes a stint with Peste Noire), took five years to record this, the project’s third album. “Hic regnant Borboni manes” translates into English as “Here lies the Bourbon spirit” which refers to the mediaeval province in France where Ardraos himself was born so the songs are a homage to the people and the culture they created in this area. Some of the music of the historical Bourbonnais province is included in the album as well. All this should suggest that ” … Borbonii manes” should be a very individual, even quirky and eccentric, recording with a strong flavour that might even be a bit quaint and twee to listeners.

As usual, the crystal ball in my head is dead wrong – the album does have some mediaeval tunes but they take up less space on the album than I thought they would and those tunes turn out not to be very well integrated into the black metal songs proper. After the brief instrumental introduction, it’s damn-the-torpedoes-full-speed-ahead for the album with barely any pause, apart from the little spaces between songs. “Penitences et Sorcelages” sets a cracking pace with nuclear-powered synth drumming turned up to the max and layers of guitars and bass similarly shredding so fast that even the sawdust flying out of the fretboards get shredded into finer dust particles. Riffs change faster than they can be spat out. All this frantic whirlwind buries the vocals in a deep cavern where they howl and screech, and occasionally put in lines of lyrics. As it turns out, this track sets the standard for much of the rest of the album to follow – not even the title track escapes the furious blur of raging music and vocal roar. (I’m sure I heard a mandolin playing somewhere in the title track but it’s all but swept away by the BM storm.)

It’s really unfortunate that the album gets swept away by its own excess energy and passion and supersonic speed (the main non-mediaeval thing about it) because the album does show a lot of impressive technical skill and good song-craft, and really does sound as if a full band, and not one multi-instrumentalist, is performing all songs. Some very good riffs and melodies are present but when so many are packed into each and every song, and literally get blown away by the force of their own momentum, they all end up sounding much the same. The constant screaming down in the abyss becomes monotonous as well. The one track that stands out is “Je Vivroie Liement” (Old French for “I should live a happy life”) and that’s only because of brief passages of acoustic guitar music featuring hundred-years-old tunes from Bourbonnais culture.

After the album ends and the screeching finally dies down, there’s hardly anything I can remember from this work – it sure cleaned out my head. This Bourbon spirit might leave other listeners feeling the same with few of the benefits of the alcoholic American version.