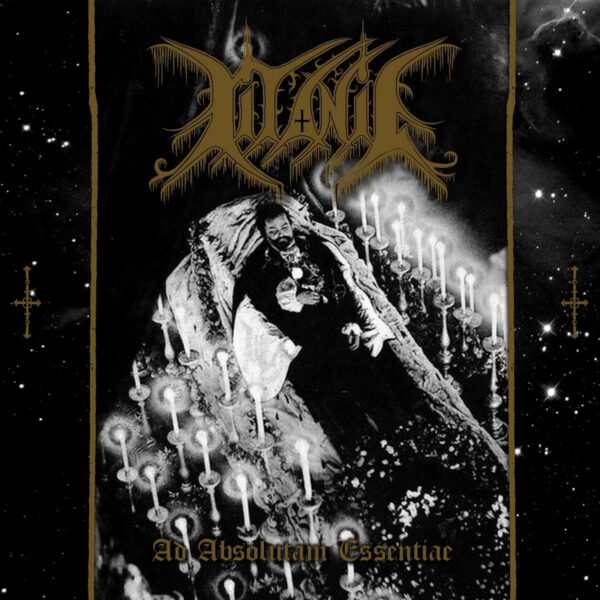 As French mediaevalist BM bands go, and the ones I have heard so far have been very good, the trio Litanie are on another planet altogether: the music on this album, originally recorded back in 2015 but finally getting released on a label in June 2020, is as tough and extreme as it is possible for raw uncompromising yet melodic BM to be. The music has a definite industrial metal feel to it, even as it delves into near-acoustic dark folk or bluesy urban post-BM territory. Unusually perhaps for this genre of French ritual mediaeval occult BM, nearly all tracks save for one on this album are instrumental.

The tough searing near-industrial template, cranking up an absolute racket of sharp grinding chainsaw guitar noise and crashing percussion, is established with intro track “Carnalis Mortis” and continues in a slightly more relaxed and slower way, with more emphasis on melody, in “De Profundis Inter Mundis”. The mood ranges from anger and aggression to deep sorrow and tracks can be very intense. Possibly some lyrics on most tracks might have helped to focus attention and emotion, and the music could have drawn inspiration from a few lyrics and flown onto extended riff-based instrumental journeys. Indeed on a punk-like track like “Esse Infinitum”, with chunky guitar riffs and choppy percussion rhythms banging out in huge slabs, you expect some short terse lyrics to be spat out somewhere in the background. Instead a deranged lead guitar solo zings off on its own squiggly trip above the noisy blocks of guitars-n-drums cacophony crashing down on your head one after the other.

Most tracks are very good and solid and quite a few vie for best track of the album: “Carnalis Mortis” is a powerful thumping monster with a moody dark ambient orchestral alter ego and “Esse Infinitum” is awesomely good in its own way but “Praeter Tempus” takes the cake with its deeply oppressive Satanic atmosphere and an experimental ambient approach in which malevolent demon voices, alien noises and an insistently hypnotic tribal style of drumming combine into a horrific and overwhelming soundtrack.

Taking occult mediaeval BM into another, more unstructured ambient universe pays off very handsomely for Litanie on this, their second album, which surely is a contender for Best French BM album of 2020, at a time when French BM seems to be experiencing something of a Golden Age.