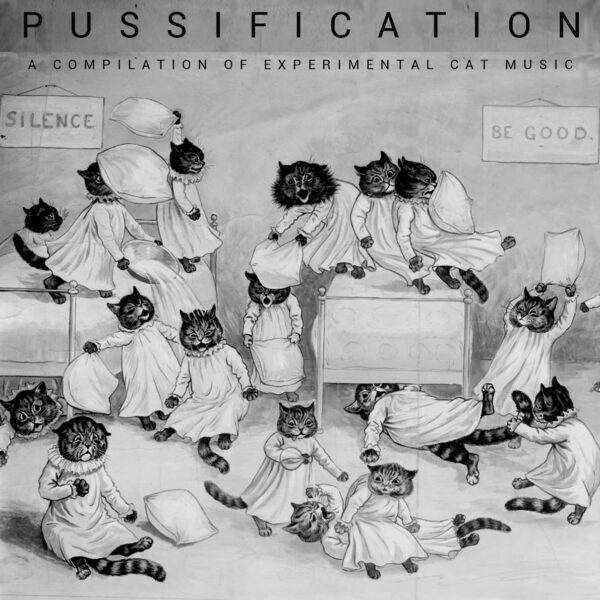 The CDR Pussification: A Compilation of Experimental Cat Music (NO NUMBER) was released on the marginal label No Part Of It, which is managed by Arvo Zylo – a fellow who makes every attempt to keep his activities as secret as possible, apart from a number of published interviews, appearances on WFMU, and an archive of radio shows (a collection which has now apparently vanished from his site). He sometimes records as Blood Rhythms, sometimes as himself, and he it was who compiled this very odd 19-track mish-mash working on the “open call” method, which I assume means that any contributor who responded to the invitation stood a chance of getting accepted onto the album, provided they adhered to the guidelines: they had to record “material featuring content by the feline variety in some way”.

Well I’m all for giving cats a voice, having been a cat lover since earliest youth, like members of my family. Matter of fact I sent a scan of the cover art of this CD to my niece, who appreciated it, but wanted to know if the track titles contained any wacky cat puns. Unfortunately, there are no such puns, and her remark made me realise this is one thing this compilation lacks – a sense of humour. The Louis Wain cover artworks might lead a listener to expect a jolly catty romp of some sort, and likewise an early cut by the irrepressible Le Scrambled Debutante, an American tape splicer who has a wicked dark sense of sardonic wit, promises plenty yoks ahead. But most of the comp is rather dreary noise, solemn, pointless, even a little futile in tone. Even when catty sounds do appear – which is not often enough for my liking – the poor beasts sound as though they’re hungry, in pain, or otherwise very discontented.

I received my copy of this from the hands of Hari Hardman, a genial English chap who used to send us quite a few of his home-made cassettes of very rough noise emitted in short bursts, and he’s on here too (with a number called ‘Cat Scratch Fever’ – which isn’t really a cat pun, but a pop culture reference to the famed album by Ted Nugent), and instead of his usual electronic howlage he gives us a perplexing and brief anecdote that could be a field recording documenting the worst ever instance of “putting the cat out for the night”. Apart from him, the only other name I recognise is Anla Courtis, who did ‘Angry Cat Choir’s Annual Meeting’. Lots of new names on here, most of which I assume are aliases, so I suppose it might be part of Arvo Zylo’s agenda to shine a light on the more obscure corners of DIY noise, which is a good thing to be doing.

However, a rather patchy set overall, a queasy mixture of extreme noise, crazy electronics, tape-collage, sampling and murky field recordings, with nothing like enough cat-related material to fulfil the quota or truly meet the promise made by the subtitle. For a much more imaginative (and uplifting) approach to using cats as the basis for sound art, may I recommend the LP The Labyrinth Scored for 11 Different Cats by Terry Fox, an art-gallery cassette from 1989 later reissued on the German label Choose Records in 2009. The artwork of Louis Wain has, of course, long ago been co-opted by Current 93. This, from 31 December 2019.