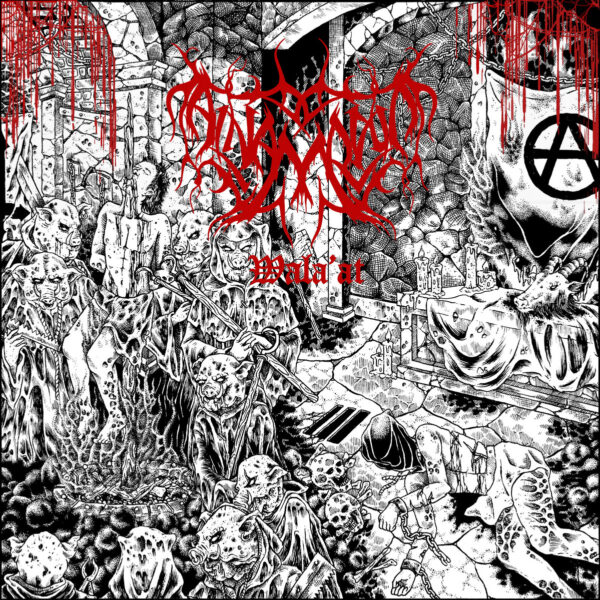 Celebrating 12 years of resistance to Saudi government authorities who would have the band members imprisoned and facing the death penalty for playing and recording music with a strong anti-Islamic bent, Saudi Arabia’s one and only BM band Al Namrood (the name refers to Nimrod, the Biblical king who challenged God) has brought out Album No 7, “Wala’at” (“Loyalties” in Arabic) in its own inimitable style, mixing black metal with Middle Eastern instruments and musical structures, and adding singer Humbaba’s theatrically vocal gymnastics, into a very punky and astonishingly alternative pop-friendly style. By necessity the album has very basic production values and accordingly the music is rough around the edges – but this becomes part of the band’s style and if anything highlights the urgency, the energy and the bizarre country the band lives in, where government authorities can decide at whim what is allowed under their interpretation of Islam (so skyscrapers and Western-style hotels can be built in the middle of Mecca while historic buildings actually associated with the Prophet Mohammed can be destroyed) and what is not allowed.

For an album made under trying conditions its sound is actually very clean which listeners will quickly notice on the instrumental introduction “Al Hirah”. From here on, the musicians launch into their familiar style of dense steely melodic BM with synth percussion (which perhaps doesn’t give the music the muscle that it needs – but fans of the music will be expecting this) and the eye-rolling singing antics. The Middle Eastern folk music elements and structures are better integrated with the BM style than on some previous Al Namrood work, and the clean delivery of the folk music contrasts strongly with the thrashier BM.

Musically the album divides into three groups of songs with tracks 2 to 4 showcasing the integration of Western BM and Middle Eastern musical elements and structures into one whole whose parts can’t be picked apart; then the more BM-sounding tracks 5 to 8 featuring a lot more energy and passion and loads of screaming, crying, gabbling and whatever else Humbaba on his own personal vocal roller-coaster ride is going through; and the remaining two tracks “Wahum Althaat” and “Alqaum” which bring back the acoustic folk instruments and musical structures with those bewitching quarter-tones and the sinuous melodies. On these last couple of songs the music can be very lush and layered and achieves a very surreal and epic cinematic quality.

When all is over and done with, listeners can feel exhausted from being king-hit with so much densely layered music, with all its contrasts and the epic scale it has reached – but pretty likely they’ll be reaching for the repeat button as the energy and enthusiasm coming out of the record are so infectious, they’re virtually addictive. If there is a criticism to be made, perhaps it is that the album sounds a bit too Western and not Middle Eastern enough, though the folk rhythms are present throughout the whole release. This means though that the album is Al Namrood’s most accessible for an audience beyond Saudi Arabia, and anyone interested in investigating Middle Eastern BM bands and wanting to know where to start should certainly start here.