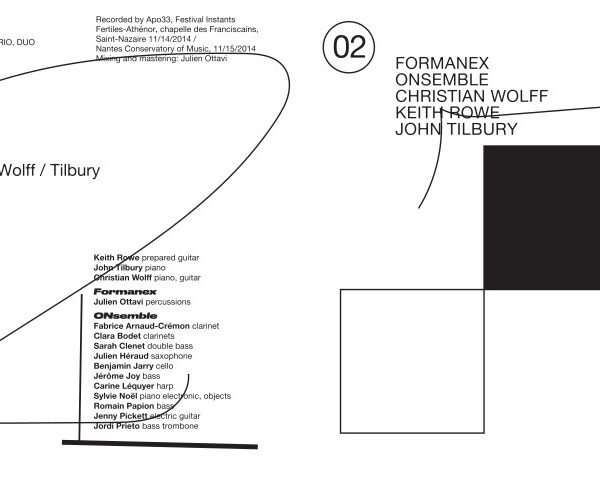 Second instalment of our Formanex box set review. On discs two and three (MIKROTON CD 77 – 78), our French friends tackle the works of composer Christian Wolff, doing so with the help of members of AMM and ONsemble – and Wolff himself. Seven Wolff works are covered across the range of these two discs, recorded in 2014. At this point I have to own up to a gap in my musical education and admit I never heard Wolff’s music before; well, almost never, as I find there’s an early Wolff work on the David Tudor box set I own. A crash course on the story of this French-born, American-dwelling composer reveals a number of interesting connections that clearly make his work important to Formanex. Firstly, Wolff explored ways of incorporating improvisation into his compositions; secondly, he used unusual notation to do it; thirdly, there’s the Cardew connection (see Disc 1 and Treatise). Seems that Cornelius Cardew, and Frederic Rzewski, helped Wolff along these challenging pathways in the 1960s, as they found common ground among their own respective projects. Likewise with a general move in the 1970s towards explicit political content in their work, but that’s another story. Wolff has also been labelled as one of the “New York School”, perhaps through his association with Tudor, Feldman, and Earle Brown; he did study under John Cage, but only briefly, and used indeterminacy early on to make his “open” scores. He had more of a productive spell scoring music for Merce Cunningham’s dance troupe.

I spin ‘Two Pianos’ and find this a fascinating, enigmatic monkey-puzzle of a piece. John Tilbury has played Wolff in his career, though perhaps not as often as he recorded Feldman. Odd details here include audible creaking of piano lid, and snatches of birdsong, incorporated in the piece; I’m unable to follow the musical language here, as the piano phrases seem somehow incomplete to me; over 20 mins, the gaps become bewildering. On ‘Edges’, I’m on safer ground as it’s an ensemble thing, and something that can more or less be aligned with much recent minimal improv and EAI. Even so, quite unlike the strange map of ‘Treatise’ it be. I feel as if there are at least two opposing camps on stage, there’s that much tension between them. It’s not that they squabble over which direction to take, but they’re sulking and brooding and scowling at each other. It’s not a simple electronic versus acoustic instruments split (though that’s here too). ‘Edges’ was composed in 1968; a semi-graphical score, lots of prose instruction, no specified instruments, and whatever musical notation there might be is pretty reduced. I’m beginning to see how this combination whets the Formanex appetite.

Closing disc two doesn’t even feature Formanex at all, but instead a trio piece played by Keith Rowe and Tilbury from AMM, with Wolff himself. I hadn’t appreciated Wolff was an improviser too, but I’m late to the party. I see he played with AMM in 2009, joining Tilbury and Prevost and star guests, in a performance that was released as Sounding Music on the Matchless label. This trio is a real menacing growler. The stark silences and tensions are pretty hard to take, even though the pace is slow and the progress is glacial. Mostly rather odd and unnatural sounds emanate from this brittle encounter, though one can detect piano notes (possibly prepared), Rowe’s radio in brief snatches, horrible deep growls and scrapes from his tabletop guitar, maybe. 16:49 of solid music broccoli here, by which I mean it’s loaded with vitamins and minerals.

On CD 3, we’ve got the composition ‘For 1, 2, 3 People’, originally written in 1964. Another “open” score which is designed to be open to interpretation by the players, doesn’t specify instruments, and encourages collaboration. I’m still baffled by the music language, but I like the “shapes” being formed, if one can call them that; each note is well-formed and highly distinct, and when they combine, it’s restrained and highly effective. One of those pieces which I regard as the equivalent of a Quaker meeting; people only speak when they have something worth saying, and remain in silence otherwise. ‘Looking North’ is one of the pieces drawn from Wolff’s Prose Collection, where the aim is simply to get the players to “synchronise their actions” with the others on the stage. This is evidently a larger group piece and I suppose Formanex and ONsemble rolled up their sleeves on this occasion, to produce 10:22 of sighing and groaning in a huge, sympathetic, soggy drone of elephants breathing. Fab!

Another recording of ‘Edges’ follows, again an ensemble piece. If I thought the first slice was an episode of hateful brooding, by now the detente has failed and we’re on the verge of seeing the United Nations breaking up into many factions. I’m sure I’m not supposed to be hearing any conflict in this lovely collaborative music, but this ‘Edges’ version has many dark moments and unresolved anxieties in its teeming fabric. Useless to try and analyse the instrumentation here; the surfaces are prickly, or grumbly, or both. Good that we can hear the same score twice over, interpreted in such markedly different ways; this is one of the aims of the Wolff plan, I gather. Lastly here we have another Wolff-Tilbury-Rowe trio piece, wholly improvised I must assume. Where the one on CD2 was somewhat subdued and cryptic, the threesome are acting much more outspoken here, forming longer phrases of musical expression and making bolder, gestural noises; a lot of the things I have associated with AMM over the years. Impressively, it’s not like any AMM record at all, and having Wolff at the centre of gravity evidently enables those two heavyweights Rowe and Tilbury to explore different avenues and flex other muscles. With that many mixed metaphors in one sentence, it’s time for me to quit typing today. Released in October 2019.