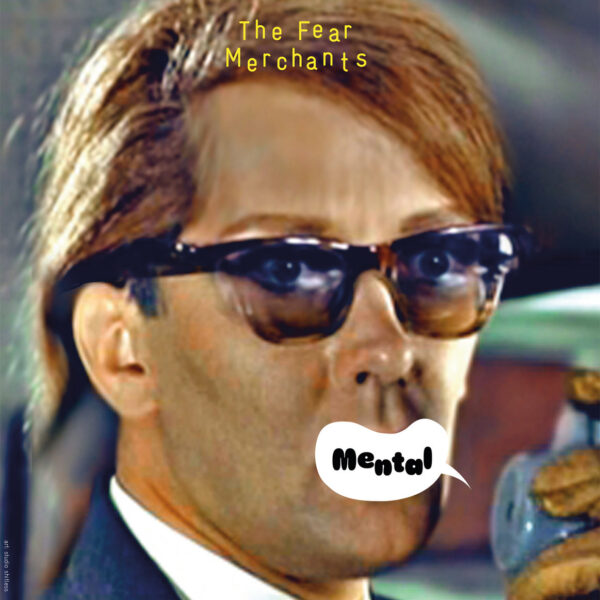 Received a couple of new releases on vinyl from Jim Xentos…this singular English creator was a member of The Homosexuals from the late 1970s, a very odd band emerging from a squat “scene” and somehow managing to slip their subversive work under the radar within the catch-all genre of “post-punk” music. Jim then later released even stranger records on the underground label It’s War Boys, many of them on now impossible-to-find cassette tapes and vinyl singles, and released under a baffling series of alias names. Some of these bizarre items are coming to light in the form of CD and vinyl reissues over the years, but the jigsaw will never come together completely. Also don’t forget Jim’s on-off working relationship with Lepke Buchvalter, most notably on the Milk From Cheltenham album in 1983 and (less rewardingly) as the awful, obnoxious synth and vocal duo Die, Trip Computer, Die. At all times, Jim Xentos has not only produced astounding and bold experimental music that takes incredible liberties with pop song, dub mixing, rock and easy listening forms, but he’s also managed to keep his secret identity very well hidden, not just through cloaking his name under several aliases, but also deliberately passing out misinformation with the subtle skill of a US presidential aide. Indeed, he makes use of one of the techniques of doing this, i.e. mixing up real facts with outright lies, often in the same sentence or paragraph, which brilliantly confuses the reader until we don’t know what might be real any more. In a more sinister context, I need hardly tell you how well this method – sometimes called “gaslighting” – has worked for the UK government in 2019.

The first item spun within these walls was Mental (EMOTIONAL RESPONSE ER84) by The Fear Merchants, and after less than 24 hours I’m still left slightly unhinged by this weirdie, one of the more bonkers releases in the highly-eccentric Xentos catalogue. It originally came out on cassette in 1983 on the It’s War Boys label, features vocals from early collaborator Sara (from Amos and Sara) and some accordion work from Ian Hill, but I think we can assume it’s mostly a product of the demented mind of Xentos. He describes it as “an operetta with an affectionately tasteless theme”; as far as I can make out, there is a story of some sort being told, concerning the admission of a mental patient to a hospital wing under the care of a psychiatrist who speaks with an exaggerated German accent. Right away we’ve got a potentially hackneyed scenario peopled with caricature characters, yet the record instantly starts to undermine these stereotypes. In the opening grooves of the LP, it’s disclosed that the patient has a multiple-personality disorder, claiming seven distinct people inhabit their body. 1

The remainder of the LP then devotes a song to each of these characters, and the episodes are linked with spoken-word interludes from the German doctor, who’s clearly as fractured as the rest of the characters in this unsettling narrative. Good luck trying to make any sense of the songs, even though the libretto is included with the record; Jim sings every voice in a heavily-disguised “funny” manner, as if wearing the audio equivalent of false moustaches and fake noses, and you can barely make out a single word. If you were hoping for a resolution to this clinical nightmare of a story, forget it. So far we have a confusing radiophonic narrative and indigestible songs, high on the irritation factor – some of the repeated “chorus” hooks will make you want to vomit. It’s the Goon Show on acid…Jim’s gift for zany voice personas is evidence of a remarkable talent in this area, and makes one think he could easily have been a mimic or voice actor in another life, but he directs that talent towards alienating the listener and presenting a hideously scrambled view of the world. Mental illness is a touchy subject to explore at the best of times, but The Fear Merchants don’t care; no taboo is too extreme, and no target safe from this subversive stream of barbs.

The insert includes old black-and-white photos from a hospital showing surgeons and nurses around a patient on the table, images which are charged with a nightmarish aura, and which reminded me of the Tolvek LP by Micro_Penis – a record which is not too far apart from this one, in terms of its questionable taste and completely absurdist take on reality. I should also mention the musical arrangement, which is among the most inventive I’ve heard from any Xentos project; the backdrops have a simplicity and elliptical genius that is jaw-dropping, full of unexpected dynamic drop-outs and twists and turns. Shame that you are barely given the space to appreciate the craft of this musical production, as the surface of the record is strewn with these deliberately uglified vocal concoctions. Note also the disquieting cover image, and the ingenious trick of using mirror-writing for the track titles on the back cover. Limited edition and pressed in coloured vinyl too; the label is American, founded by members of Boyracer, and this came out in October 2019. 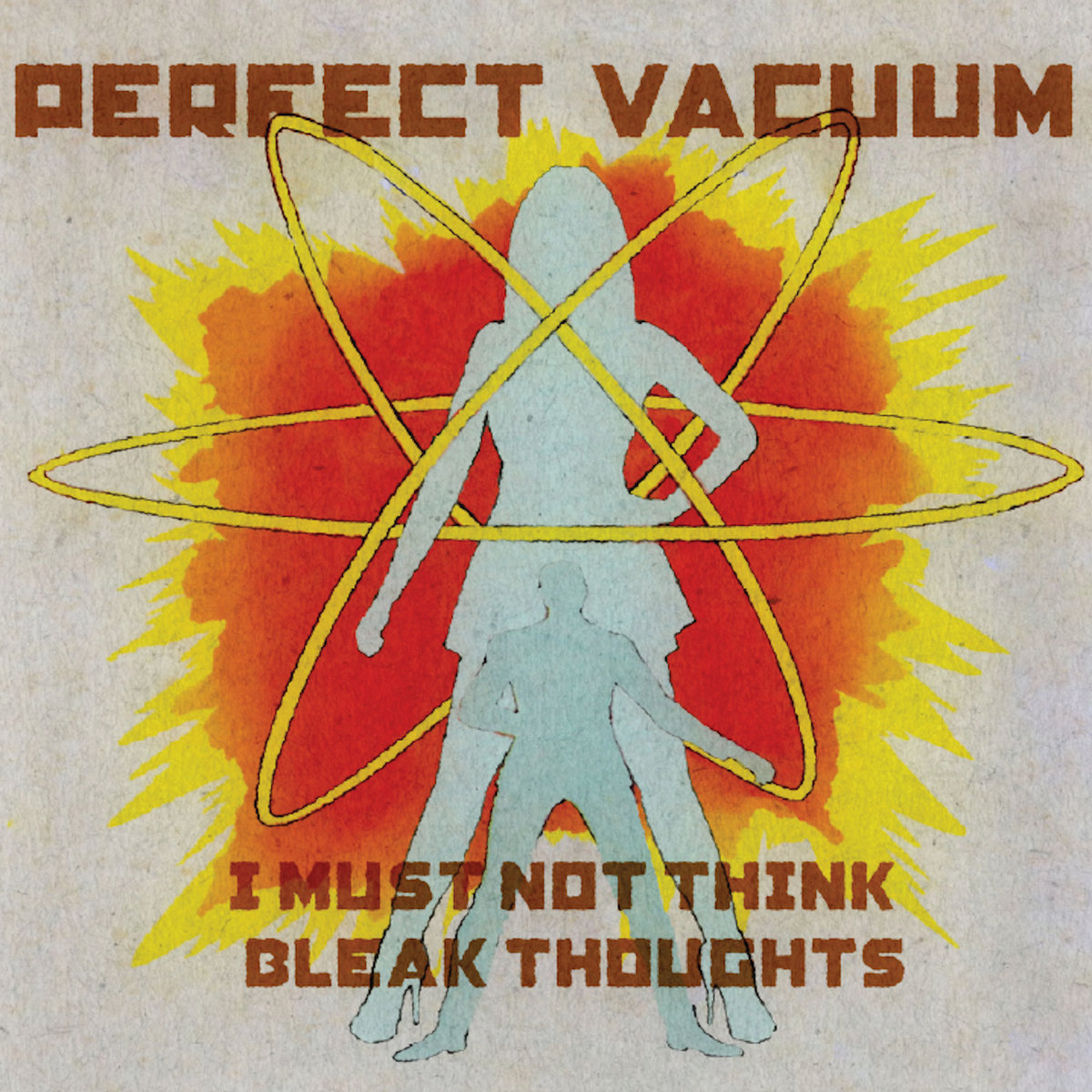 I may not have sold you on the prospect of hearing Mental, and if not you might find the second item by Perfect Vacuum more approachable. I Must Not Think Bleak Thoughts (BLOWPIPE BP125) is on the Dutch blowpipe label and distributed by the Worm cartel; the band Perfect Vacuum is mostly the core duo of Jim Xentos, appearing here as singer Dave Marsh, along with the Netherlands all-rounder Lukas Simonis, a man without whom the Rotterdam improvisation scene (and indeed the whole of Europe) would be a poorer place. A number of collaborators are also credited on the back cover, but given their outlandish names – Trend Watkiss and Nazmiya Ibrahim – it’s tempting to think these are further aliases and false identities to throw us off the scent, or included just for the fun of it. They also play a number of instruments with technical-sounding names that are hard to believe, and these ringers are scattered in a list which contains some real instruments (see gaslighting technique, above).

“Our original idea was to fashion an entirely synthetic album,” reports Jim, and listeners who enjoy a well-arranged layering of synth lines will find this release an attractive proposition. Whether it’s the presence of Simonis, or whether Jim is getting more altruistic these days, the whole of Bleak Thoughts is much more accessible than any given It’s War Boys item, and although you shouldn’t expect simple melodies or a conventional pop-music production sheen, the chances are you will find this a very enjoyable spin. Even so, Jim cannot help pushing at the limits of song form, and there are plenty of surprises to be unwrapped hidden across these eleven ditties. The Mental record showcases his penchant for zany voice stylings; this LP shows what a great singer he can be, when he wants to.

Perfect Vacuum appear to have made one other record, the 2009 CD A Guide To The Music Of The 21th Century which I never heard, but I see the sleeve is a very disrespectful pastiche of the numerous Switched-On Bach records that CBS put out in the late 1960s when the sound of the Moog was evidently perceived as having a novelty value. Having declared their intention to make an all-synth record, the duo apparently compromised on the purity of this ideal as the production proceeded, and I think we can hear some guitars on the record and possibly other “real” instruments too. The witty debunking of this lapse in style, if we can call it that, is covered by the reference on the back cover to “the advanced additive technique of The Combinex”. There is, I suppose, no such device as The Combinex available to a studio technician, but wait and see; we all know the story about John Lennon and the “flange”, even if it isn’t really true.