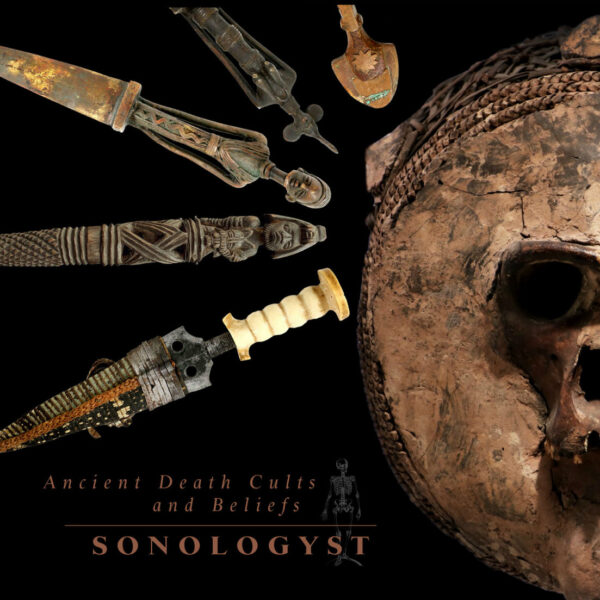 In pursuing an alternative dark universe of sound and possibly even music that exists in parallel with ours, and which for divers reasons – political, ideological, psychological, even spiritual – we prefer to shun and deny, Italian sound artist Sonologyst (the solo project of Raffaele Pezzella) turns his attention to the rituals of cultures past and present around the world in venerating their dead. In most cultures outside the West and its institutions and influences, the dead have inspired awe and fear among the living, and these emotions in their turn have frequently inspired elaborate rituals and ceremonies, often necessitating the construction of temples and monuments that have to be maintained by a group or even a class of people who have to be released from daily routines of life and making a living, and who might therefore be supported by the rest of society if they are to carry out the rituals of worshipping and appeasing the dead. From these people, a priesthood might arise, with all the consequences of their presumptions of superiority over everyone else in society or on the contrary their complete debasement, being shunned by everyone, until perhaps some time when the external conditions of society change, they rebel against their oppressors and perhaps install themselves as a new elite.

On this album, Sonologyst travels to Ancient Egypt and the Mexico of the pre-Columbian Mayas among other cultures whose religions, having grown from nature and ancestor worship, honoured the dead with various rituals, traditions and customs including mummification of their bodies (and sometimes even their pets), burying them with all their furniture and other accessories of their former lives in mausoleum structures and pyramids, regular periods of appeasement or supplication, and sometimes even ritual cannibalism in which a body part of the dead person would be eaten so as to gain some of that person’s essence that made him / her a significant person (leader, warrior, shaman, doctor, farmer perhaps) in life. For the most part the five tracks offer minimal soundscapes of deep cavernous atmospheres and dark spaces from which mostly quiet sounds emerge slowly and gradually. Weird and sometimes creepy sounds, sighs, echoes, tone wash, bassy drones and the occasional spooky owl cry assail your ears on “Purgatorium” but these have the air of being of natural or organic origins. On “Ceremony”, the strange sounds have man-made, even industrial origins as droning voice chants and machine rhythms together conjure a secret ritual performance. In “Primeval Science”, something of the beginnings of knowledge acquisition leading to the development of culture might be implied in the percussion and wooden drum loops and the shrill overarching drones and guest musician Paulo Chagas’ soprano saxophone that swoop overhead.

The major track through sheer length alone is “Anubis, House of dead prince” with Chagas guesting on bass clarinet and Dadang Dwi Septiyan on percussion. This is the most complex piece of music with musicians and instruments from very different music and cultural traditions playing together to create a rich and sonorous texture over a constant spinning or grinding sound layer. The whole work certainly seems very monumental, even though the sounds are very sparse, and the listener instantly feels in awe though the mood is never sinister and in fact seems quite benevolent. Listening to this track, I really do feel as if I’m observing the development of a unique, long-gone civilisation from its nature-based beginnings to its climax as a perhaps over-sophisticated culture burdened by too many layers of accumulated traditions and rituals whose raison d’etre has long been forgotten even by the centuries-old priesthood elites and their secret societies.

Listeners might not learn much about particular death cults – anyone interested in the cult of the Indian death goddess Kali and her Thuggee followers will have to go elsewhere – but this album certainly has some very intriguing soundscapes that feature deeply primeval sounds and sound textures amid vast depths of silence and space. It would be suitable as a background soundtrack for deep meditation if listeners were that way inclined.