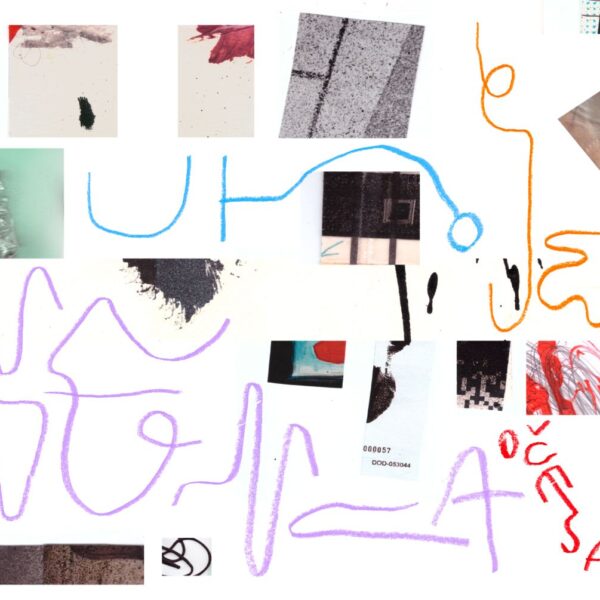 Another record from the Slovenian Zavod Sploh label…the previous one from November 2019 by Irena Z. Tomažin was a slow-burner for me, although now I defend it against all comers on a daily basis. Today’s item is titled Uho Je Senca Ocesa, translated into English as The Ear Is The Shadow Of The Eye (ZAVOD SPLOH ZASCD 020), it’s credited to drummer Zlatko Kau?i? and bass player Tomaž Grom, and a very compelling set of improvised music it do be. There probably aren’t that many free improv records made using just drum and bass, and the label claims that “this is one of the few recorded double bass and percussion duos of improvised music in the world”.

Tomaž Grom also happens to run this label in Ljubljana, but Zavod Sploh is in fact an entire association for music production and performing arts in this part of the world; as to his own musical development, Grom has cultivated his extended techniques and sometimes plays the bass with added electronics (not here; this one is all acoustic). Zlatko Kau?i? is a veteran of jazz and improvisation in his homeland, working for over forty years at time of writing, and is a member of a number of small groups and orchestras. Like Eddie Prevost, also a drummer of course, Kau?i? has run his own school for young musicians, an enterprise which has evidently met with great success. They’ve been playing together as a duo for nearly 25 years now, but I think this might be the first record they’ve released. I think the triumph of this pair is that they’ve managed to create something that’s highly innovative and surprising, even to those listeners and friends of long-standing (including Luka T. Zagoricnik, who wrote the insightful essay) who think they know everything about their music.

That alone would be reckoned an achievement, but to a listener like me the music is completely fresh and new; a number of things I like about it…concision, not too many long takes; economy in the playing, meaning a lot of information is transmitted without going into long-winded detail. A certain urgency in the playing, without being drawn into an overly frantic style of playing; both sound assured and fully confident of what they’re doing. A brittle and spartan sound (which is one net result of working with these instruments), yet they find exciting ways to bring new voices to bass and percussion, without resorting to tiresome gimmicks like “preparations”, electronic effects, or bowing everything that stands still long enough to feel the hairs of the bow. Strong, concentrated stuff; recommended. From 20th January 2020.