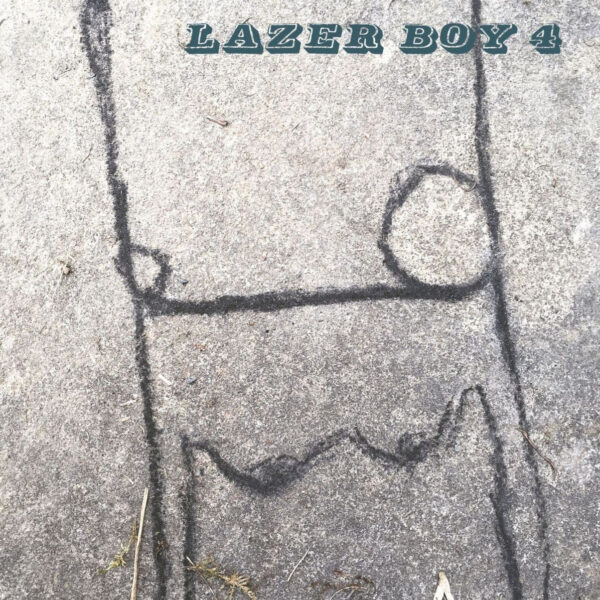 Got a mini-album of sorts from Lazer Boy, released on the Leeds label Vanity Case…the members have connections to Geese, 3eese, and Frozen Geese and The Congregation, all of whom have been released on this label also. All have been pretty consistent musically and not without flashes of brilliance, and I have fond memories of the 2010 Frozen Geese cassette called The Starseed, a real rocket-ship ride of psychedelic blowing.

Today’s record Lazer Boy 4 (VANITY CASE VC 23) was made by the duo of David Lazonby and Stephen Goodwin with guest appearances from Mick Dale and Chris Graham, and comprises a mix of songs, spoken word, and instrumentals, recorded with a nice rough DIY production edge that is enormously endearing and warm. I liked the instrumentals ‘We Will Rise Up On The Wind’ and ‘A Thousand Kim’, which feed psychedelic rock and Krautrock styles through a particularly English post-punk styled mincer and turn out perfect meat products for the butcher, all the more impressive for keeping what could have turned into a 20-minute jam of needlessly self-indulgent windbaggery within the four-minute mark. On the other hand, there’s always the 16:43 track ‘319-392’, an epic of Pink Floyd head-duggery that is so ambitious it’s structured in five subtitled chapters. But it remains endearing and charming, with an unassuming home-made organ drone, quasi-cosmic cymbal crashing, space cadet bass riffs, phasing, wah-wah guitar and half-formed song elements, that sort of thing.

Lazer Boy (like many Lazonby related bands) may not be 100% inventive every moment nor especially avant, but they have a high level of facility with playing their instruments and making records such that they make it seem both easy and natural, something a lot of players should envy. Nice. From 23rd January 2020.