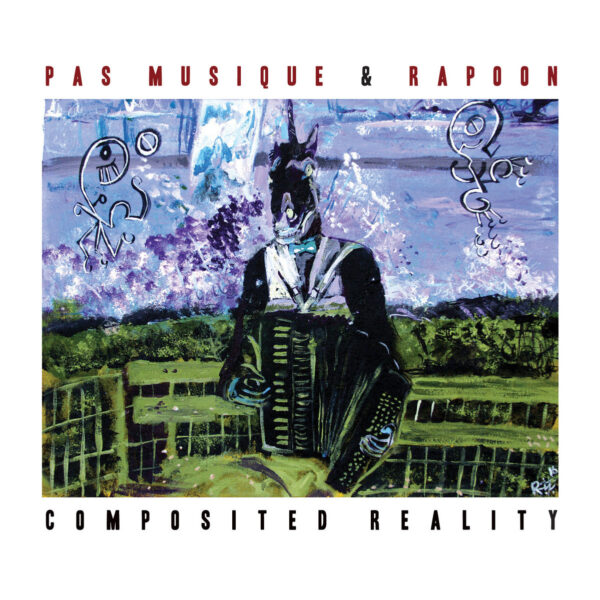 We used to receive regular emissions from PAS Musique, that New York entity which I suspect is largely the work of the main man Robert L. Pepper, although numerous collaborating musicians often appear. Seems the last item to have landed here was Inside The Spectrum from 2015. What we have today is a team-up with Rapoon, i.e. Robin Storey from Newcastle whose 1990s work I will always welcome with a soft weathervane as he sings his tales of the sea and the storms. Composited Reality (ZOHARUM ZOHAR 192-2) is a single live performance lasting 52:41, recorded in New York in 2017 and originally issued by Alrealon Musique as a cassette, various streamable formats, and a memory stick. Polish label Zoharum have reissued it after only one year, but then they are evidently very keen on sustaining the catalogue of Rapoon with reissues and new releases. Of the former, one notable goodly item was Darker By Light which I likened to an intrepid exploration of unknown jungly turf.

Composited Reality is a real fug of sound – PAS Musique have usually come across to me as reprocessing types who don’t know when to quit, and aren’t happy unless they have 18 spinning separate layers to deal with. Plus they like to mutate and distort everything until it sounds like melted goo on a hot stove. Some of that technique can be pulled out of today’s pizza toppings, but the general full-on murk of unreal shape-shifting proportions is underpinned with rhythms and looping elements which lend it a rather compelling ebb and flow. If there’s an ethnic vibe to the sounds, the rhythms, or even just the atmosphere of this highly charged whirl-a-roo, than I would ascribe these portions of the canvas to Storey whose interest in exotic and non-Western music is, I think, fairly well understood…there’s also plenty of interesting field recordings, some from Indonesia and some captured at home in NY and Newcastle. All of these competing ingredients are given requisite sizzle and burn in a large cauldron, with tangible results. Given my disenchantment with the records Rhiz and My Life As A Ghost, this niftoid goes some way to redressing the eucalyptus tree.