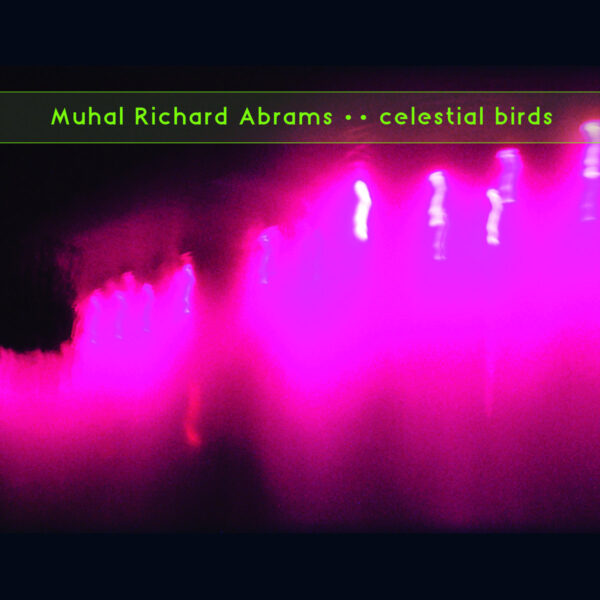 Celestial Birds (KARLRECORDS KR070) is a compilation album intended to showcase the experimental electronic-based compositions of Muhal Richard Abrams, famed jazz musician and founding member of the AACM. All of this music has been a revelation to me and somewhat hidden in terms of its availability, or perhaps overlooked in general discussions of free jazz and Afro-American music. The LP was curated by Reinhold Friedl, of all people, the fellow who has realised so many astonishing musical projects through his super-powered Zeitkratzer Ensemble.

The album’s A side contains a single side-long tour de force called ‘The Bird Song’, originally issued on the Delmark LP Levels and Degrees of Light in 1968; an impressive piece, which starts out with a poetry recit and builds up to become an impressive piece of “energy” free jazz, performed by notable players Anthony Braxton and Leroy Jenkins, plus Leonard Jones, Thurman Baker and Abrams, with Maurice McIntrye on tenor sax. Actually the electronic aspect of this one is a bit hard to discern, unless one counts the noticeable studio echo which casts the entire performance in a rather surreal and lurid light. However, it’s certainly bold and innovative in form, with the portentous poem part performed by David Moore (aka Amos Mor, a Chicago poet who had some influence on Amira Baraka). Moore’s poem holds many avian symbols, and while its point may be a little obscure it would be tempting to think its subtext expresses a desire for emancipation; after all, 1968 also saw the release of ‘Blackbird’ by Paul McCartney, which some have interpreted as a veiled commentary on civil rights. I will also note the presence of Braxton here, who is of course no stranger to experimentation within the jazz envelope, with his understanding of Stockhausen, his use of electronics, his complex semi-conducted improvisations, his graphical scores. For me personally, Leroy Jenkins is a major highlight on this recording, producing a section of eerie tones and fevered playing with his violin that, treated with the echo, produces remarkable sensations.

One Side B, we jump ahead to 1989, with a solo Abrams cut from his LP The Hearinga Suite originally released in Italy on Black Saint. It’s piano and synth, but mostly piano; a righteous piece of introspection and brilliant chords to be sure. The synth interjections appear for the last two minutes, and sound to me like synclavier presets of bells and bamboo flutes, Abrams using them like he would a paintbox. Then there’s ‘Think All, Focus One’ from 1995; that title resembles a Sun Ra title, and reminds us how, by this date, Ra had already been much wilder and daring with his Moog experiments (his Oblique Parallax dates from late 1980). While I found the surface sounds unappealing (a nasty kind of funky clavinet setting with other overlays), the intricate construction is complex and fast-moving. I’m finding more to enjoy in the eight-minute ‘Spihumonesty’, which comes from a 1980 LP of the same name, also on Black Saint. I never heard it, but the album contains titles such as ‘Triverse’ and ‘Inneroutersight’, again indicating touches of Sun Ra cosmo-sun connections. Of the four cuts on this album, this one is the most “electronic” if we’re keeping score: two synths, one theremin, an electric piano and an organ, and the form is about as far away from free jazz convention as you could get. Having George Lewis on board, the trombonist and electronic wiz who made a connection with Evan Parker and Company, is undoubtedly one major force in the direction taken by this spooky moaneroo. Youseff Yansy plays the theremin on this cut, and he appeared on the 1978 Apple Cores album with Sunny Murray. It’s good to hear the organ and e-piano – here played by Amina Claudine Myers – doing something that doesn’t feel it has to copy from 1970s Miles Davis records, and Myer’s work contributes considerable tension to this open-ended composition.

The press notes indicate there’s an entire essay of commentary waiting to be written about Abrams’ bold decision to embrace electronic music. To put it in context, there were two main blockers: firstly, the instruments and the technical skillsets required to compose “serious” electronic music were reserved for universities and institutions such as IRCAM, co-opted by classical musicians, and culturally located in such a way that access to black musicians was not exactly encouraged. Secondly, there were reservations among free jazzers too, some of whom may have regarded electronic instruments with suspicion. According to George Lewis, it’s an authenticity thing; free jazz, played on acoustic instruments, had evolved into an important voice for the Afro-American, and one suspects it was perceived as a hard-won battle. Lewis has expounded this argument in detail in a book called A Power Stranger Than Itself, so perhaps that essay has already been written. A strong selection of pieces here, even if it is a bit uneven as a listen, and doesn’t quite meet its own agenda. Even so, fans of jazz who want to expand their understanding of the AACM and the Chicago school should clasp it to their hearts. From 31st January 2020.