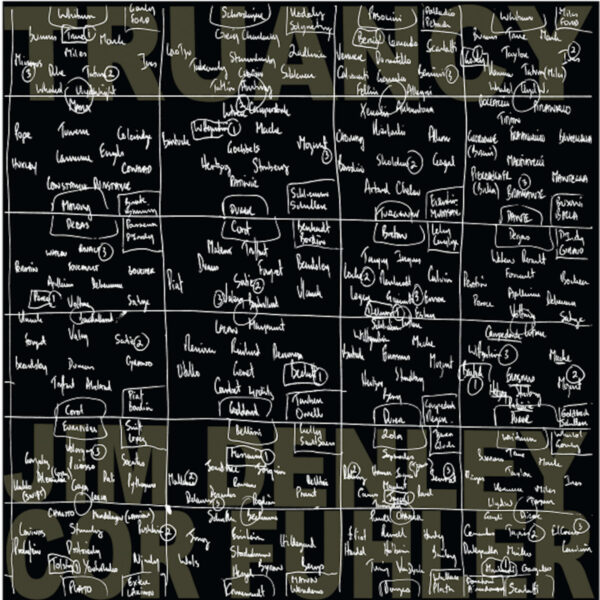 News of Cor Fuhler’s death on 22 July 2020 at age 56 years after a long illness (not COVID-19, by the way) hit me hard even though I’m not that familiar with his work and the only significant release I remember having of his was his collaboration with Gert-Jan Prins, “The Flirts”, recorded nearly 20 years ago. Born in the Netherlands in 1964, Fuhler studied improv under Ukrainian-born Dutch jazz pianist / composer Misha Mengelberg and became an improviser / composer on treated piano, guitar, synthesiser and various other instruments. In the early 1990s, Fuhler met Australian improviser / composer / saxophonist Jim Denley in Switzerland and over the years they met occasionally to play together whenever Fuhler came to Australia. In 2012, Fuhler moved to Sydney and this afforded more opportunities for the two to perform as a duo.

Denley and Fuhler recorded “Truancy” over the last seven weeks of 2013 in the latter’s backyard studio in Wahroonga, in northern Sydney. For the first 10 minutes of first track “Skive”, the duet of acoustic alto saxophone and acoustic piano is rather low-key and restrained, despite the early skittery noise, but later on the track the saxophone perks up and starts parping out blats and bursts of tone drone. The treatments of both sax and piano render those instruments unrecognisable to listeners and at times telling the difference between the two is hard indeed. You would be hard pressed to believe that the two musicians are not using non-keyboard percussion instruments at all, as sounds reminiscent of bells, gongs and even maracas appear on the recording. Second track “Wag” is a livelier if more shrill work, with occasional moments of darkly sharp, even steely menace. Ear-splitting drones with insistent tinny alarm-clock beats make the early part of “Wag” hard to ignore and paranoia surrounds the listener completely. Splurts of more or less pure sax appear near the end of the track, as if the instrument is now admitting its true identity.

Even though for the most part the album coasts along on an even keel, seemingly more absorbed in the new world opened up by prepared sax and piano than in manipulating listeners’ minds and feelings, the treated yet raw sounds and tones the two musicians coax out of their instruments can be truly astonishing and original. The piano and the sax really do take on other musical identities under Denley and Fuhler’s hands. Once again, and not for the first time or the last, a significant voice in music becomes much more so to us when we discover its loss, and what remains of that voice is remarkable recordings like “Truancy”.