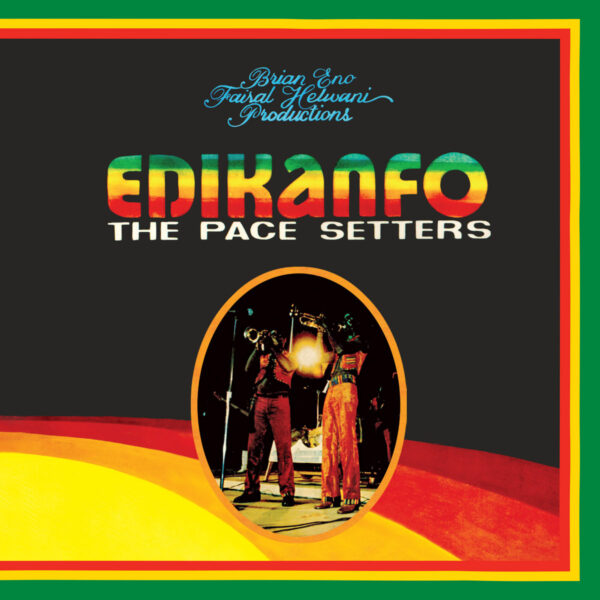 Originally released in 1981 by EG Records, this debut album by Ghanaian band Edikanfo (whose name in English is also the album title) proved successful commercially and generated public interest not only in the band but in the Ghanaian highlife scene where Edikanfo’s music is grounded. For a short time, the musicians in Edikanfo were sitting on top of the world, not least because the engineer and producer of their debut was famous ambient music maker Brian Eno who’d come to Ghana at the invitation of business entrepreneur / Edikanfo’s manager Faisal Helwani who had formed the band and was based at The Napoleon Club in Osu, a suburb of Accra. Unfortunately on the last day of 1981, military leader Jerry John Rawlings ousted the government in a coup, and for years afterwards Ghana’s live music scene, affected by nightly curfews, declined. Because of this, Edikanfo was cut off from the outside world and financial hardships and Ghana’s unstable politics forced the band to break up and its members went into exile across the world. Only recently have surviving band members, among them bandleader Gilbert Amartey Amar, have been able to come back together in Accra to form Edikanfo anew and to reissue and tour their album.

Eno’s contribution is a crisp production that captures the music’s lively sparkle and energy; apart from that, he leaves the band to do their Ghanaian highlife / Afro-funk / disco / jazz thang. First track “Nka Bom” has a strong 1970s blaxploitation movie soundtrack feel with the blaring trumpets, the choppy staccato melodies they sometimes use, the little organ break-outs and the urgent, insistent rhythms. “Something Lefeh-O” is a joyful, bouncy song with call-and-response type singing and buoyant horns, bass guitar and occasional effects. Each song has a different style and mood, probably because each was composed by a different member in the band; this of course means the album sounds more like a compilation than a group recording. “Gbenta” feels more funky and jazzy with a mood that seems more serious if no less joyous than the preceding song, and features some very impressive percussion / bass jamming.

The tracks that follow aren’t quite so lively and have somewhat less originality and individuality. “Blinking Eyes” seems like generic instrumental jazz rock / pop and “Moonlight Africa” seems like a compromise between some choral singing experimentation and more 70s-style instrumental jazz rock / pop noodling. “Daa Daa Edikanfo” brings back some of the earlier energy but this song and the other two tracks in this second half of the album lack the inspired, almost feverish jamming and the distinct moods of the album’s earlier half.

Never mind that the second half of the album doesn’t quite match the earlier half for energy, excitement and distinct musical identities and styles: all the way through the musicians play enthusiastically and really put their hearts and souls into this recording. When they hit their mark, the music can be great. Even when noodling down a path they should have avoided, they have a light touch and the music is still vibrant. Where the band might have gone to after this debut, had Rawlings not overthrown the government, I find hard to say given the album’s inconsistency but now that the remaining musicians have banded together again, we can all hope they can recover some if not all of the pioneering spirit that animates songs like “Nka Bom” and “Gbenta”.