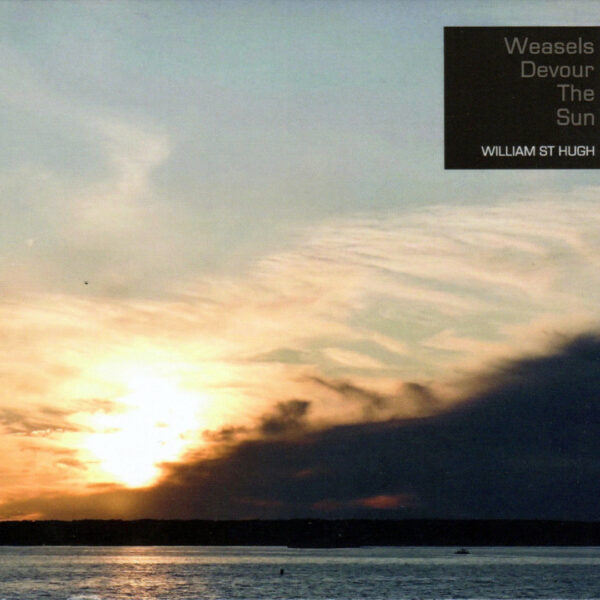 American musician William St Hugh from Fairhaven MA sent us his third album Weasels Devour The Sun (NO LABEL), which is a follow-up to his previous outings Saturnus and The Luciferian. I find St Hugh is described as both “classical” and “dark ambient” by those who seek out a genre, and indeed he himself claims to draw influence from glitch artists like Hecker as well as John Cage. I’d like to find out more, but his Bandcamp page doesn’t appear to be operational, despite showing up in a search.

Quiet, slow, unhurried; Weasels is a pretty understated spin for the most part, but there might be all manner of grim giants and unspeakable forces lurking at the fundament of these glacial drones and half-formed melodies. I’m prepared to admit the possibility of a classical-ish component, since St Hugh does concern himself with form and composition moreso than the average dark droner who leans too much on presets, process, and effects pedals. He’s also not averse to a hint of cinematic narrative; the track titles, 11 in all, allude to much grandeur and mystery in their non-specific way, and an album containing names like ‘Forged Machine’ and ‘Future Alchemist’ feels like it should be the soundtrack to an interactive CD-ROM maze game from the 1990s. However, I suspect he doesn’t invoke alchemy carelessly; he may be thinking of the famed image of the Green Lion Devouring The Sun, from the Rosarium Philosophorum.

From the ‘Charnel Grounds’ to the ‘Forgotten Way’ we acolytes must march; and with each imaginary vista he spins, the composer invites our awed response. Even so, I’m left unsatisfied; St Hugh’s rigid poise is admirable, but his music isn’t as adventurous as it could be, and you wish once or twice the guru would descend from his pinnacle and speak to us commoners in a tongue we can grasp, or at least try and show a little emotion. Despite the general promise of imminent doom, the music isn’t as menacing as even the most commonplace offering from the realms of Dungeon Black Metal or Cold Black Metal. However, it may be that the subtleties and delicate shadings of Weasels Devour The Sun will win me over in the end. From 5th February 2020.