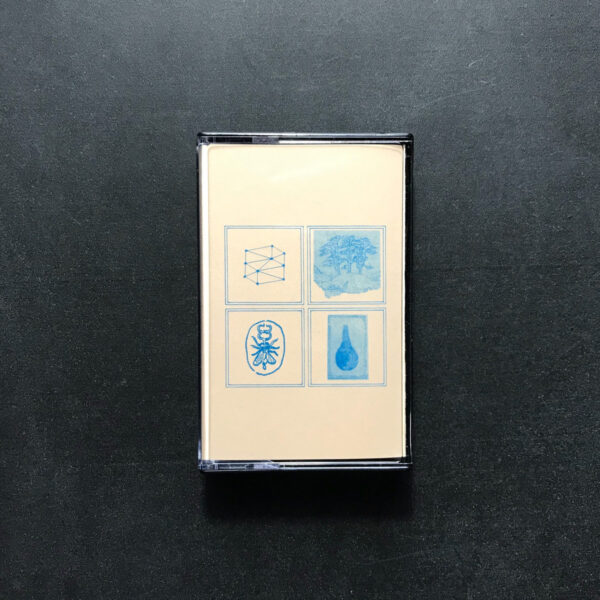 Latest cassette from the excellent US label Pilgrim Talk. Their catalogue is select, small and beautiful. While some recent items have showcased label owner Nick Hoffman’s interest in early and baroque music, the label is also a good home to contemporary minimalism, as demonstrated by the 2018 release Pieza Para Guitarra Afinada by the composer and guitarist Cristian Alvear.

Today we have another composer and guitarist, the redoubtable Clara de Asís, with her cassette Sans Nom Ni Forme (PILGRIM TALK PT39). New to me (as are so many things), this lady comes from Spain but it based in France just now, hence her cryptical album title in French which sounds like it should have come from the mouth of Derrida or Jean-Paul Sartre, and could be used to attempt a discussion of something so nebulous that it has “neither a name nor a form”. On the tape, four pieces of guitar and percussion music that are almost an object lesson in poise – just by listening to this intense (though quiet) emanation, one can almost see the musician herself making her delicate and small movements. Even her own description of her process is concise and compact; the keywords appear to be “dedicated attention to sound” (with the emphasis on dedication); “details and pure forms”; “extreme precision”; and “simplicity”. As to the precision, I’ll buy into that; every scrape of her guitar strings (if indeed that’s what we’re hearing) is like the draw of a razor across the throat of an enemy, performed by some hidden assassin emerging from the dark shadows.

Superfluous to say that there’s not an inch of wastage or excessive decoration in this highly sparse music; those seeking Pollock-styled gestural movements had best go back to the 1970s and the wilder excesses of free improvisation. There’s also reference to things that Clara de Asís must do herself; one of them is not to intervene, no matter how strong the temptation; the second is do with paying close attention to what’s going on with her ears. I do like the idea that the music is following its own course, presumably within a set of very simple parameters defined by her composition, and that to seek to vary the script in any way would not be a good idea. All of this tends to make her sound as deadly accurate as a snippet of Python code. Maybe that’s not such a bad thing to aspire to, given the results in this case. Unlike computers (or anything to do with digital technology), this gifted person creates music that is compellingly exciting to listen to – tense, taut, hypnotic, yet full of space and wonder.

Quiet-ish it may be, but this work has an implacable iron core at its beating heart. On these May 2019 recordings made in Berlin, a tiny miracle unfolds. From 5th February 2020.