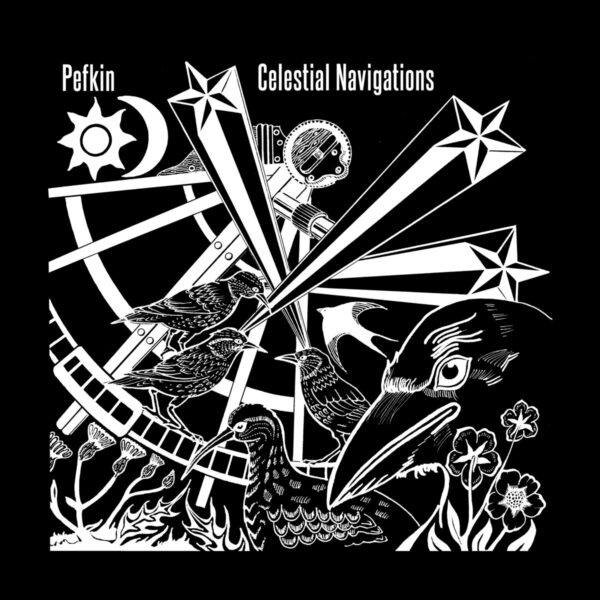 Got the new solo album from Pefkin (Gayle Brogan), who hasn’t beguiled us with her wispy folk-psychedelic music since Into The Beyond World (although we did hear her as one half of Barrett’s Dottled Beauty in 2017 and 2018). Celestial Navigations (MORC RECORDS MORC81) is issued as a vinyl LP with an illustration by Alan Davidson, highly reminiscent of the artwork of Alasdair Gray.

Evidently Gayle has been exploring the more remote end of these islands, since her sojourn on the Orkney island of Papa Westray has led her to speculate about the theme of “self-sufficiency”. The best songs on the album are introverted, somewhat melancholic meditations fit for staring out to sea for many long hours, alone on a hill. Even more poignant is when she expresses this state using the metaphor of “arctic exploration”, summoning up chilling vistas from her imagination on impressionistic miniatures like ‘Tulungusaq’ and ‘Numenius Borealis’. However, ‘I Am John Rae’ leans more towards Scottish folk modes, and indeed so authentic it seemed that I wondered if there was indeed a ballad of this title buried somewhere in a 19th century broadside. In fact, Orkney-born Rae was a lesser-known historical figure and an important early Victorian explorer of the arctic, with a fascinating tale – worked for the Hudson’s Bay Company, friend of the Inuits, went in search of the missing Franklin ships, etc. A mighty theme – I only wish the lyrics could have been sung a bit more clearly; it’s a subject that Nic Jones would have relished, I feel sure. For this song, Alan Davidson reappears with his guitar and effects, and the melody is reminiscent of a sea-shanty crossed with echoes of Celtic tunes.

There’s also the rather eerie and desolate ‘Aurora Borealis’, which is pretty much the tipping point for the listener in terms of reaching for a woollen blanket and a hot water bottle. This one pitches Gayle’s frail and trembling pipes against a barely-there musical backdrop, which features the Aeolian chimes of Fiona Sanderson (half sculpture, half instrument) along with the minimalist violin drones and electronic enhancements. In some ways I prefer this “abstracted” side of Pefkin to when she attempts structured melodies; the open-ended form of a nebulous drone seems to allow her the room to do the mental free association (in both singing and playing) which is one of her strongest gifts. I mention this because I found the title track a bit of a chore. John Cavanagh (her old friend from Electroscope) plays most of it, with a rather dreary synth riff which plods away interminably for the first half. Still, Gayle is pleased with this one, on account of the reference to the old-school navigation methods which clearly stir her imagination, hence the appearance of the sextant on the cover artwork; she also like the blend of instruments, and the way that the song moves away from verses and words, dissolving into an impressionistic mist of layered music. From 13th February 2020.