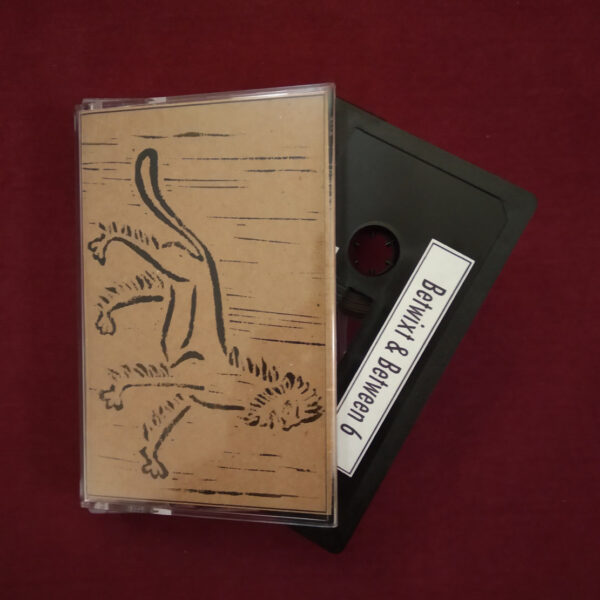 Banjo player Jacken Elswyth returns with her latest tape Betwixt & Between 6 (BETWIXT & BETWEEN TAPES). On this one she splits the tape with a Berlin improviser Ryan Eyers, and draws no boundaries between the folk forms she loves so well and the modes of free improvisation.

She kicks off with a spirited pluck at ‘Lone Prairie’, effortlessly demonstrating a firm grasp of Appalachian folk music and, in her own words, giving the tune “space to breathe” with her insistent repeats and non-stop burrowing technique. It’s as if she wants to rub the tune raw, force it to yield its secrets; such secrets may be well buried. I know not if this song has anything to do with the well-known cowboy song (covered by everyone from Johnny Cash to The Residents), but she learned it from Jonathan Berkoff, himself a scholar and historian of old-time fiddle music as well as a gifted player of same. Berkoff was well-regarded in America; he died in 2015, and may not have left a recorded legacy behind. At any rate, I’m inclined to think of ‘Lone Prairie’ as a death song for a time of mourning, but this performance feels like more like a rather spooky dance tune for a moonlit night.

Besides this, she also plays two outstanding (but short) improvisations on her banjo, one amplified, one acoustic; given my usual predilections for heavy metal and noise, I’m enchanted with the amplified tune, loving the distortion of it. Echoes of a tune which sounds ancient rise up through a plangent layer of moss and mould. On strength of these 3 mins, Elswyth should be asked to play in one of Richard Dawson’s groups. Also on her side, a guest spot from singer Mark Stevenson from Wales; his ‘The Caravan’, murmured over a drone, starts off specific and pastoral and ends up speaking of something of grand significance, but it’s very mysterious. Not sure if this is adapted from traditional sources, but I like the elliptical nature of the lyric. Stevenson’s voice is thin and he struggles to hold a note, but his plain singing feels just right.

On the flip, we have five short ‘Sketch’ pieces by Ryan Eyers for his drum kit. Each one showcases one or two drumming techniques for about three mins at a time, then stops. He certainly plays with precision and restraint, but this work feels too schematic to me; it seems to be music that’s just describing itself. In like manner, the press notes can’t do much more than catalogue the techniques, speaking of “shuffled variations on a single repeating figure”. We almost end up with what amounts to a drum demonstration record. I’m not feeling the artistic sublimation, or the musical development, on any of these audio diagrams, but there may be something I’m missing, particularly with regard to the tuning of the drum kit.