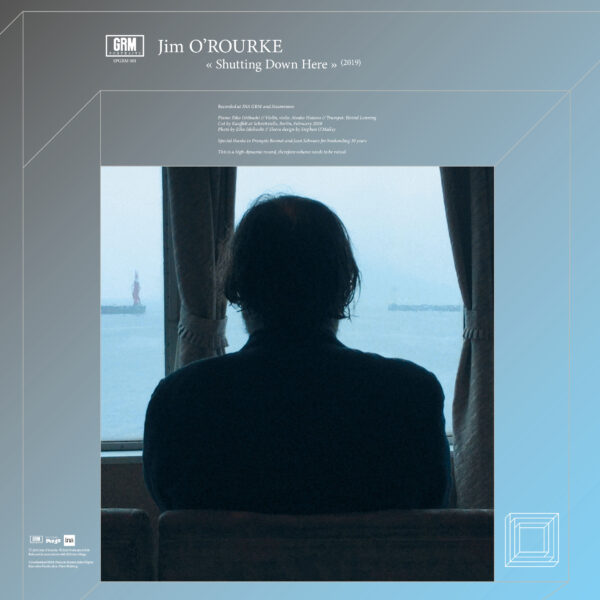 What’s this? A Jim O’Rourke LP, you say? A commission for INA-GRM? On a new Editions Mego imprint?

The redundancy of this review is assured. You’ll either buy this LP (or digital format) because you’re one of his horde of hardcore followers or, like me, you dip in when it looks he’s cooked up something special. Maybe you have other reasons, but it probably won’t be this review. For what it’s worth though, this LP is a good one and having surveyed substantial swathes of the man’s vast back catalogue I feel my opinion counts for something. And if it doesn’t, let’s hear from the man himself:

“It was a commission for INA-GRM so you know what kind of stuff it is. Up to this point it’s the summation of everything I’ve been trying to do with that stuff going back to Terminal Pharmacy to now. It’s basically The Visitor of that stuff. It’s closer to Terminal Pharmacy and stuff like that than the Steamroom stuff. It took a long time to make it—years and years and years.”

So, there you have it. A categorical statement from a , , guy (who probably doesn’t care if you pick this up or not) that this is not just another drone piece, but rather a summation of purpose that’s up there with The Visitor. If you’re familiar with The Visitor then you’ll have some idea of just how much care goes into these things, but not that much because you’re not supposed to: O’Rourke likens that milestone to ‘weaving a rug’ in which the effort remains invisible. Trade secrets. Anyway, he apparently spent 6 months teaching himself trombone just because he couldn’t find the right musician to play one particular vignette (and there’s a lot of them).

Like The Visitor, which is more closely associated with O’Rourke’s pop and guitar work, Shutting Down Here also interweaves myriad vignettes, although his trust in others has deepened like the talent pool and here he draws on the talents of previous collaborators such as Eiko Ishibashi, Atsuko Hatano and Eivind Lonning for the instrumental sections. These evanescent, quasi-classical passages are set adrift in a sea of opiate vapours that hypnotise and pacify, washing into the field recordings and ‘cybernetic beginnings’ that have formed O’Rourke’s stock-in-trade over the years.

As the first in Editions Mego’s GRM Portrait series, Shutting Down Here depicts someone who reveals little about himself yet doesn’t conceal himself in abstraction for its own sake; who thrives in isolation, while networking with all and sundry. The paradox runs deep. While it might be tempting to see ‘Jim’ opening up to us, rest assured that it’s smoke and mirrors. Old habits die hard. After all, this is the guy who resorted to radio controlling a guitar to eliminate himself from ‘live’ performances, who uses silence as a form of musical punctuation/temporal distortion (to notable effect in his recent ambient long-player, Sleep Like It’s Winter), refers to reissues as ‘Old News’, is a reluctant interviewee, notoriously averse to 1st-person references in liner notes, and who permanently emigrated to rural Japan to get some work done. Peter Rehberg must have thought hard about how to frame this one.

The title, unsurprisingly, flows from a kindred spirit: Scott Walker’s ‘Rawhide’, the lead in track from what was his most transformative LP, Climate of Hunter, and a masterclass in imagistic free association. Throughout Walker’s exquisite songcraft, the subject matter was ever secondary to the visceral beauty of his semantic constructions, yet somehow the composer, songwriter and singer made all this magic look quite effortless. While entirely speechless, Shutting Down Here achieves a parallel effect through the semiotics of musique concrète, which scaffold a single, seamless episodic flow of gossamer-wrapped recordings from 1990 to 2020, telling a mystifying new story (and inducing temporal amnesia) each time; less a retrospection than a studied fumbling to recall past experiences.

As the latest chapter in a seemingly relentless output, the last few years of which include multiple CD box sets, the experimental diary of Steamroom, manifold collaborations, the odd pop album and a laborious reconstruction of Roland Kayne’s A Little Electronic Milky Way of Sound (for no fee whatsoever), Shutting Down Here still stands out from the crowd. Infused with memories of favourable encounters with the likes of Brunhild Ferrari, Bernard Parmegiani and Ivo Malec (whom he freaked out simply by knowing his music), it might just prove to be a classic of the GRM canon as well.