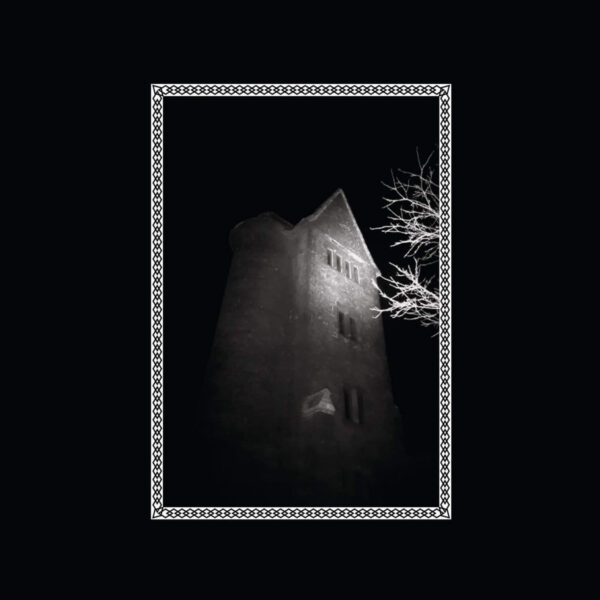 Two underground raw BM acts – Lamp of Murmuur is based in Olympia, Washington state, Revenant Marquis is based in Wales, in the UK – are brought together on this self-titled split originally made for British label Death Kvlt Productions and now also released on tape by Canada’s Les Fleurs du Mal Productions. Revenant Marquis delivers four chapters of “Wye is the Moon” and together these are very energetic and urgent riff-based songs featuring thunderous percussion, constant grinding guitars and roaring monster vocals in the background. Listeners may not care much for the vocalisations which sound far too smothered and too deep in the mix to be heard clearly, and come across as a bunch of demons arguing over space in their little corner of hell rather than as the anguished souls screaming in pain and hate that they probably should be. “Wye is the Moon” Parts I to IV range from fast-paced galloping to more epic atmospheric songs that feature some lead guitar soloing to droning dark ambient. Of the four tracks, I prefer Parts I and II, Part I being fast and punishing, and Part II having an intense and hellish atmosphere with a painful head-bashing guitar riff repeating in parts and those monsters moaning in agony in the background as they’re being tortured.

I actually came to this split because of Lamp of Murmuur’s presence on it, after I heard “The Burning Spears of Crimson Agony” which has some really great music. Sure enough on his part of the split LoM does not disappoint with his contributions in the epic atmospheric raw BM genre. “… And So Falls The Night” is a doomy horror-movie soundtrack piece dominated with synthesiser and spooky black psychedelic drone swirl – even though it’s all keyboards and nothing else, it has such an unforgettable sinister aura that I want it to keep going! The track that follows, “Intercourse under the Ninth Spell”, is actually even better: a meaty head-banging rock’n’roll groove meeting sickly unearthly ghost ambience halfway through the song (and reappearing near the end) is sure to send listeners off into whatever blissful state exists in evil occult atmospheric raw BM. A big plus with LoM is his use of synthesisers in raw BM: he uses them as instruments in their own right, not as substitutes for acoustic instruments or to emulate Western-style full orchestras playing classical music. “With the Moon as My Robe” is ordinary compared to the other two tracks – for some odd reason there are no memorable groove-tastic tunes here – but features plenty of ferocious snarl, animal growl and howl and lots of screaming in the background. The mostly synth-dominated coda has good tone – it is so unearthly and plain exudes glittering evil – and is easily the best part of the track.

Without doubt the short tracks by Lamp of Murmuur are the highlights of this split and the riffs on “Intercourse under the Ninth Spell” are definitely 2-die-4 crunchy delicious. Other parts of the split have their good moments and I would have rated the Welsh reverend act much more highly if those beasts hidden within the music were allowed their time in the sun (or under the full moon) so they can be heard and the emotions and pain they feel might be more obvious to listeners. With music of this quality, even with its inconsistencies, I barely notice that the production is basic and is just good enough to allow everything to be heard and for the frigid cold of the sonic universe created by the two bands to penetrate listeners’ heads and bones. Revenant Marquis and Lamp of Murmuur complement each other very well with their powerful yet different styles of atmospheric raw BM.