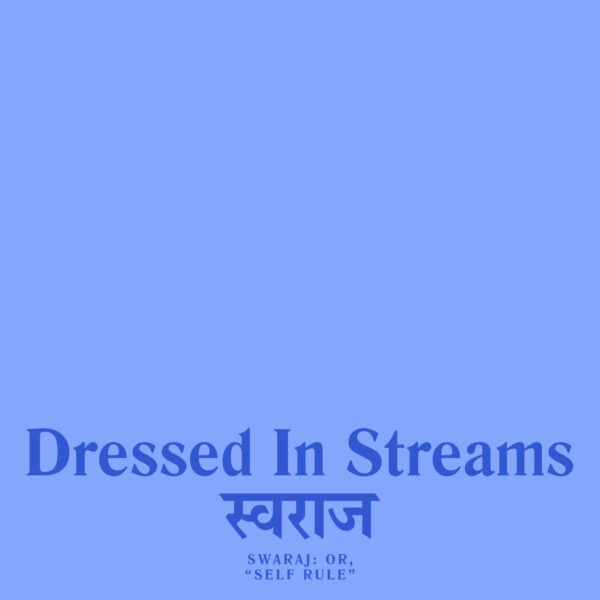 Nearly seven years after its last release which was a compilation of earlier tape recordings, Dressed in Streams is back in action with its trance-like atmospheric BM interpretation and unorthodox opinion of India’s colonial history under the British Raj and the country’s pursuit of independence in the first half of the 20th century. On its new full-length “Swaraj: or, “Self Rule” ” the songs may be shorter, more structured and less sprawling and punk-like, but the attitude is still aggressive with the warning that violent action and revolution are never far away as tools of freedom. Track titles like “Fuck the British Raj” and “Tryst with Destiny” leave no doubt what the DiS main-man (his name still unknown) thinks of the colonial period in India and how India had to fight for its independence from a brutal imperial power. Although I note that in the album’s title, the term “self rule” has double quotation marks which might indicate an ironic or sarcastic attitude on DiS’ part as to whether India has truly achieved swaraj in ways other than the formal declaration of independence and surrounding itself with the usual expected accessories of formal independence such as its own armed forces and a parliament.

The music is a bit less immersive and trance-inducing than it used to be but it has more definition in the emphasis on power riffs and melodies, and the vocals also have more form as ghost-like spirit voices actively swirling through the songs like flying serpents using winds to travel. Some songs feature samples of Indian subcontinental folk music or of historic political speeches now worked into the fabric of the music rather than merely book-ending tracks as after-thoughts. The songs sound very much as if they’re missing actual sung lyrics though I know vocals in the background are moaning or screaming through the constant grinding riffs. Perhaps this is because the tracks have become much more conventionally song-like and even a bit death metal in their structures and are missing that layer of synthesiser melody that previous DiS releases used to have. While the songs are much more focused with all instruments all forging ahead as one very powerful and blistering metal-machine, at the same time I miss that immersive, consciousness-changing quality the old DiS work had.

Even as it is, more metal than blackened trance psychedelia, “Swaraj …” still boasts variety with “Diyas Lit the Ganges” and “Indrani, Radiant Ruby” having a more punk-like thrash style than other songs, though they all tend to be melodic and quite heavy in their sound, and the title track “Swaraj” being a slower and more brutal power metal song. I found the title track monotonous and repetitive and even though it’s the longest and probably the most important song on the album, it was the least impressive of the lot.

While experimentation is strong here with noise (“Fuck the British Raj”) and atmospheric soundscape / soundtrack music (“Streams of Paradise”) featured in parts, the album does veer very close to being alt-mainstream metal and the music deteriorates into tedious bludgeoning on tracks like “Swaraj”. There might be a message in DiS’ current turn towards a more “metal-sounding” style about the nature of the path India chose after independence, that the country has pursued policies that have turned out to be neo-colonialist and which have tied India even more closely to Britain and other Western nations, with perhaps a loss of cultural and psychological independence. Meanwhile millions of Indians continue to live in more and possibly worse poverty than their forebears experienced during the time of the British Raj. I am hoping that DiS don’t follow what post-1947 India has actually done but instead try to present an alternative independent India that the nation could have been and still could be on future recordings.