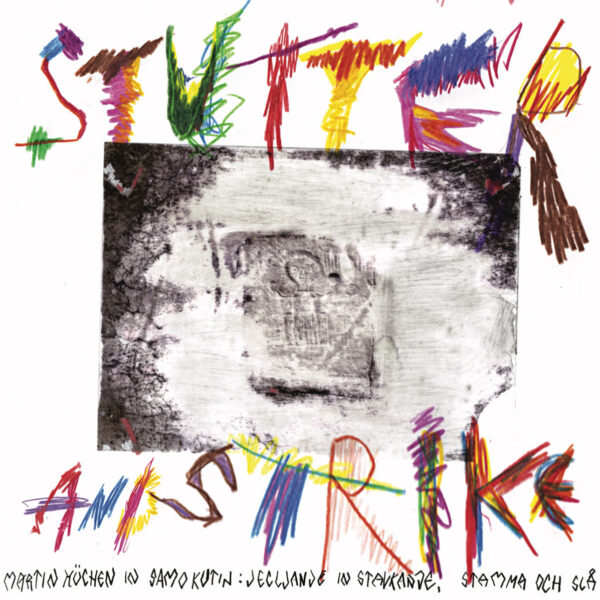 Another strong release from the Zavod Sploh label in Slovenia. Not long ago they sent us The Ear Is The Shadow Of The Eye featuring Tomaz Grom, who has other releases on the same label such as Sam, Ja… and Nepretrganost. They also put out the unusual voice record Lump In The Throat made by Irena Z. Tomazin. Today’s record is called Stutter and Strike (ZAVOD SPLOH ZASCD 021), and is credited to Samo Kutin and Martin Küchen, and documents their Sept 2019 sessions when they made these strange sounds is two locations, one of which was a Chapel in Svete Gore.

The name of Samo Kutin has come up once before, as one of many who appeared on this eksperiment Slovenia compilation from the Sigic label, but now we have a chance to appreciate the extent of his artistic creations. His main instrument is the hurdy-gurdy, that venerable instrument with its long history often used to produce interminable droning sounds as the player grinds a handle to rotate the rosin wheel against tuned strings. Kutin has modified his hurdys, perhaps aiming to extend the reach of this musical device into the realms of avant and free improv much like Jonas Kocher has been striving to do with the accordion; Kutin is also an inventor and instrument builder, and we might hear some instances of his hand-made string / percussion instruments on this record, although he is only credited with “objects”, as well as percussion and acoustic spring reverb.

Meanwhile visiting guest star Küchen from Sweden plays saxophones as well as snare drum and tape recordings. I think we last heard form him with his amazing 2017 record Lieber Heiland, Laß Uns Sterben for Sofa. For these unusual productions, I suppose the term “strutter and strike” – or to use the Slovenian title, Jecljanje In Stavkanje – could simply be descriptive of the playing techniques used by Kutin and Küchen, but for me it also alludes to the halting quality of the music, which for the most part stumbles along as though the entire wayside is strewn with thorns. Not all the sounds made are unrecognisable, but a lot of them are quite odd – each player stretching the limits of what can be extruded from their devices and still pass muster when called upon to line up in a semi-musical moment. I’m certainly feeling the rustic charm of Kutin’s rough-and-ready approach to playing, which results in deliciously ungainly and unpolished nuggets of acoustic chunks thrown into the barrow like so much firewood.

This all feels like it’s some distance from the more formal “extended technique” catch-all phrase, which I usually associate with a trained improviser working hard to evolve new sounds by dint of craft, unusual fingering, circular blowing, that sort of thing; instead we seem to be lurching towards an innovative musical space in a much more spontaneous and enjoyable manner. The only drawback I can find with Stutter and Strike is the rather slow and sluggish pace with which these experiments unfold; it can be interpreted as a certain hesitancy in the music, as if neither player is quite sure where to head next. On the other hand, there’s an odd pleasure to be had in coasting around in a horse-drawn chariot with wobbly wheels, allowing one to admire the scenery through jiggling eyeballs.

My faves include the “noisier” workouts like ‘Hammaröga’; if amplification had been involved, and I’m glad it isn’t, then Wolf Eyes would give up. The opening cut ‘Uncaged (Take 2)’ is also quite a gnarled wildie, one where we can almost hear the creaking of wooden moving parts, and judging by title we’re evidently intended to take Küchen’s unhinged puffs as the growls of a tiger. Click on to the closing track ‘Hjärtspion’ if you want to get the idea of what this team-up is capable of; it’s a poignant mix of melody and noise, where two opposing forces come together in the same space and try to settle their differences, find common ground. A nice one, from 20th February 2020.