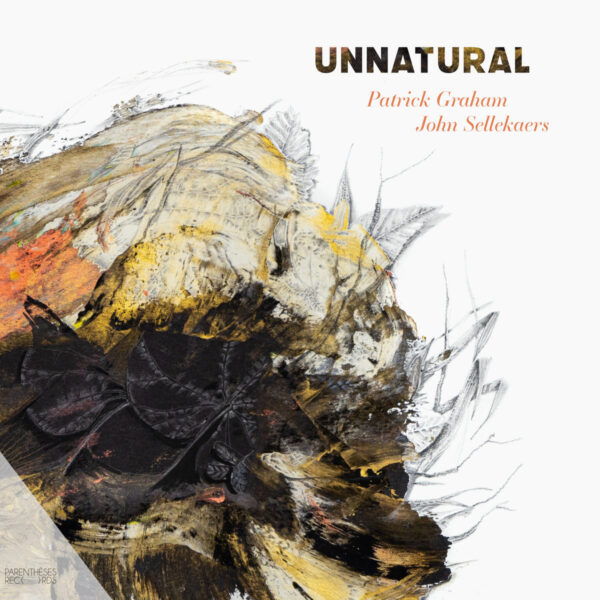 Patrick Graham is a classically-trained percussionist in Canada with a wide range of interests – he’s formed and played with lots of bands and combos, including Small World Project and La Nef, plus he also composes music and finds time to instruct others in the mysterious ways of the cymbal. Nor does he confine himself to classical music, embracing folk and free improv with his free hands, while also engaging with dance and film soundtrack music (both of which, nowadays, seem to require a mandatory mention when a press agent is compiling your CV.) In 2007, Patrick Graham struck up a spark of interest with John Sellekaers, a visiting Belgian who also happens to be an electronic musician and skilled with the dark arts of electro-acoustic processing and editing. Let me reimagine your percussion improvisations, said John, although perhaps not in those exact words, and soon went back to his home country clutching a reel of tape (or more likely a digital storage disc full of soundfiles) in his composerly talons. Well, the collaborative project got stalled for a few years, but now thanks to the wonderful label Parenthèses Records in Belgium we have the Unnatural (PREC12) album served on our soup-dish. I would say it’s served piping hot, but it’s a cool array of cold cuts…indeed such a sombre and dark record it be that I just had to look into the murky history of our man John Sellekaers, a name which has not shown up in our police files until now.

This is very surprising, since this half-Canadian half-Belgian fellow has a production CV going back to the mid 1990s that brings most collectors to their knees; if it’s on CD and constitutes grim electronic / industrial noise, chances are that Sellekaers was the mastering technician for it, slaving away at his famed Metarc studio where sparks are known to fly. Among his creative guises in the ambient genre, there’s Feral Cities, Meeple, and Night Sky Pulse, and he’s also worked with my favourite of the original dark ambient acts, Scorn. He’s wrought his evil magick on this project, for sure; while it’s possible to characterise Unnatural as a percussion record with its long metallic shrieks and clattering cymbals and ominous thumps, it’s also an exemplary electro-acoustic exercise, exhibiting profound and radical transformations of sound that introduce extra layers and moments of excitement. Ignoring the press blather about “imaginary ritual” and “a narrative…without any linear development”, I will agree with the line of thought that indicates something about “the smallest details” being given space to breathe. Rather than pile up a mish-mash of sounds every which way into a nightmarish construct of lurching garbage, Sellekaers demonstrates considerable sympathy with all the nuances and dynamics of the performances of Patrick Graham. From this bond, something quite new emerges. It might be lugubrious and foreboding like the dark night over Moscow, but never is it as heavy as a leaden cannonball of hate aimed at your stomach.

It shows there is still valuable work to be done in the field of musique concrète and its derivations; and perhaps we need more records like this one that stand a chance of bridging the gap between dark ambient and classical music. Less keen me on the formless cover art, by Tamar Kasparian, but the visual theme of “vegetal chaos” does link to one of the intended strains of this record; the music does indeed often break out into a series of crumbly ruinous textures, evoking explosions and ruined cities. A strong set…chilling…serious-minded. From 12th February 2020.