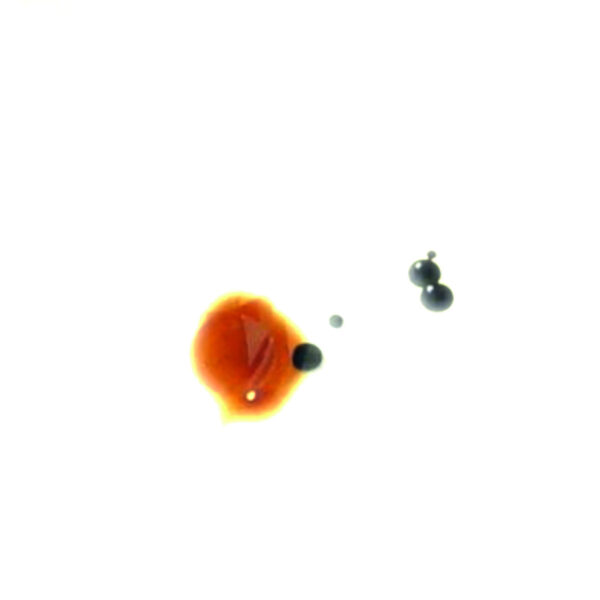 Angel are a duo we don’t seem to have heard from since 2006, when they made the In Transmediale record for Oral in Canada and transformed the cello playing of Icelandic goddess Hildur Guðnadóttir. Of course she’s become even more noticeable in the culture since getting picked up by Touch, recording with Sunn O))), and doing the Joker movie soundtrack. Well, Angel have updated their name to Die Angel now, and I find they’ve been doing their droney process thing since 1999.

The two involved are major league big munchkins – Ilpo Vaisanen (formerly of Pan Sonic) and Dirk Dresselhaus (records as Schneider TM), and my sense is that they reserve the Die Angel shroud for those occasions when they feel the need to break down the grid-mark profile and minimal electronica harness to stretch out into long-form blobberoos of red-carpet length, and the thickness of a New York sidewalk paving stone. A lot of it is just to do with the choice of armoury, in this case making a decision to work with guitars and loops alongside the electronic boxes of devilry and burnished gravel necklaces. On the four tracks that meander their snakey way across the surface of the Utopien I LP (KARLRECORDS KR077) the main concern is with sound, not with form or composition as such, and every audio event unfurls its coiled skin for eight or ten minutes without really advancing very much as it does so, but while it’s passing through like the giant cockroach subway-train they evidently hope it to be, you can’t really ignore its massive presence.

I may have used the “drone” word already, which certainly isn’t the best way to characterise every single suppet and locklet of this giganto Ferdinand; the opener on the B side, ‘Coup D’Etat’, for instance, is 6:01 of bubbling cauldron malarkey and rare bird snippets, sparks fizzing out in a controlled way from under its seething lid which only the master chef dare to raise. Indeed it was this cut that reminded many European delegates at the conference about the days around 2001-2002 when the Mego school of aggressive digital snipery and attackage was the bill of fare on everyone’s crowded agenda. On the other hand ‘Epikourous’ is a real droning lizard that has that vague “rise and fall” effect that serves to evoke the sense of a hideous ogre-like organism colonising our world in its unwelcome and invasive way. And ‘Cargo Cult’ doesn’t exactly drone in the exact manner as proscribed by 15 officials working for the Strasbourg Institute of Standards for Long-Form Electronic Music, but it sketches in menacing trails with its gestural swipes across heavily-processed Gibson Les Pauls (and maybe Fenders).

The finale of this miniaturised Theatre of Cruelty is the very odd and ill-defined murk of ‘Khormanoupka’, where the ominous droneington is pushed to the back-ridges so that we may better perceive the ungainly loping and awkward movements of some nameless, ungainly shape clopping forwards to face an uncertain doom. It’ll come as no surprise to many that Die Angel love to team up with their friends to produce this sort of tarmac for the cultural avenues, and besides Guðnadóttir they’ve also done it with Lucio Capece and BJ Nilsen, and the eminent avant-guitarist composer Oren Ambarchi who adds his blackened axe to today’s record. Oren also played on their Entropien I record from 2017, where he drummed. That fact made me think we could have used a bit more solid rhythm on this Utopien I affair rather than the digital pulse that runs through it rather uncertainly, but then we might be going against the grain of the Die Angel aesthetic which pretty much insists on a boneless state for the human form.

Mysteriously, the press notes are calling this release “a clear political call”, indicating that it signposts “new ideas and approaches” for what the future should be like, at a time when the whole world is in decline. This pessimistic observation may or may not be correct, but it’s hard to discern in the music on offer here what the proposed corrective measures may be. There’s little clue in the titles, unless we’re supposed to read ‘Coup D’Etat’ as a call to arms; and the word ‘Khormanoupka’ is simply lifted from the works of that most pretentious of self-centred philosophers, Gurdjieff, with no clear indication of context or direction. I’m all in favour of music that agitates the mind and exhorts the listener to think, question, and act – LPs by This Heat, Art Bears and The Pop Group come to mind – but Die Angel on this occasion are pretty much advising us to scowl at society, brood and plot revenge, stroking chins thoughtfully. From 21st February 2020.