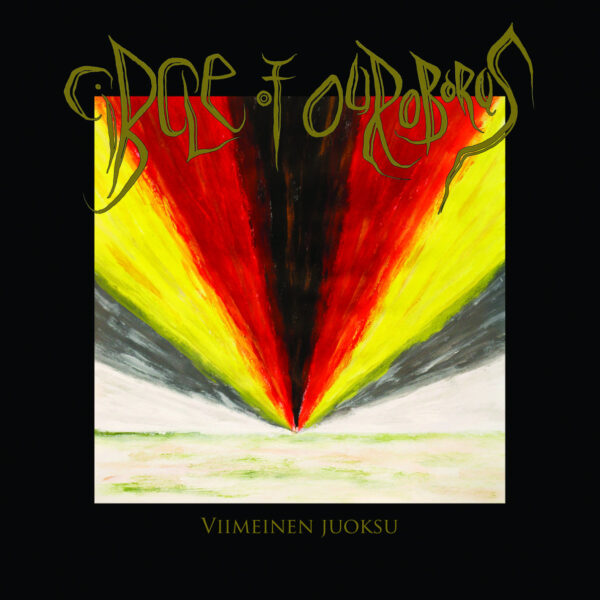 In a fair universe that exists in parallel with ours, this Finnish duo would be hailed as one of the most remarkable success stories in metal and rock generally for having forged a singular path through the depressive grey zones where post-punk, post-rock, post-blues, black metal and folk meet and mingle, developing a style of music that confounds its fans by jumping abruptly from metal and rock to pure acoustic and folk and back again from one album to the next, yet always maintaining an off-beat edge and an outsider attitude no matter what musical detours it takes. Circle of Ouroborus has consistently been prolific as well, for an outsider group, and astonishingly “Viimeinen Juoksu” is the band’s 18th full-length recording since its first album “Shores” came out in 2006. Not surprisingly for a band that has released so many varied recordings over the past 15 years, Circle of Ouroborus’ offerings haven’t always been consistent in quality to the extent that some albums have seemed to sleepwalk their way through sometimes muddy and inaccessible production jobs; but this recent release on Greek-based underground label His Wounds – the band has patronised quite a few obscure labels over its career! – sees CoO with a clean and clear if still dark and depressive sound, and back at the coalface where black metal meets blackened rock’n’roll.

After an instrumental black-gaze / noise introduction, unmistakably desolate in mood, the album proper begins with “Alaston teitoisuus” (“Naked awareness”) where the style of the music that will characterise this and the next six songs is established: melancholy black-gaze post-rock at once blurry and clear thanks to background tremolo guitar noise and clean-toned lead guitar melodies going at once paralleled by two sets of vocals, one set typically harsh BM and the other clear but both being equally shouty and seeming to come in part from an occult spirit world. This has always been CoO’s signature both musically and lyrically: being very much of the contemporary post-industrial world in decline, with its loss of hope in the institutions and ideologies that were supposed to lead us all into happiness and prosperity, and the consequent existential bleakness that has replaced that utopian vision; and at the same time existing outside that world with a foot in a parallel occult universe where the truth resides but turns out to be more complicated and unknowable than we with our limited senses realise. The music and melodies are familiar, the songs fit into the usual song composition conventions, and some tracks boast good hooky tunes – and yet there is something intangible and distant about them, as if at any moment they might instantly dissolve into white noise static.

All tracks are good and while they may sound similar because they all share in the same musical style fusion, some stand-out tracks are “Varjonhauta” for its urgency, “Auringon Portti” for drama, bleakness of mood and the despondent music, and the slightly doomy “Raunioita ja Oksanlehvia”. The title track is a complex beast in its mix of backs-to-the-wall defiance and hopelessness. Obviously Finnish speakers will get more value out of the music and the lyrics, and how these might or might not complement each other, than the rest of us but even those who don’t know Finnish can’t fail to be affected by the intense emotion and the mix of aggression and despair, often in the same songs.

After all these years and more, the Circle of Ouroborus guys can still spring surprises on their followers who think they know everything the band has done and will do. At the same time this release is (unexpectedly perhaps) a highly accessible one with a fairly clear sound and pop-catchy garage punk tunes, and might capture more than just a few new fans.