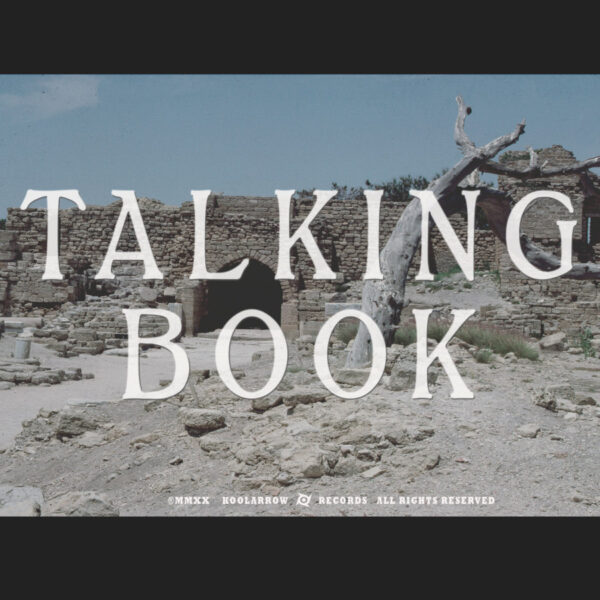 It helps to foster a sense of exclusivity to your music if you’re not too prolific with your releases, thus building up a cult following. In a way it’s a refreshing approach, compared to what many bands used to do around 15 years ago (e.g. Reynols, My Cat Is An Alien, Wolf Eyes) which was to release more records than anyone could possibly buy or listen to, even if a fan. In the case of Talking Book, it’s been 11 years since this American duo put out their first self-titled record, which we noted in 2011 – “a set of rich drone-form pieces packed with plenty of tasty textures and maintaining a dream-like sinister aura at all times”.

The two players Bill Gould and Jared Blum have now become a threesome, through picking up Dominic Cramp, and they evolved from a studio band into a live act and toured America and South America in 2013, before returning to California to make some new recordings. Gould is also the bass player for Faith No More, but I never heard this band; he also happens to run the label Koolarrow Records that released this and the 2011 album. Jared Blum also runs a label, Gigante Sound, and through this connection I suppose is how Cramp (who is the label co-founder) also got on board. We heard Dominic Cramp with his Lord Tang album, which seemed pretty good – “whimsical interpretations of his cherished ‘Golden Age’ dubs” was Stuart Marshall’s take on on this 2013 release. As for Blum, he’s probably better known as Blanketship, under which guise he’s made quite a few records of abstract electronica for his own label.

Today’s release is Talking Book II (KOOLARROW RECORDS KACA042), and having spent so much space detailing the creative endeavours of the three individuals, it’s ironic that we have a record that’s almost completely personality-free, and anonymous in its tone. None of the threesome believe in things like expressive playing, technique, emotion, any of that nonsense; instead, this is a very serious-minded work of sound collage, cross fertilised and spliced with elements from all over, including drone, ambient, musique concrete, and general abstraction, and forcibly mixed up with a few remnants of traditional song structure and form, albeit drawn from the very far end of any such genres. To put it another way, Talking Book would like to think they’ve gone further out than Bowie and Eno, yet remain accessible to a generalist audience. There’s also a concern with narrative and story-telling, evoking cinematic forms – a concern which is expressed in the cover art and the tune titles, each of which reads like a chapter from a book of experimental prose or the caption to a particularly unsettling surrealist painting.

Although sequenced as 14 separate tracks, the intention is that Talking Book II should be enjoyed as a “total experience”, which was the thinking behind arranging for a vinyl issue of the album. Quite a few high ambitions at play here, but it’s nice to report that the players pull it off for the most part. The collage aspect is the most interesting dimension, and it’s through very careful arrangement and judicious tape splices that some of the strongest effects are attained, often quite confusingly ambiguous and rich in nature. Secondly, there’s a lot to be said for the very non-natural sound of the record, at times almost contrivedly so; there’s no trick of distortion, muffling and processing that they won’t try out, seemingly, all in the pursuit of their grand vision. We haven’t heard this profound degree of de-naturing since the records of Biota and Mnemonists. End-to-end, the record leaves me with a strange taste in the roof of mouth and a very fuzzy head with brain cells gradually drifting away in the wind. I also feel like the fabric of the world is suddenly decayed and rotten, and that the very gates of my mansion will crumble under my touch. If these were the sensations aimed for, then we can count Talking Book II a success. From 21st February 2020.