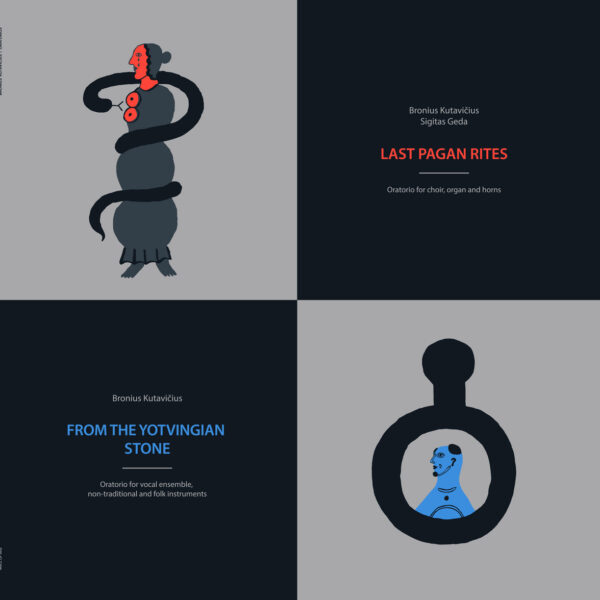 Originally written and released by Lithuanian composer Bronius Kutavicius as separate oratorios in 1978 and 1983 respectively, “Last Pagan Rites” and “Iš Jotvingiu Akmens” (“From the Yotvingian Stone”) have been combined together on digital and LP format by niche music label Music Information Centre Lithuania. MICL dedicates itself to encouraging and releasing a diverse range of contemporary Lithuanian music from formal contemporary compositional music and folk styles to jazz, rock / pop, electronic and experimental genres. Kutavicius represents the former aspects of what interests MICL: as a “classical” composer of operas, oratorios and film scores, Kutavicius’ work is inspired by ancient Lithuanian nature-based polytheism and the associated traditional folk music and songs. His music might be expected to draw heavily on melodic motifs and rhythms from Lithuanian folk music but it’s actually quite minimalistic with perhaps just one or two layers of instrumentation playing simple melodies or melodic motifs. Serene and orderly, the music featured on this release comes across as celebratory, joyful and warm, and the singing especially is inviting and draws listeners deep into a world in which the ancient Lithuanian gods and their worshippers were very much partners working together to preserve harmony and stability within their respective spheres.

“Last Pagan Rites” splits into four movements that reference different aspects of pre-Christian Lithuanian belief and worship, and which involve group singing or solo singing with choral back-up and sparse instrumental music. The singing on the first movement can be quite heavenly and radiant as it carries the melody, with the horns and whistles in the background mainly adding atmospheric flavour, thus giving the music an ethereal and unearthly ambience. Female singing dominates the second movement which seems quite unusual as the movement’s sub-title “Worship of Medvegalis Hill” may be a reference to Medvegalis fortress which was attacked many times during the 14th century by the Teutonic Knights before the Lithuanians officially converted to Roman Catholicism in 1386 with the marriage of their Grand Duke Jogaila to the teenaged Polish queen Jadwiga. Third movement “Incantation of the Serpent” has a ritualistic aspect with a repeated melody by a lead solo vocalist against a background of continuous whispered singing and chanting. “Worship of the Oak Tree” may represent the conversion from nature worship to Christian worship as melancholy singing is replaced by sonorous and triumphant organ music.

“From the Yotvingian Stone” is a shorter work with two movements but what it lacks in length compared to “Last Pagan Rites”, it compensates by featuring energetic and sharply forceful angular percussion rhythms, harshly shrill whistles and jew’s harp, and strident chanting in its first movement; and in its second movement, a plaintive mix of woodwind melodies and a chanting women’s choir, later to be joined by solemn male singing, all competing for listeners’ attention. The polar contrast between the two movements in mood and timbres could not be greater, and makes this work quite a dramatic one, especially when performed live.

While being well versed in Lithuanian history, folklore and music traditions would enable listeners to appreciate this set of recordings and judge Kutavicius’ aims behind them fully, these two works can also serve as an introduction to the work of a significant 20th-century Lithuanian composer for those not familiar with Lithuanian culture. The oratorios mix Lithuanian folk music traditions and instruments with elements of 20th-century musical developments to produce sometimes very powerful and original work detailing human interactions with the forces of nature. Kutavicius appears to be part of an ongoing neo-paganist / minimal neo-primitivist trend in Lithuanian culture and music reacting against the Soviet realism of the country’s Soviet past (1945 – 1991) and previous influences from Polish culture and whatever Roman Catholic Church authorities in Poland and Lithuania approved. Of course one can find good and bad (and sinister) aspects in a self-consciously neo-paganist musical movement, especially one whose followers may not be aware of how similar movements in other nations have often ended up subsumed by fascist war-mongering politics, and one hopes that contemporary music trends in Lithuania do not fall into similar paths.