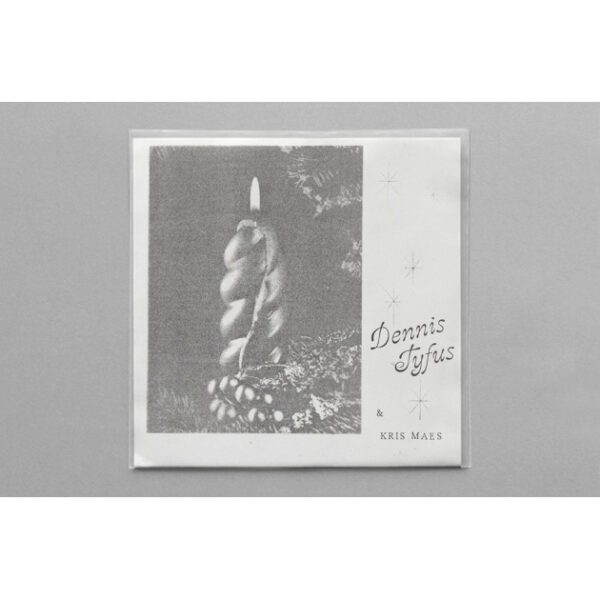 Got a couple of 45RPM singles from the ever-reliable Meeuw Muzak label in Belgium…these are both from 2016 so this post belongs in the “long-overdue” section of the online magazine. I say ever-reliable to denote a label that has dependably remained quite unpredictable, only ever issuing vinyl singles, always in grey washed-out covers, and making some very eccentric and delightful stylistic choices along the way, including the extremes of punk-rock history, modern electropop from the furthest reaches of the underground fringes, and unclassifiable slices of avant-ish experimentation and noise. On MM047, Dennis Tyfus enlists the help of Kris Maes to turn in a very odd Christmas record, one that simultaneously sends up the holiday season as much as it celebrates it…Tyfus from Antwerp has long been conducting his own campaign against common sense in the form of the absurd and abrasive Ultra Eczema label which he runs, home to many a blast of confusing and anti-social noise (including bombardments from his own mixing desk), but here he’s opting for a quieter and more considered approach. On the A-side ‘Stevige Nacht’, he makes a puzzling collage of cassette tapes, evidently sampling some records of earnest carol singing or religious church hymns, to produce a gently-scrambled form of musical gibberish. Then the sweet yet sarcastic guitar of Maes comes in, and we realise we’re suppose to be hearing a “version” of ‘Silent Night’. This brilliant track almost arrives laden with its own brand of pine-cone scent and nauseating room candles…required listening for good honest humbugs everywhere come next 25th December. The short B-side is titled ‘De Kerstdagen’ and it delivers 1:17 of mostly spoken word, twisted into incomprehensible knots until it resembles a low form of sound poetry. Full marks; from 25/11/2016. MM046 is a split between Wendy Gondeln and Norbert Möslang, and this one’s more like serious noise and sound art but delivered in a highly playful manner. Both creators offer us two views of Betty – the release is “a pair of recondite Bettys”, according to the label. Wendy Gondeln is in fact an alias for Albert Oehlen, a modern German painter who may be familiar to those who frequent the hallowed halls of the Serpentine or the Saatchi Gallery in London. His visual art “humorously critiques the hallowed respect and predominant values of traditional painting”, say the experts, credentials which make him a shoo-in for this label. On Wendy’s ‘Betty’, we can hear a drum machine, keyboards, and a violin scraping in the most deliciously astringent manner; Pete Um, who wrote notes for this record, relishes the implied “violence” that’s already present, as if Betty’s entrance into a room were enough to cause spontaneous fights to break out. I never heard a Wendy Gondeln record before, but I see there’s a 2017 compilation of his music called Projections (also featuring friends and guests) which looks interesting; these are described online as some species of experimental techno or electronic music, which kinds of fits the profile. Norbert Möslang, former member of Voice Crack and master of broken electronic devices, takes things further with his ‘betti_corr’ on the B-side, once again showcasing that violin, which now sounds positively dangerous. With panic and consternation in the air, this music advances determinedly through distortion and disorienting effects, to arrive at microtonal effects that would make Ligeti turn pale, and also serve as a suitable Bernard Herrmann soundtrack for an unreleased Hitchcock movie. Come to that, I can now imagine Hitchcock turning his hand to telling the story of Betty, in a film perhaps called Black Maria or Lipstick Crime. Ideas for a scenario welcome, as is this unique and excellent record. From 10/03/2016.