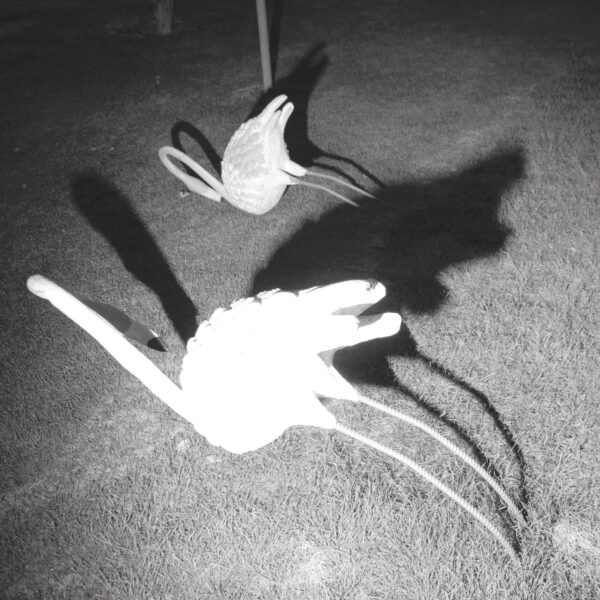 Tehran-based composer / guitarist Siavash Amini has been active since at least 2012, among other things chalking up a very respectable discography of albums, singles and EPs across a number of labels over the past several years, as a solo artist and a collaborator with artists. “A Mimesis of Nothingness” is Amini’s fourth full-length recording for Swiss label Hallow Ground and is the product of a collaboration with photographer Nooshin Shafiee, some of whose pictures appear in the booklet that is part of the album’s packaging. The situations in Shafiee’s photos (all taken in Tehran) and the moods captured therein are interpreted by Amini into soundscapes that explore space, as part of a longer term project of Amini’s to discover how one’s experience of space or a particular space is shaped by both the individual subconscious and the collective subconscious (through culture and the values transmitted through that culture).

Even if you don’t actually see those photographs of Shafiee’s that inspired the music, you can hear the sounds certainly express a great deal of disquiet and intimations of alienation from the environment (be it the immediate family or neighbourhood environment, or the broader cultural environment). “Lustrous Residue” expresses the unease the listener might feel in suddenly landing in an unfamiliar society with its sometimes shrill tones and light noise crackling. “Perpetually Inwards” is a much darker, more introverted track where the shadow spaces beneath and between the tones become more prominent as the track continues. By contrast “Moonless Garden” is a peaceful if rather sombre soundscape work of slow melodies and background found sound recordings, with a feeling of quiet resignation in a world that goes about its own business with no apparent concern for those suffering from alienation and isolation.

Of the six tracks, the one that appeals the most is “Observance (Shadow)” for its mix of moods and emotions ranging from melancholy and longing to fear and terror as soft fluttery tone wash and harsh cutting metallic noise fight for dominance. An uneasy compromise seems to be the result. From then on the darkness continues in “A Collective Floundering” and “The Stillborn Baroque” with more unsettling soundscape scenery of background noise wash, repeating drone loops or blips, or the sounds of a fun fair with distant background conversation.

While the album certainly presents a very alienating portrait of Tehran’s less pleasant aspects, there also seems to be nothing here that suggests the artist is trying to make some sense of what he or Shafiee sees in Tehran’s complex nature and to come to some personal resolution about his place in the city and its environments. Being a capital of nearly 8.7 million souls, attracting millions more from around the country and beyond, in a country that has experienced upheaval, war, ongoing threats and sanctions from the rest of the world, and rapid internal social and economic change, Tehran is bound to be extreme and tough on its inhabitants – yet even in a harsh, gritty city there can still be moments of beauty and serenity, and there can be people ready to party and to share in the joys and sorrows of life. Whether Amini or Shafiee can also see this, I do wonder.