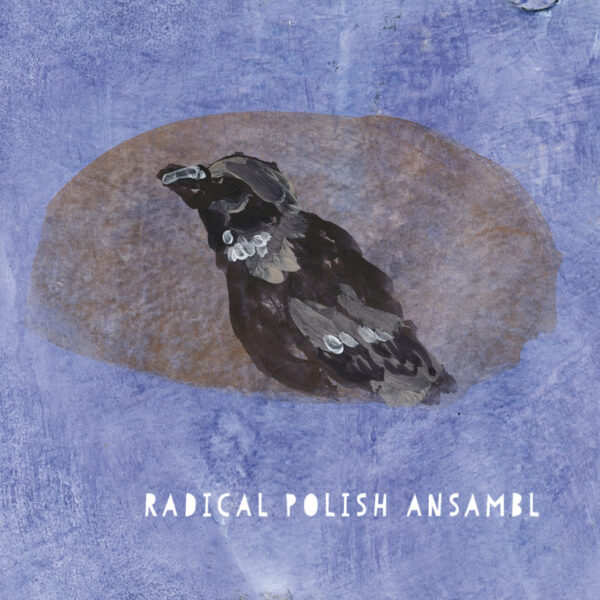 Item with blue cover and crow illustration is by Radical Polish Ansambl, and is their self-titled debut (RP01) on a label called Radical Polish Culture, brought to us by the good graces of Unzipped Fly Records and Bolt Records. Six violinists – to be precise, three of them are credited as playing the fiddle – are joined by a percussionist and a “whisperer”, as they perform seven instrumental pieces, by turns lively and thoughtful.

The plan is to attempt a modernist update on the traditional Polish mazurka, a musical form associated with the countryside, and more often than not used for folk dancing; the Ansambl want to inject it with contemporary strains of minimalism. We think the culture of the mazurka started around the 16th century in East Poland, but its popularity and influence spread across the world, first to Russia and Germany and then to ballrooms in England and France. By the early 19th century, English dancers were hopping to the mazurka, and some 20 years later Chopin composed over 50 mazurkas for the piano, honouring the tradition of his homeland. The players in the Ansambl have been recruited from other groups including L. Stadt, Lautari, Tegie Chlopy and Odpoczno, and their ingenious idea was to add Piotr Gwadera playing the “old village drum set”, a turn of phrase guaranteed to suggest everything that’s rustic and hand-made, in keeping with the project.

So far so good…while I know nothing about this specific musical form, it’s evident that these tunes have mostly been derived from traditional folk sources, and the players do an excellent job of performing these radicalised versions; one highlight is ‘Combattimento Di Gaca E Meto’ which starts out uncertain and disjointed, wallowing in fine post-modern doubt, before turning into a spirited jig after some three minutes, signalled by an impassioned roar from one of the band; the drummer lets rip and the strings fly past at 90 mph. As already indicated, Radical Polish Ansambl claim to be blending the mazurka tradition with “the most avant-garde elements of contemporary experimental music”. To this end, they quote a 1952 John Cage lecture on the inner cover, and they also invoke the name of one Tadeusz Sielanka, a shadowy figure who supposedly was one of the country’s leading composers in the minimalist mode.

In their publicity blurb, the Ansambl cite just two sources for Sielanka, one of them suggesting he was a folk violinist who was recruited into the Polish army during WWII. The other source informs us that his work shows up among some musical annotations in the public archives in Delhi, and by a circuitous route it seems that Sielanka was engaged on a project showing the links between mazurka and Indian raga. I’m afraid I found all this too good to be true, particularly as there are two tracks attributed to this Sielanka on the record, one of them called ‘Mazurka In C’. My theory is that the whole story is invented. Sielanka is not a common Polish surname; it’s a noun, which translates as “paradise” or “idyll”, a word which coincidentally also features in their press – a “utopian attempt” is how the describe their project. Had there indeed been a Polish representative of minimalism active in the 20th century, surely history would have recorded a more lasting trace of it? Calling a composition ‘Mazurka In C’, invoking the work of Terry Riley in this context, is also just wishful thinking.

Even so, ‘Mazurka In C’ is a very strong piece, probably one of the best on the record; I’m not sure why someone felt the need to invent this rather unconvincing hoax to bolster the music. This quibble aside, a fine item. From 19 December 2019.