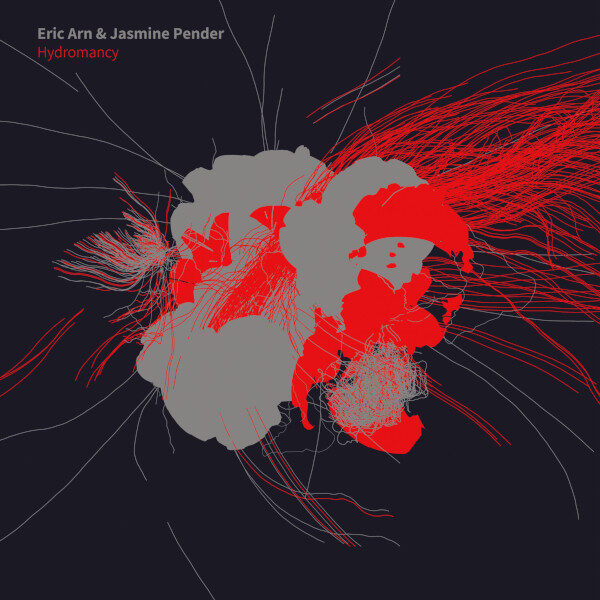 On the LP Hydromancy (FEEDING TUBE RECORDS FTR493), we have two side-long instrumentals performed by Eric Arn and Jasmine Pender, wrapped in a cover of abstract art of silver and red that might depict an imploding brain, or selected chunks of satellite data recast to render a grim forecast of the end of the world. We might be about to enter a world that’s an update on Tangerine Dream’s ‘Journey Through A Burning Brain’.

Eric Arn was the fellow who briefly supplied guitar licks for The Crystalized Movements (appearing on their 1987 LP Dog…Tree..Satellite Seers), but may be better known to some as a member of Primordial Undermind, The Outsideinside, and guest player with The Magic Carpathians. As such, he’s a psychedelic-influenced noise guitarist worth paying attention to with your paisley ears. English player Jasmine Abigail Pender meanwhile is a member of Rotten Bliss and Eleventh Hour Adventists – the latter being a recent phenomenon which amazingly features Jowe Head from Swell Maps and Television Personalities. Not heard either of these acts, but Pender is a vocalist and plays piano and cello. The duo met at a festival in Austria (Arn now lives in Vienna), played live, and made this record in 2018. On side one here, ‘In Illo Tempore’ may be slow and understated, but is emphatically not a cold exploration of ambient textures; there’s some deep and rich performances going down here, and in places one can make out some hefty slide guitar action being deployed to render chasm-like swathes in the ether.

So far we have something like a less harrowing version of Michel Henritzi, and the studio treatments on Hydromancy are used to create just the right amount of frisson and iciness. Indeed as we reach the closing passages, the duo inadvertently create a form of music that could be mistaken for “spectral” composition or the microtonal clouds of a Ligeti orchestral work. Flip over to hear ‘The Serpent Ophis’. Ophis is a Greek word which simply means “snake”, and was often applied to rivers, but it would be nice to think the musicians had in mind the Ophi legends associated with a bit of turf near the mouth of the Tagus (now part of Portugal). At the summer solstice, it seems that a snake goddess would appear in the Land of Serpents (as it became known), and point out where to find hidden treasure to anyone wandering in the forests. For this piece, Arn and Pender switch to a more up-tempo mode and are soon grinding out a hypnotic, monotonous riff where all the frequencies merge into an iron block of sound. There’s also a tinge of menace and fear which isn’t as noticeable on the more benign A-side. In following the coils of their chosen serpent, the duo remain resolute in their musical quest with this single-minded, obsessive music; stay with them and you too may discover the hidden treasure.

All done live, with very little editing and no overdubs and no post-processing; there’s a lot of understated skill and musical craft at play here. This is the third LP from Feeding Tube showcasing Eric Arn’s work, previous outings being Orphic Resonance and Paranza Corta. Arrived 1st April 2020.