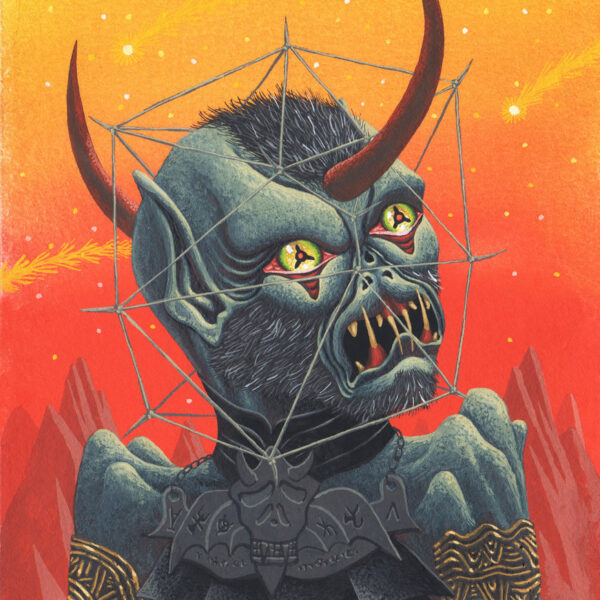 I thought I had heard more than enough deranged black metal acts from France to last me one hundred life-times but that was before I met this mysterious solo blackened death metal act Esoctrilihum, helmed by one Asthâghul, who sweeps his fellow strait-jacketed black / death metal citoyens into the dust with his monumentally crushing and maddeningly complex and dense music that takes in folk and psychedelic prog-rock influences. “Eternity of Shaog” is Esoctrilihum’s fifth album in four years – this act arose in 2017 – and has a theme of demonic possession and psychic transmutation: the omnipotent vampiric god Shaog, residing alone in a universe parallel to ours and imprisoned in a cage for crimes innumerable and unspeakable, as depicted on the album’s front cover, comes to possess unsuspecting travellers who invade his cosmic realm through dreams or similar unconscious states. The influence of H P Lovecraft’s short stories and novellas based around the Cthulhu mythology is strong.

Every track is an opportunity for Asthâghul to steamroll innocent and naif listeners into Shaog’s hell with a barrage of insane machine jackhammer percussion (mercifully muted), layers of grinding acid-edged guitars and a mix of synths, piano, violin and kantele (Finnish zither), all topped by monstrous gnashing vocals from an oesophagus where rocks are continually being crushed and ground down and mixed with particularly corrosive stomach acid. The surrounding atmosphere is dark and cold, and highlights the music’s oppressive and demented nature. For all its sonic textural complexity, the music is actually very well crafted and the songs show much meticulous care and thoughtful attention. Every tone, every effect, every layer of sound adds another level of depth and nuance to the insane existence of Shaog and the universe in which the demon dwells. Listeners can’t help but be drawn into this mad, soul-crushing world; the music is incredibly immersive, demanding every iota of attention to its many levels of rhythm, riff loops, melody and ambience. Amazing to think that the concept behind the album, the songwriting, the eclectic choice of instruments played and the performances, arrangements and recording are all the work of one mysterious musician.

The album can be quite an endurance test the first time through but repeated hearings reveal distinct songs, some of which (the last track especially) even have pop-friendly melodies under the stomping machine rhythms, headache-inducing percussion and general deranged attitude. The gravel-crunching vocals can be cartoonish at times and it is a wonder that there are no other voices within Shaog’s mad and thunderous realm. The acoustic instruments used provide interesting and clear-toned sonic contrasts with the rest of the music and themselves are also a highly idiosyncratic choice that helps to set the album apart from other works with similar themes of alienation, madness, demonic possession and the Lovecraftian ethos and what it embodies about the nature of evil in a universe indifferent to notions of good and bad.

This is a rich and intense work, absolutely bat-shit insane and stuffed full of the most thunderously powerful and frightening riffs, relentless machine percussion and the most gargly guttural vocals generated outside a fish tank. All tracks (most of which are portals into Shaog’s realm) are good but the one song that stands out as the most representative of a deranged collection is “Aylowenn Aela (3rd Passage: The Undying Citadel)” for its weird and twisting Middle Eastern-sounding violin melodies. In a year of French BM Golden Age brilliance, this album shines as one of the brightest highlights.