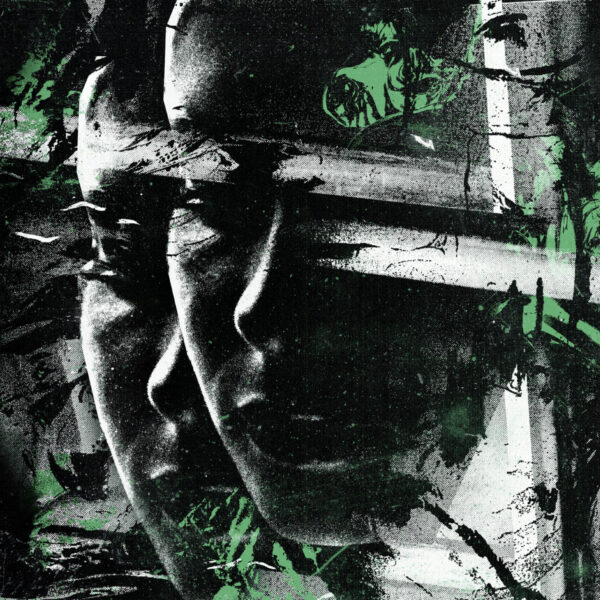 Not so long ago I heard “Champ du Sang / Field of Blood”, the debut album from blackened sludge doom metal duo Vous Autres (based in Nantes, France) and found that recording impressive in its bleak cavernous atmospheric style – dark, immersive, oppressive with its industrial metal bent – though the individual songs were not very distinct from one another. The band is back with second album “Sel de Pierre / Salt of Stone” which is much bleaker and more melancholy than the first. Vous Autres is still as powerful and crushingly dark and oppressive as ever though the sludge doom style is edging close to post-metal. The first album may be longer and feature more songs but this recording, while two-thirds of the length of the first, manages to be even more intense and dark, and moreover features more varied music, taking in ambient instrumental tonal work with birdsong field recordings and keyboard-based prog-rock noise drone.

Listeners are plunged into the deep end of Vous Autres’ depressive pounding vision with “Onde”, the torture supplied by sledgehammer percussion beats and hellish tremolo guitar riffing. Harsh demonic voices screech from behind a veil that renders the vocals corrosive and crumbling. Guitar riffs and melodies crunch and crash like cliffs falling into the ocean after heavy battering. The punishment continues for much of the track save for a brooding instrumental passage in its second half but even here the mood is intense and heavy. The dark oppression continues into “Vesuve”, an even more bleak and unbearable juggernaut of sludge doom and screechy tormented BM vocals swirling in the acid steaming black background. The distinct cave-like atmosphere of the song, the pain present in the singing and some of the clean-toned guitar melodies, etched against the grinding music, make this song incredibly sad and deeply affecting.

Subsequent tracks become quieter and more ambient instrumental, and here the music becomes a genuinely malevolent soundtrack to an all-pervasive panopticon police state whose tyranny relies on embracing anyone and everyone within its tight hold, prying into every corner of a person’s being. Machine rhythm and effects become dominant to the extent that this part of the album is as much blackened industrial as it is doom. The last two tracks on the album are almost entirely instrumental ambient pieces with a bleached sound and production that render them as bleak and crushing as previous tracks but which also admit a smidgen of hope and optimism that maybe there is a way out of the darkness.

Some listeners may gripe that the album’s early jagged crunching aggression dissipates too early and the songs coming after “Vesuve” lack heaviness. The later songs may come as a surprise to Vous Autres fans expecting their heroes to deliver wall-to-wall paint-stripping blackgaze sludge doom terror but I think for their own sake the VA musicians do need to vary their style and demonstrate the music’s adaptability to encompass influences from wherever VA needs to be if the project is to remain forceful and vital. The second album does give indications that the Vous Autres project is in transition from a base of epic blackened depressive sludge doom with industrial influences to a style of music that is likely to be very eclectic, individual – and not at all predictable.