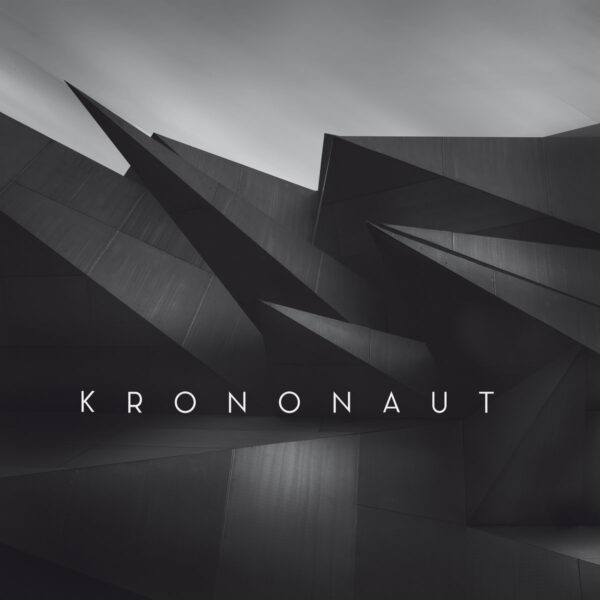 Krononaut is a new experimental jazz ensemble revolving around the core duo of classically trained guitarist Leo Abrahams, who has cheerfully admitted he “can’t play jazz”, and drummer Martin France, who in the past has played with Evan Parker and Nils Petter Molvaer among others so we can safely assume he can play jazz and play it very well too. Recently the group released its debut self-titled album with a highly arresting front cover picture of sharp and clean-lined triangular shapes. The music, all improvised experimentation performed live with no overdubs save for Arve Henriksen’s trumpet additions on some tracks, is similarly clean and clear to the point of sounding sparse and minimal on most tracks. Additional musicians in the sessions include Tim Harries and Shahzad Ismaily, both on bass guitar but not on the same tracks, and Matana Roberts on saxophone on the last three tracks.

The album sounds very much like a compilation of instrumental pieces that could have been recorded at different times in the same studio under the same or similar conditions – even though it was all actually done in two sessions in London earlier in 2020. Each of the ten short tracks (with the exception of the seven-minute “Convocation”, none is longer than five minutes) is very different in the mix of instruments used, and in the sounds, textures and moods generated, and as a result the whole album when heard in its entirety straight through can seem rather inconsistent and patchy. The only thing the tracks have in common is a very spacious clarity that can be dark and even a little menacing at times thanks to some very unusual rhythms and beats courtesy of France’s inventive drumming and Abrahams’ wicked ways with guitar and studio electronics. The two musicians’ creativity really comes to the fore in “Power Law”, relatively loud, busy and even a bit noisy compared to the rest of the music, and filled with urgency and an uneasy attitude to boot.

Generally the first half of the album up to and including “Power Law” has the most varied, interesting and attractive music, with as much experimental electronics involved along with some non-Western-sounding rhythms and structures – Abrahams’ music has been influenced by madoh, a genre of religious music associated with the Tajik people of Tajikistan and northern Afghanistan – while the second half of the album is more relaxed and more strictly jazz-oriented. Perhaps because most tracks are short, they hit their peak early in terms of mood and ambience and then coast along; the exception is the long track “Convocation” which because of its length and loose quality – so loose that the track barely hangs together for much of its length, with maybe just a lone sax note holding on or a bit of cymbal shimmer maintaining its vital signs – does generate a continuously evolving and sometimes moody and shadowy soundscape.

Overall this is a very pleasant recording, perhaps not nearly as consistent and energetic throughout as it could have been, and for most people the first half of the album will be far better as a listening experience than the second half. The stand-out tracks are “Mob Kindu”, “Leaving Alhambra” and “Power Law” for their use of electronics and the ideas and influences Abrahams and France bring.