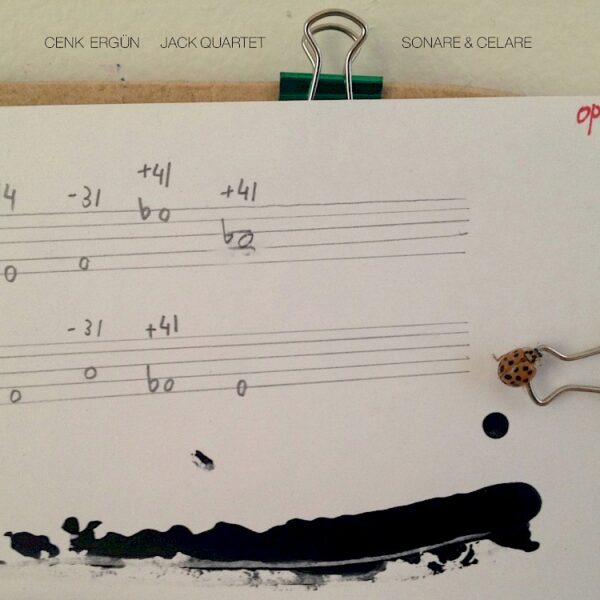 Cenk Ergün is a Turkish-born composer who we may have heard a long while ago on The Art Of The Fluke, a joint work with Alvin Curran, the American composer of MEV fame. Ergun is here today with two works, Sonare & Celare (NEW FOCUS RECORDINGS FCR 238), played by the JACK Quartet of string players and released on the American label New Focus Recordings.

Cenk Ergun has been known to do electronic and computer music, and has improvisation skills, but here he is scoring and notating (I would assume) to produce microtonal effects for the strings, aiming at building “masses of sound” for a hypnotic effect. The two short pieces were written expressly for the JACK Quartet, and are intended to stand in stark contrast to each other. Sonare is the “fast” piece, almost alarmingly so; it induces panic in the same way as the Bernard Herrmann strings for a Hitchcock movie, and the foursome have at it at a breakneck tilt. Even so, within the short space of 11:37 mins, the composer achieves much; constructing many layers of events, giving the ear multiple things (too many things) to focus on, whether that’s galloping rhythms or short, repeated patterns. It may sound like I’m suffering through this Sonare, but there’s much to enjoy in its invention and concision. The realisation of the work has involved a lot of effort; he made recordings of the string players executing short, repeated sections from the first compositional sketches he had on his bench, then put these into his computer to arrange new shapes, patterns, and materials. He painstakingly transcribed this digital work back into sheet music, and that became the finished work; the process that’s relevant here is one of “back and forth between audio and notation”, as he describes it; a careful process of building. He speaks of constructing a “rhythmic grid” wherein are contained machine-like repetitions, which we can observe like the movements of several clocks.

The Celare piece is quite different – slow, almost soothing in its porous nature, with plenty of time for the listener to digest its ghostly tones. His studies of just intonation, Turkish music, and early music have all fed into Celare, and the trajectory of the work moves towards a user-friendly series of blended and sustained chords. If you know more than I do about these very specific musical histories and genres, the achievement of Cenk Ergün will be clearer to you, but even I can discern the ingenuity of the structure here, one that can accommodate the clarity of a Scarlatti (who is namechecked) within the permissible dissonances of just intonation. It’s impressive that he can do all this without the music calling attention to itself, and attain a pleasing aesthetic result to boot. I guess on the strength of this Cenk Ergün is all about “form” in his composition, and neither piece contains much discernible content, meaning or external reference outside of itself, but is none the worse for that. Arrived 16th March 2020.