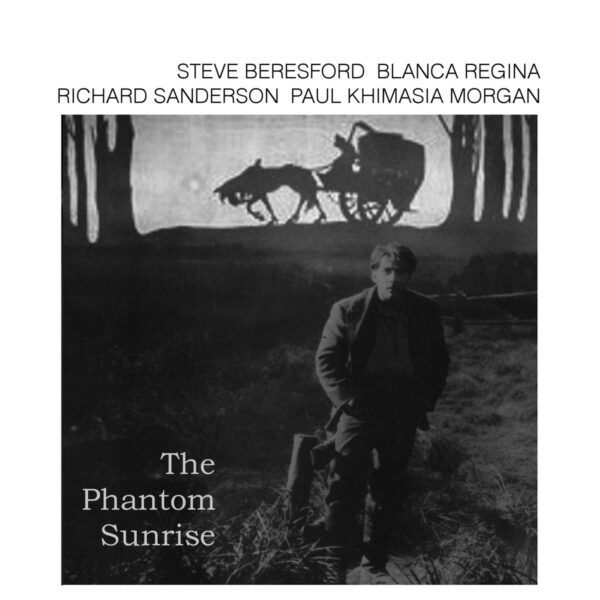 Released under the auspices of Paul Khimasia Morgan we have the fine record The Phantom Sunrise (AURAL DETRITUS audet007), documenting an event organised by himself as part of his “Aural Detritus” concerts which took place in 2017. He joined the UK musicians Steve Beresford, Blanca Regina, and Richard Sanderson, in performing live improvised soundtrack music for two silent films: Körkarlen and Sunrise. Körkarlen, aka The Phantom Carriage, was released in 1921 and came over time to be regarded as an important piece of Swedish art-cinema; despite its title, it’s not I think a horror / suspense movie, but is notable for taking liberties with narrative structure (layered flashbacks) and apparently makes use of double-exposure too, which sounds quite experimental. As to Murnau, he did of course provide cinema with one its more famous “phantom carriages” sequences when he made Nosferatu in 1922; the later Sunrise is more of a morality play telling us something of the eternal war between good and evil, as it plays out in the context of a marriage. Our four players did this live in the Kino-Teatr venue in St Leonards-on-sea, which stages music, cinema and opera events; it’s a building with a 100 year-old history, and the interior where this tooks place (a domed screening room) sounds positively sumptuous.

It so happens we recently noted 900RPM, the Berlin trio who also produced a soundtrack for a silent classic from German Expressionist cinema. Their music couldn’t be more different to what we hear on The Phantom Sunrise. Beresford, Morgan, Sanderson and Regina create two suites of delicate, semi-acoustic, almost enchanted music, as limpid and ephemeral as the flickering images which accompanied it. While the music is self-evidently all improvised, it’s arguable that it serves very well as soundtrack music; the players responding in sympathy to dramatic changes on the screen, and at the same creating music that stands up on its own, and can be played at home as a splendid and enjoyable record. This might be because of the user-friendly elements, two of which are the occasional flourishes of melodies and tunes which emerge, I’m assuming, from Beresford’s keyboards; and the human voice components, supplied by Blanca Regina with her non-specific whimpers and murmurs. Nothing like a voice to make free music that shade more accessible; one might almost say it stands in for the dialogue of the films, which probably appeared on title cards. There’s also something episodic in the way the record is structured, with silent breaks perhaps standing in for reel-changes; put this down to Morgan’s deft editing. Beresford’s amazing career has included commercial work for TV and film, and this particular performance might be said to balance this professionalism with his long-standing practice in free improv; Regina, likewise, works with audio-visual in the form of installations and cinema, and her research encompasses music, performance, and improvisation.

I seem to be nudging Sanderson and Morgan to the more “abstract” side of the stage, which wasn’t exactly my intention, but it’s possible to characterise a lot of their stage work as quiet, understated, making judicious use of the drone; Sanderson does it with electronics, percussion, and his weapon of choice the melodeon; Morgan goes even further out into “quiet noise” zones with his resonating acoustic guitar and feedback set-up. Together, the foursome of gifted individuals make an extremely harmonious blend and pleasing sound; the two pieces here are mesmerising examples of trancey-improv in a largely acoustic mode. If you believe in the power of cinema to hypnotise its audience, this is the record for you. From 13th March 2020.

The title of this post is a reference to the 1955 book by Lotte H. Eisner, a definitive study of German Expressionist cinema.