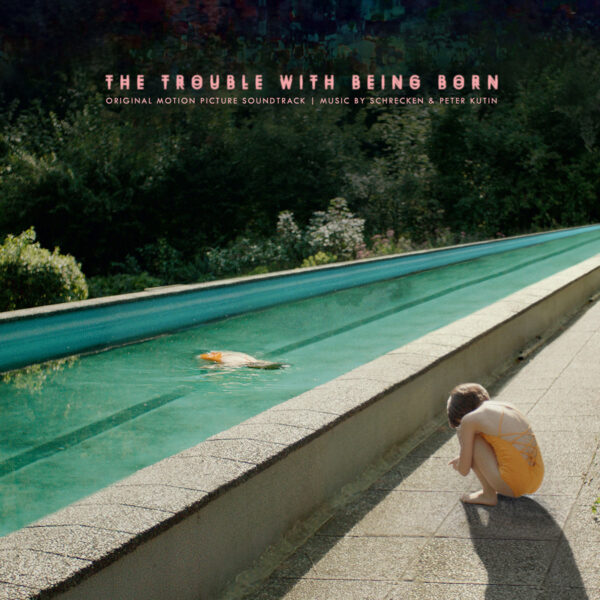 From the Ventil Records label in Vienna, we have The Trouble With Being Born (VENTIL RECORDS V_013) by Schrecken and Peter Kutin. Always good to hear from Kutin whose music we’ve been hearing since around 2016, and I tend to associate it with a very severe form of avant-techno blackness and paranoia (‘How To Inhale Water’) or with the even more extreme noisy sound-art of his Decomposition projects with Florian Kindlinger. Today’s record is in a different place, though. It’s music used as the soundtrack for a film of this name by the Austrian Sandra Wollner, which is an “unsettling” piece of cinema by some accounts, a metaphysical investigation of the meaning of identity, using the “child android” trope made popular by Spielberg with his A.I. movie. The mood of today’s record is accordingly one of sombreness and ambiguity, with many long and understated dirges of electronic music proceeding towards an inescapable destination. Something of a mixed bag, as there are songs and spoken-word interludes on the album too; my own preference is for the abstract instrumental sections, but the songs are the work of Schrecken who is David Schweighart, who plays many instruments but is also a singer-songwriter. He has an interesting take on the lugubrious country-and-western singer style, filtered through Nick Cave and the Paris, Texas movie, which may be just right for the film; likewise these distorted versions of jazz-cabaret songs, where vocalists Pippa Galli and Adele Knall may assist. Speaking of Paris, Texas, it’s these Schweighart sections that made me think we were hearing a Wim Wenders soundtrack from the 1980s. From 3rd April 2020. From Marseilles, Ed Williams arrives with his album Solos (CREATIVE SOURCES RECORDINGS CS 618 CD) on which he performs on bowed guitars. This fellow also plays the harpsichord, is an improviser and composer, and member of the ensembles Heard Of Bears (whose gimmick is to invite a new musician to play with them every night), TANDEM, and the Grand 8 Ensemble – a 20-piece band of strings, brass, vocalists, guitarists, and more. I see he’s received higher education training in music and studied electroacoustic composition at Cité de la Musique. He turns in two sets on the electric guitar, both making very effective use of lower register notes which cause quite a rumble in the ribcage. If it’s textural scrape and abstract groanings you’re seeking, along with suggested clouds of harmonics floating like soap bubbles, you might prefer the second part of ‘Aux Soirs Du Chercheur De Noise, Marseilles’, as it leads the listener into a profound contemplation of the mysteries of the night sky, while also leaving space for quieter reflections and reveries. On the other hand, the first part has a slightly more abrasive tone and proceeds to a vaguely chaotic, disconnected ending, which is enjoyable. In between these two electrified honkers, we have ‘Spectrum, NY’, which was performed on a classical guitar (hence, presumably, acoustic) and our French hero continues to apply his scraping bow with nuanced, subtle passes of the hand and arm. Oddly enough I find this one the most accomplished of the set. Among the alien sounds and noises, more conventional ripple-picking is also permitted in the schema, and parts of this glorious 18:37 improvisation almost rival the sound of a classical orchestra playing “spectral” music by Grisey or such. He also veers towards the unusual guitar soundworld once staked out by Hans Reichel on his landmark FMP records, particularly with the odd tunings. At this point we would remind you it’s all Williams playing solo and that he uses no effects pedals, generating all these fine drones, notes, textures and harmonics by means of old-fashioned craft and technical skill. Excellent. From 7th April 2020. Hear from German solo creator Markus Mehr in 2018 with his Liquid Empires release. Sadly that item didn’t do much for me at the time, but this may be because I perceived it as a lacklustre attempt at electronic melodic pop tunes with an avant-ish twist. For today’s cassette, Brief Conversations (HIDDEN SHOAL RECORDINGS HS215), our man has gone whole-heartedly down the “sound art” route and turned in two sides of pulsing, resonant drone with a conceptualish edge. The source material has all been derived from “room sound”, he claims, as part of an experiment to explore the acoustic properties of the spaces in which we dwell. The meat of the work is done in the computer, though; he describes the reprocessing work as “alchemically blend[ing]” the recordings into “mesmerising ambient environments”. Through this, he intends to reveal the fine detail about acoustic space, concerned that we’re overlooking something important and these microscopic details may hold useful information, which we’d be unable to perceive were it not for his marvellous intervention. I’m prepared to believe, as Mehr asserts, that individual rooms, spaces and buildings do indeed possess some indefinable characteristics, which he terms the “acoustic fingerprint”, but I’m also frustrated by the fact that every track seems near-identical to the last one. So if there were any distinct properties, he has singularly failed to capture them, or (far more likely) bled them away in the bowels of his computer as he got carried away with his filters and processors. One wishes for a bit more depth in his scientific probity of the acoustic world; perhaps a list of the rooms / buildings in question would have helped, along with an explanation about why they mattered to him. This might have brought us a bit closer to the two-way “conversation” he evidently wishes for, entering into a dialogue with the rooms. Even so, one can’t call this a typical record of ambient drone; although samey, slow, and steadfastly cryptic in its refusal of audience engagement, Brief Conversations does have many moments of originality and unusual invention in amongst the general drear. From 20th April 2020. Swiss vocalist Dalia Donadio has performed and recorded quite a few times with Tobias Meier in the past, but here she is on Tobias’ label Wide Ear Records performing with the guitarist Urs Müller and the bassist Raphael Walser. The record is called Poem Pot Plays Pantano (WER045) and it features the poems of Daniele Pantano, drawn from the collection Dogs In Untended Fields, used as lyrics. It’s tempting to regard this set-up – voice, guitar, and bass – as an update on the classic format used by Julie London on her debut album, but it’s not quite as simple as that. True, there are moments on the album where Donadio touches on jazz styles and Müller strums a major-seventh chord; and some songs have the yearning quality of a “torchy” singer familiar to fans not just of Julie London, but also early predecessors like Fanny Brice and Ruth Etting. She evens scats and extemporises her way into a wholly unexpected zone with the force of a Patty Waters, on the track ‘Morning Walk’. But it becomes clear that Donadio and her instrumentalists are in pursuit of something much darker and deeper, and very 21st century; what may begin as a conventional song ends in uncertainty and doubt. Some pieces, like ‘Vaudeville’ with its striking opening line “See the butcher’s son lose faith in his knives”, start out in dissonant chaos and noise, and gradually form into a coherent song. So, while Donadio may flirt with blues-inflected cadences, she’s probably trying to climb up to the plateau inhabited by the late Scott Walker, using the poems of Pantano as rungs in her ladder. There’s also discernible avant-rock and noise influences in the guitar work of Urs Müller, and Raphael Walser’s restless bass stabs would be at home at any given FMP group energy-session of the 1970s. As to the poet Pantano, his work here is trying to say something about “exile and translingualism”, specifically in the context of living in Switzerland; these concerns may reflect his German-Sicilian parentage. I welcome the specificity of his semi-political concerns, but he uses so many symbols and allusions, it’s hard to perceive where he stands. All the libretto is printed on a fold-out inset and the record is housed in a sturdy screenprinted card cover. From 2nd April 2020. Italian ambient artist Giulio Aldinucci with his third release for Karl Records, Shards Of Distant Times (KR076); we noted his last item Disappearing In A Mirror, full of “overwhelmingly sad and wistful” sounds. He follows much the same form here, with short and static tracks that last for around 5-7 mins, then vanish. Evidently much time and effort is poured into these albums, and Shards has been sound-designed to the limit, no surface left unburnished and no layer left unprocessed. We’re asked to pay attention to his composerly and arrangement skills, though I suspect most of the work takes place inside the computer. One aspect of his method involves blending ambient music with field recordings, which is now a very commonplace practice; his plan this time is to use more “human voice” related sounds, and indeed a number of tracks do resemble a celestial choir vaguely manifesting itself in some non-space which could be anything from a storm-filled sky to an empty desert. One cannot help but imagine tasteful slow-motion helicopter cinematic sweeps to this genre of music, and Aldinucci clearly doesn’t refuse the association. I fail to see how this elementary compositional stance qualifies this record as something that “deals with philosophical concerns”, a claim which strikes me as unearned and not a little pretentious. Not unpleasant overall, but these sounds are just so familiar nowadays; it’s hard to detect any authorial intention or much human personality in these grey, identikit drones. From 17th February 2020.