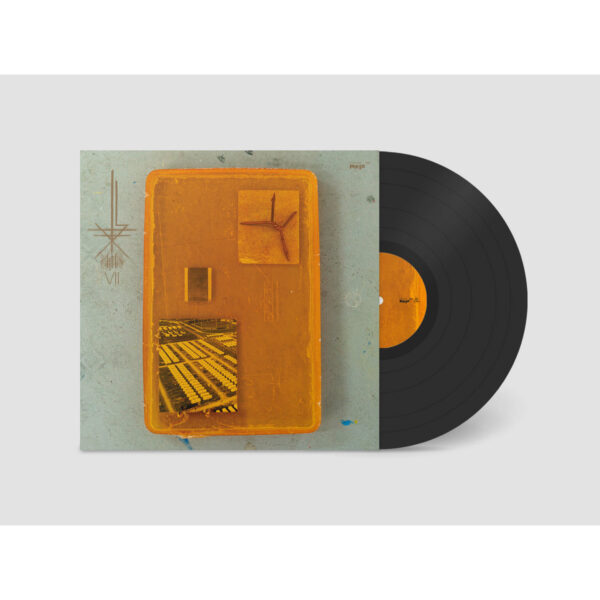 For a project initially established to provide music for a puppet play “Kindertotenlieder” by French puppeteer / choreographer Gisèle Vienne some 13 or 14 years ago, KTL sure have come a very long way. After all this time and many releases and performances later, along with those of their other projects, the duo have a fresh and vital sound that still sends thrills and chills up and down listeners’ spines. KTL’s seventh full-length studio release, simply titled “VII” and unrelated to any theatrical or cinematic work or art installation, having been recorded during the COVID-19 pandemic lockdown, seems to be pushing their music of dark drone terror to extremes beyond what even they, Peter Rehberg and Stephen O’Malley, might be able to tolerate. Introductory track “The Director’s Cut” alone does a good if rather prolonged job of separating the poseurs and superficial wannabe types from the die-hard fans: this extended shrill screed of noise electronics drone keeps going higher and higher, and when your ears are screaming that the sound just can’t go any higher, laws of physics making that impossible, there it is continuing far into the firmament with even its trail almost out of reach of powerful telescopes.

No matter how noisy and glitchy-gritty the music so far has been, it also seems supernaturally calm and controlled. A sense of humour may also be at work behind the Olympian structures built up by the two. “Silver Lining” is an excellent example of the control PITA and SOMA exercise over their instruments as the sounds escalate and a wave zooms up and down astronomical heights. One hopes that if there’s a landing, it will be soft. Subsequent tracks, even a short one like “Lee’s Garlic”, highlight the immense and monumental nature of the soundscapes and their varied moods that KTL cast out from their finger-tips. At this point in the album, the music makes a break with the earlier serene tracks and enters a darker, less certain realm. “Tea with Kali” might initially be the most low-key of the lot but even that track boasts some very unsettling and penetrating passages of sound experimentation. “Frostless” turns out to be the most disorienting and frightening track of all as nauseous drones waver from one extreme to another and sinister acid crunch noises keep distracting your attention.

Recorded in Berlin while KTL were stuck there due to lockdown during the northern spring of 2020, the album perhaps expresses the musicians’ frustrations, anger and fear in a context in which what was once taken for granted – the freedom of movement, control over one’s life, a sense of overall security – has been swept away and replaced by uncertainty, claustrophobia and a feeling of being in free-fall in something dark and menacing. This is powerful work, full of mixed malevolent emotions and sharp mood. If the COVID-19 pandemic has had unexpected positive effects, pushing artists like KTL to produce some of their best work if not their very best is undoubtedly one such effect.