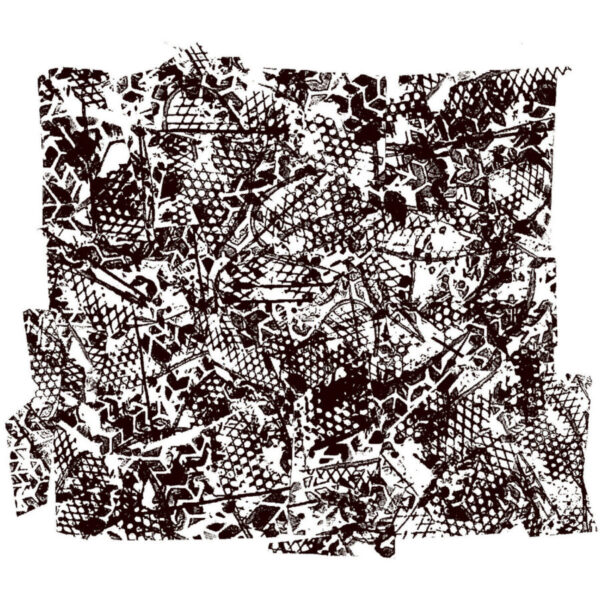 Seems like ages since we has a packet of noise-goodness from the Bristol label LF Records run by Greg Godwin / dsic, and not sure if anything has arrived to roughen up my bark since the three volumes of Crude Computer, which were hammered into the surface of CDRs in Feb 2019 and caused a spike in psychological anxiety for many across the globe. Today we have a record from Nobuo Yamada, noted Japanese “noiser”, with a record called 14 Course Grained (LF RECORDS LF066), a record which lives up to its title and delivers four-and-ten episodes in the crumbly-noise mode.

We have heard Yamada many years ago when he teamed up with Richard “New Blockader” Rupenus, but he’s also clenched his mailed fist with Richard Ramirez, one of the fiercest and most objectionable of the international harsh-noise set. Seems that Yamada is a “metal” man, deriving most of his sounds from discarded scrap metal, although other choice items of garbage and junk may figure in his magpie-styled swoops, as he gathers what he may from the junkpiles of the Saitama prefecture. Another fellow who recycles junk is Tarab, although his records sound completely different to this one, and he probably has an ethical / environmental aspect to his work too. Conversely, Nobuo Yamada has his eye fixed on the abstract noise target, and in the reprocessing work that he does, he manages to find hidden voices in the very material he handles – hence the “grain” of Course Grained. As the label notes have it, we’re hearing “exposed messages from a buried civilisation”.

The other things I like about this record is its ambiguous, malleable nature – none of the harsh-noise walls of feedback for him, nor the relentless pummelling of a Merzbow with loops and sequencers which damage your brain and choke your windpipe. Every one of these Yamada tracks presents a slightly different aspect of the plan, with plenty of dynamic range, interesting textures, thoughtful explorations of the potentials of the material. Doubtless, electronic effects and other enhancements must play a part in all this, but I’m sensing a real honesty and directness in the way our man manipulates his blocks and lumps, and that in some way we’re beholding the “truth” about a broken air-conditioning grille or a shattered carburettor. If this is halfway true, then perhaps the work of Nobuo Yamada isn’t too far away from the more formal experiments of Pierre Schaeffer and his followers. The record uses 2003 recordings, reworked in 2018; CD arrived here 7th April 2020.